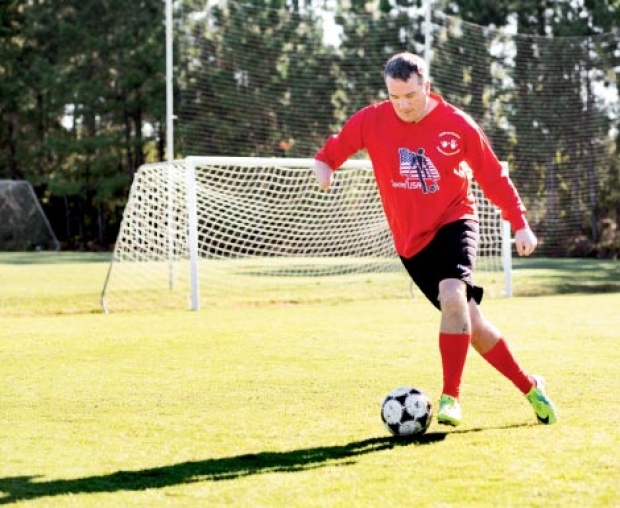 You’d never think of him as an amputee, and that’s just how he wants it. He’s an athlete—and playing soccer speaks a language of social change and awareness for his fellow amputees. “I want people to see that I’m not an athlete missing an arm, but I’m an athlete with an arm and I play hard, and I play to win,” he says.

Westover, 42, plays for the U.S. National Amputee Soccer Team and serves as VP of the American Amputee Soccer Association (AASA). He lost his right arm below his elbow in 2004 after repeated surgeries were actually doing more harm than good. He developed Type II Complex Regional Pain Syndrome (CRPS), or Reflex Sympathetic Dystrophy.

The original injury to his median nerve and right wrist occurred in 1992, when he was working for a company that rebuilt photocopier drums in his home town of Minneapolis. Because of the medical costs and no worker’s comp coverage, Westover said he lost everything, including his house, job and marriage.

“God had his hand on me and has directed everything that’s happened, so I wasn’t angry about losing my arm,” he says. “It was so long that I had suffered through it; I had a party when the insurance company finally agreed to the amputation.”

Through the strength of his faith, Westover found his way back into life fairly quickly. He played a golf tournament left-handed two weeks after the amputation and got a job at Caribou Coffee, where he worked for a couple of years. But starting a national non-profit for upper extremity amputees called UpperEx is perhaps his greatest success. UpperEx offers support to patients and families of this often neglected portion of the amputee community via newsletter, website and speaking engagement appearances for wounded warriors at the Walter Reed Army Medical Center, located just outside Washington, D.C.

Westover struck the right chord with patients as a walking, talking, caring resource, which led to him acting as a consultant for non-profits. As an outspoken disability advocate and lobbyist on the local, state and national level, his involvement led to his recruitment to the U.S. National Amputee Team in 2006.
“My challenges have definitely turned into opportunities for me,” he says. “So many things have happened to me because I lost my arm that would’ve never happened had I not lost it. I have the honor and blessing to impact people’s lives through my story and the beautiful game of soccer. I’ve always said that if I had the choice to do it all over again, I wouldn’t change a thing.”

Soccer seems to be a perfect combination of showcasing his playing ability and his tenacity over his disability. Westover has played soccer since he was 8, but because of his long legs, the coach played him as a sweeper. He did, however, play goalie in hockey for more than 15 years.
“There’s nothing like having the honor of representing my country as the starting goalie of this team,” he says. “Stepping onto the pitch and all the emotions that come with it. … Every time, it gives me goose bumps.”

Westover got remarried to his soulmate, Shawn, and, to escape the frigidly cold weather in Minnesota, they moved with teen children Paige and Dylan to Myrtle Beach in 2008, where Westover can play soccer year-round.

Faith has followed and is a huge part of Westover’s life on the Grand Strand. He attends Beach Church and serves in several different ministries, including technical arts (spawned from his past experience with his theatre light and production company) and Celebrate Recovery. “I also have the blessing to speak to elementary, junior and senior high kids through the Fellowship of Christian Athletes,” says Westover.

Not only does he play and tour with the national team, Westover is also responsible for management and development for soccer clinics, demos and exhibition games, like one versus Haiti in Washington, D.C., this past summer, another in Mexico in April and the World Cup every two years. The governing board is in the middle of scheduling winter clinics in Charleston with the Charleston Battery soccer team. “We just beat an able-bodied team in July at the Schwan’s USA Cup,” says Westover.

Rules of the game (seven to a side) are the same, but field players must be lower-amputees—most play with four-leg crutches—and goalies have to be one-arm amputees that can only play with their good arm. It’s a shorter field and the goals are a little smaller, with kick-ins instead of throw-ins. “Otherwise, it’s all the same,” says Westover. “It’s just as rough and tumble, dangerous, and people are sometimes taken out on stretchers. Field players can run just as fast as I can! We’re showing people that we’re here and our lives are not over, which is great for new amputees to see and a great form of rehab.”

The only drawback is that players must pay their own way to travel to games around the globe, so Westbrook says they’re always looking for donations and ways to raise funds. Recent exposure like the interview with AASA player Nico Calabria on CBS Evening News and the AASA’s recent Facebook win as the “Loopy for Charity” recipient from Southern Baked Candle Company out of Columbia, S.C., ($10 from every fruit loopy candle sold goes to the AASA) helps.

And every donation helps the greater purpose of AASA and Westover’s greater purpose. “God continues to put people into my life and orchestrate all these things for a reason and purpose,” he says. “And though I may not understand them right now, I trust that He is doing what’s best for me so that I can do His will. One of my favorite verses is Jeremiah 29:11, ‘For I know the plans I have for you,’ declares the Lord, ‘plans to prosper you and not to harm you, plans to give you hope and a future.’ Looking ahead, I know that God will continue to use me. … I just need to be prepared and be listening to Him and He will take care of the rest. … Win or lose, all the glory goes to God. He gave me everything I needed to get here.”