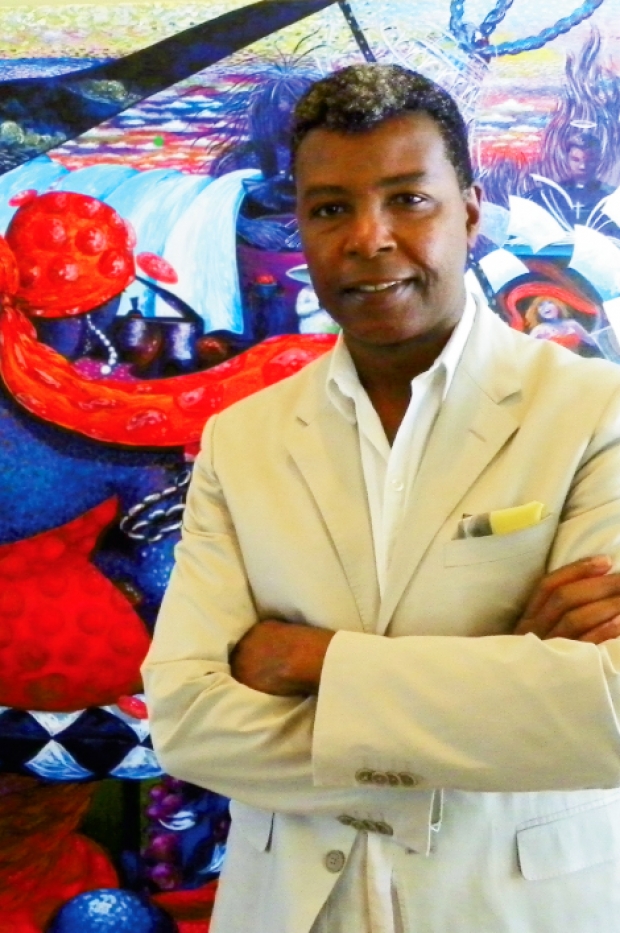 With their signature elements of bold color, Lowcountry locales and African Americans engaged in work and leisure, Jonathan Green’s paintings are instantly recognizable. Green’s artistic presence peppers Pawleys Island, permeates Charleston and spans the nation and the world, including major museum exhibits in California, Pennsylvania, Japan and Sierre Leone, Africa. He’s one of South Carolina’s most widely renowned artists, yet this painter is interested in more than simply depicting the Gullah culture; he wants to change the way people view the South.

Born near Beaufort, S.C., in a small town called Gardens Corner, Green’s upbringing was steeped in the Gullah tradition that included an extended supportive community. From an early age, his interest and talent in art was positively received by teachers and family members. “As early as sixth grade, I had won countywide contests,” Green recalls, and enjoyed “tremendous encouragement from Grandma, Mother and every elder relative.” Even as a child, he perceived an artistic connection among the land, the labor and the lifestyle that surrounded him. “My art is all drawing, arranging, improving on things. I just don’t know any other way of living, not only in art but in food, culture, dance, design, clothing—even plowing the fields or raking the yard—there’s an arts component attached to it,” Green said.

In his work, Green conveys the simplicity, dignity and beauty of the individual human engaged in life’s work, particularly as it relates to the Gullah culture. The Gullah region extends from Wilmington, N.C., to Jacksonville, Fla., and refers to the lifestyle that evolved among communities of African Americans who had been brought to the region from Sierre Leone, Africa, to work in the rice fields. The culture involves unique aspects of language, food, arts and rituals, and Green represents it in his work through key elements such as sweetgrass, marsh and water landscapes, and figures in social communion.

Green’s artistic achievements are matched only by his passion for promoting other artists. Even as his career was just taking off after earning a degree from the School of the Art Institute of Chicago in 1982, Green recognized the importance of becoming involved in his local artistic community. “In order to be remembered and strong as an artist, you have to get out there and be part of the community, be pro-arts education. I started collecting immediately after I left school and used monies from the sales of my work to collect works of other artists,” he says. Most of the artists he collects are African American, and many are currently featured on his website. At the time, Green said, “There were few if any artists on the walls of cultural centers and galleries of African American expression and culture, and I felt it was my total obligation to immerse myself as a painter in trying to close that gap.”

Green’s artistic career continued to evolve when he moved to Florida. Based out of a studio in Naples for nearly 25 years, his name and his work spread in popularity throughout the country; during that span, he held three solo exhibitions at the Franklin G. Burroughs-Simeon B. Chapin Art Museum. The first, in 2003, was titled Southern Images of Faith, Family and Friends; the second, in 2008, included both his own work and selected works from his personal collection. In 2009, the museum held an exhibit based solely on one of his works, titled Seeking.

Through his exhibits, Green has cultivated a close relationship with the Myrtle Beach Art Museum. Lori Seckinger, education and program coordinator, explains, “Since our museum is in South Carolina, we try to connect with our culture, the Gullah culture, and he documented what he saw through his painting. He’s working from his memories of growing up in the Gullah community. He’s one of the only artists who documented it through visual art, so it’s important for us to have it because of our location and our culture.” Pat Goodwin, director of the museum, values the power of Green’s work, as well as the level of prestige it carries. “There is just a magic about his work, about him,” explains Goodwin. “We call Jonathan our rock star.” Following Green’s 2008 exhibit, a private collector donated 21 of Green’s works to the museum as a permanent exhibit.  The Barbara Burgess-John Dinkelspiel Collection of Southern Art, acquired in 2009, is a rightful representation of Green’s deep and enduring roots in the Lowcountry. Goodwin remarks, “We are really, really blessed as a small museum to have these multiple exhibits, this fabulous collection and such a special relationship with this artist.”

Green returned to his Lowcountry origins about two years ago, with a move from Naples to Daniel Island. With this move, Green embarked on a new chapter of his campaign to educate and raise awareness of African American artistic and historical contributions. The Rice Project grew out of Green’s recognition that African Americans essentially created the 250-year economic rice industry. “They were contractors, workers, managers of the rice fields,” Green explains. “They created this unbelievable beauty, this landscape that’s associated with the South. They made the very architecture that we value, but few people make these connections.” Thus, Green developed the Rice Project as “an attempt to correct history as we know it, and also a campaign to help with the self-esteem of young African American and Euro American children so they have a better and more truthful understanding of history and who were the major players in that history.”

Green’s commitment to artistic and community involvement is as much a part of his style as the vivid hues that grace his canvases. He feels fortunate to have a chance to experience once more the essence of his upbringing. “I want to be a part of the beautiful landscape of South Carolina so I can be closer to what I produce as an artist. It feels natural and real here.” For South Carolinians, it’s nice to have him home again.