June 2015
Written By:
Paul Grimshaw
Get as much (or as little) exercise as you want with Pedego pedal-assist bikes 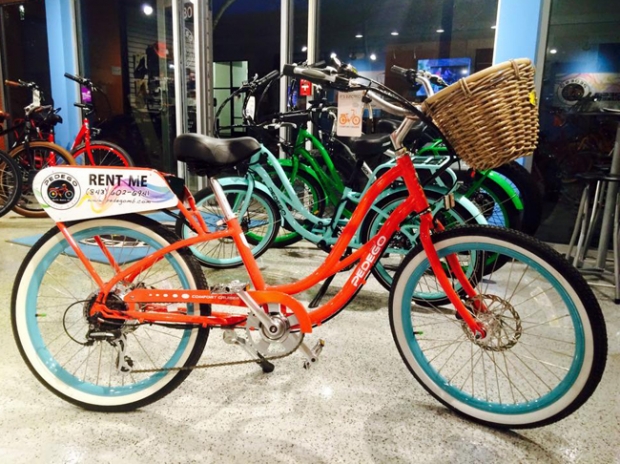 Grand Strand residents and visitors have a new way to get up and go, thanks to the arrival of high-end, pedal-assist electric bikes called Pedego. A new Pedego dealership, the only one in the Carolinas, has opened in The Market Common, one of the most bike- and commuter-friendly neighborhoods in the region.

At first glance, the Pedego electric bike hybrids look like most other beach cruisers. Balloon tires, standard handle bars and a wide, shock-mounted saddle seat attached to a sturdy aluminum alloy frame that comes in a rainbow of bright colors. What you might not see right away is the heart, soul and brain of the Pedego—a large battery pack with a concealed modular processor and small motor that powers what is a surprisingly zippy and hardy electric bike.

Light years ahead of the first generation of electric bikes, the Pedego has the option of pedal-assist and several gears, like a typical 5- to 7-speed bike. Pedal as much or as little as you like. Don’t want to pedal at all? No problem, as the 500-watt electric motor zips you down the road, the beach, the boardwalk or even a forest trail at up to 18 mph. On a full charge, these powerful batteries and motors can last up to 50 miles. The life expectancy of the replaceable lithium-ion battery is up to 5 years and thousands of recharges, translating to 20,000 miles.

Stylish and easy to use, even for young teens and seniors, these bikes are taking over urban centers around the globe for both commuters and recreational enthusiasts. Most Pedego bikes are sold in pairs as couples have found a new way to enjoy time with one another in a shared activity. Here along the Grand Strand, Pedego will deliver a rental bike and offer discounted extended rental packages for as inexpensive as $50 per day. You can also rent from the store at The Market Common. The typical rental is $20 per hour.

“I first bought one when my family lived in London,” said Pedego dealer Aaron Maynard. Toward the end of his career, the now-retired U.S. Air Force Colonel worked for the U.S. Embassy in London. The city is widely known as a traffic-snarled commuter’s nightmare. “I researched online, bought a Pedego sight unseen, and loved it so much we bought one for my wife,” said Maynard. “I used it to commute to work almost every day. When it came time to retire, we contacted Pedego and looked around for the just the right place to open a dealership. When we first saw The Market Common, there was no turning back. We chose it over Charleston.”

The Pedego is not cheap, starting at around $2,295. It is legally classified a bicycle, not a moped or motorcycle, so it can go anywhere a bike can. One test drive around The Market Common and you’ll see why the fast-growing electric bike market might just be perfectly suited for a spin around the Grand Strand.