Georgetown County’s Sandy Island is steeped in history and heritage 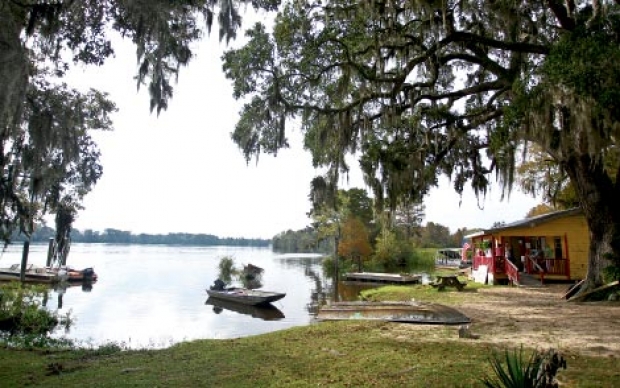 Sandy Island Road, the only way to the Sandy Island Boat Ramp, is a two-lane rural side road surrounded by towering forests of pine. Though just off busy U.S. 17 south of Murrells Inlet, it’s quiet at midday, remote, with sharp twists and turns and warning signs that tell you the road ahead may be bumpy—not unlike life itself for some residents of a river island whose countless generations have been separated from the easier life on the mainland—and for the most part, it’s just the way they like it.

Dating back well before the Civil War, Sandy Island, situated a few miles inland off the coast in Georgetown County, was home to thousands of enslaved Africans and a smaller number of Native Americans who were shackled to the nearby rice fields. There they battled malaria and the unspeakable torture of slavery. They toiled and died on the island to make rice plantation owners of the 1700s and 1800s wealthy. Today, less than 100 individuals call Sandy Island home, and these residents, some ancestors of the West African and Creole Gullah-Geechee culture of the Lowcountry, enjoy a mostly peaceful life filled with faith and community and the spiritual comforts of living in a place in harmony with nature and surrounded by water.

The private folk of the island are said to be leery of wandering tourists in their midst, yet they invite mainlanders to their church, the New Bethel Baptist Church, founded in 1880, and dozens come each Sunday. A few more outsiders discover the history and quiet charm of this place through the only official tour of the Island, Tours de Sandy Island, which was the starting point of a recent journey.

A school boat, the only one in the state of South Carolina, greets children from Sandy Island every morning during the school year. The Prince Washington, as the boat is named, takes around 15 students of varying ages from their island homes to meet an awaiting school bus. The bus takes them on to meet with mainlander children in the Waccamaw school system.

Some say that Waccamaw, the name of a tribe of Lowcountry Native Americans, means “happy river.” Captain Rommy (pronounced row-me) Pyatt knows this happy river well, and seems happy himself.  His broad smile and quick wit serve him well in his role as the island’s only official tour guide.

On a recent autumn day, Pyatt led a group on a two-hour tour that started on the mainland at the Sandy Island Boat Ramp aboard his six-passenger Coast Guard-approved pontoon boat. After two short boat trips we all reconvened at Pyatt’s General Store on the island, clearly visible on the bank of the Waccamaw River.

“My mother owns the store,” said Pyatt, who corralled his guests on the store’s porch to sign in. Inside the store, which was opened in 1986, African heritage gifts, Gullah Sweetgrass baskets, a few necessities and the only public restroom on the island were all a welcomed sight. Soon we were aboard Pyatt’s sturdy, but none-too-fancy, 12-passenger van to start exploring the island. Led by Pyatt, who grew up among the pines, oaks and prehistoric sand hills of the island, the tour showcased his sense of pride in the natural beauty, history and heritage of this rare place.

“[One of the highest points] in Georgetown County is out in those woods,” said Pyatt, pointing down one of dozens of sand roads without names. No road leads directly to that high point, but it’s not hard to find, and hikers do occasionally wander the island in search of it. The island is approximately 12,000 acres, around two to four miles wide by seven miles long, surrounded by the Waccamaw River, the Great Pee Dee River, Thoroughfare Creek and Bull Creek. Some 3,000 acres is private property belonging to the residents, handed down from generation to generation, another small parcel is owned by Brookgreen Gardens, and most of the island is owned by the Nature Conservancy and open to the public for hiking.

On January 28, 2011, the Nature Conservancy took possession of around 9,000 acres and is charged with protecting the island from development in perpetuity. Countless conservationists, preservationists and residents helped save the island from development and to get it designated as a Public Trust Preserve. Not only is Sandy Island home to these proud but private residents, it’s home to a wide variety of wildlife including eagles, osprey, black bears, coyotes, deer, turkeys, bobcats, feral hogs, and its most famous creature, the endangered Red-cockaded Woodpecker.

“You have to get up pretty early in the morning, or go out just before dusk to see them,” said Pyatt. “Once they’re in their roost, they hide most of the day.”  He could have been speaking of the island’s human inhabitants, who weren’t exactly hiding, though we only saw two, both at the general store, and both in Pyatt’s family—his mother, Beulah Pyatt, and his sister, Michele Pyatt. Rommy Pyatt’s 96-year-old grandfather still lives on the island.

At the time we visited, around 11 a.m., all the children were in school, and most everybody else was working. Each day adults share boat rides to and from the island, commuting to their jobs in Murrells Inlet, Georgetown and neighboring communities. There’s not much real commerce on the island, except for the store and Pyatt’s tours, which he books in advance at $25 per person, with a six-person minimum. A bed & breakfast has enjoyed some popularity, primarily for its peaceful surroundings and home-cooked soul food. But come Sunday morning, the island springs to life with residents and visitors alike at the New Bethel Baptist Church.

“We welcome with open arms anybody who wants to worship with us,” said Pyatt with an inviting smile, spreading his arms open wide. “We get a lot of folks who visit. We have boats that pick you up at 10 a.m. and will bring you back after the service.”

“Plan to stay late,” laughed Robin McCall, a regular visitor to the island who was with us that afternoon. She is a tour director and history teacher for Coastal Carolina University’s Lifelong Learning program in Pawleys Island.   “I’ve been [to the church service], and it was wonderful,” she said, “but we didn’t break until after 1 p.m.”  Pyatt laughed and nodded in agreement. “Yes, we’re in no hurry once we get that service started.”

We toured the small, well-kept church starting in the fellowship hall and kitchen, where more traditional soul food is prepared for special occasions.

In the sanctuary Pyatt asked those in the tour group for musical volunteers, and finding none, powered up the church’s organ and struggled through an old “Negro Spiritual,” as he called it. “I’m way out of practice,” he said with a chuckle. Earlier in the tour Pyatt sang a Gullah spiritual he learned at a church in Charleston during a special African Day. The translation of the altogether difficult language to understand, speak and write, was “The Lord Walks With Us.”

The Gullah culture is part of a once large community along the Southeast’s barrier islands created when West African slaves co-mingled with English and French Creole-speaking peoples to develop a new culture, and new language. The few remaining Gullah communities are now only known in South Carolina and Georgia’s coastal regions, and Pyatt laments the fact that the language is dying out even on Sandy Island.

Our tour took us past the best and worst of the Island—beautiful, well-maintained homes, and those that were abandoned or in serious disrepair. We visited the firehouse, with its one operational fire truck, old gravesites, the church, and the community center and library, which once served as the island’s school. Along the sand roads and in the midst of dense forests of oak and pine, we saw a diverse and unique eco-system that has evolved on top of a prehistoric, giant sand dune—a rare hill in this coastal plain. Both electric power and city water are supplied to the island. On the island’s north side, away from the community, a spot popular with summer recreational boaters draws big crowds who enjoy partying, sometimes too enthusiastically. Calmer waters and the tall sand bluffs help draw hundreds of revelers on any given summer afternoon, even more on weekends.

In 2009 tragedy struck on a stormy evening when a boating accident left three Sandy Island residents dead. Close to shore, the boat suddenly filled with water and overturned, the strong currents taking three young lives. “We were working on getting a car ferry,” said Pyatt, “but it’s always something. A ferry would make it a lot easier on folks here.” The community needs an estimated $40,000 to make that dream a reality.

Sandy Island made headlines a decade ago when developers threatened the way of life on the island with a timber-cutting and an alleged residential golf course development, which was thwarted through “divine intervention,” according to Pyatt. Developers offered to build a $2 million bridge to the mainland, which at first sounded great, but the developer’s story of just wanting to cut timber fell apart when an audit of the timber showed its value at $1.5 million. “You don’t build a $2 million bridge just to lose $500,000, do you?” said Pyatt. “They had something else up their sleeves.” The story is told in detail in Saving Sandy Island, a one-hour documentary, produced by South Carolina Education Television.

Pyatt, 37, is finishing his MBA in Charleston, where he lives most of the time. He hopes to move back to the island one day and see a reversal in the steady decline in population over the past decade. “There are 28 [habitable] homes on the island,” said Pyatt. “Our community has dwindled down in the past years. A lot of the younger folks moved off. We had 300 to 400 people living here when I was growing up. Now there’s only a few [younger people] living here, but some of the Baby Boomers are starting to come back.” The island boasts two near centenarians, one Pyatt’s grandfather, and another woman, also 96. “It’s less stressful out here,” said Pyatt. “I think it has a lot to do with their longevity—why do you think I want to move back?”