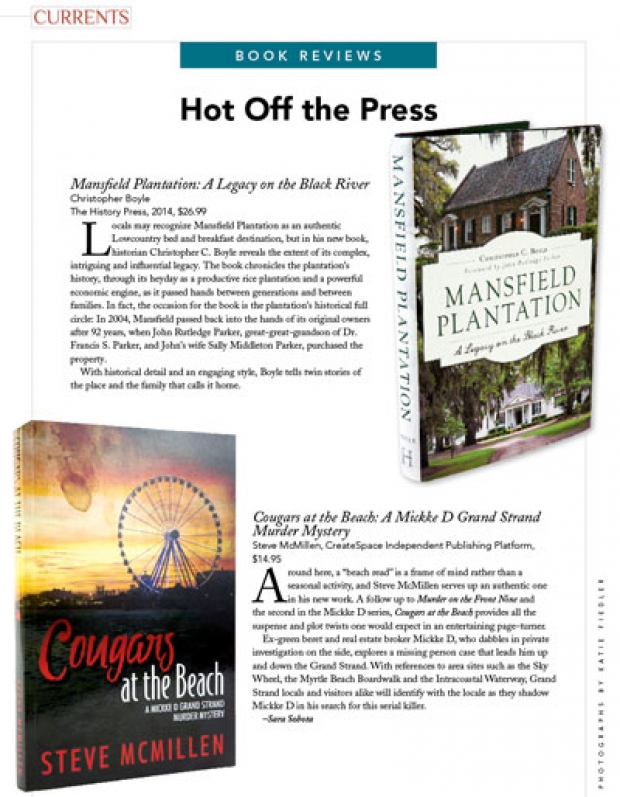 Mansfield Plantation: A Legacy on the Black River

Locals may recognize Mansfield Plantation as an authentic Lowcountry bed and breakfast destination, but in his new book, historian Christopher C. Boyle reveals the extent of its complex, intriguing and influential legacy. The book chronicles the plantation’s history, through its heyday as a productive rice plantation and a powerful economic engine, as it passed hands between generations and between families. In fact, the occasion for the book is the plantation’s historical full circle: In 2004, Mansfield passed back into the hands of its original owners after 92 years, when John Rutledge Parker, great-great-grandson of Dr. Francis S. Parker, and John’s wife Sally Middleton Parker, purchased the property.

With historical detail and an engaging style, Boyle tells twin stories of the place and the family that calls it home.

Around here, a “beach read” is a frame of mind rather than a seasonal activity, and Steve McMillen serves up an authentic one in his new work. A follow up to Murder on the Front Nine and the second in the Mickke D series, Cougars at the Beach provides all the suspense and plot twists one would expect in an entertaining page-turner.

Ex-green beret and real estate broker Mickke D, who dabbles in private investigation on the side, explores a missing person case that leads him up and down the Grand Strand. With references to area sites such as the Sky Wheel, the Myrtle Beach Boardwalk and the Intracoastal Waterway, Grand Strand locals and visitors alike will identify with the locale as they shadow Mickke D in his search for this serial killer.