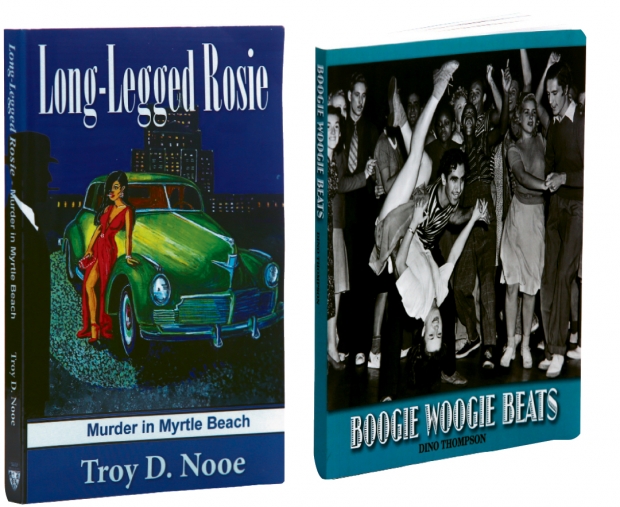 Like the first two books in Troy Nooe’s Frankie McKeller detective series, Long-Legged Rosie: Murder in Myrtle Beach is written in the first-person from house detective Frankie McKeller’s perspective. The follow-up to Ocean Forest and Damn Yankee, published by North Carolina boutique publisher Ingalls Publishing Group, Long-Legged Rosie is a fine stand-alone novel, but fits best after reading the first two books in Nooe’s series.
A finalist in the prestigious Shamus Award from the Private Eye Writers of America, Nooe, a Grand Strand local and longtime bartender, crafts his gumshoe tales much like the popular hardboiled detective pulp fiction of the 1930s and 1940s. He captures what was most fun about the crime yarns from writers like Dashiell Hammett, Raymond Chandler and the Grand Strand’s own Mickey Spillane of Mike Hammer fame.
Part of the appeal is Nooe’s everyman spin on the relatable gumshoe Frankie McKeller, and for locals, the setting—post-World War II Myrtle Beach and neighboring burgs, with the iconic Ocean Forest Hotel as the starlet. The fictional Rosie Carter—along with a U.S. Senator—and a host of other characters major and minor populate Long-Legged Rosie and take the reader on a murder mystery and trip circa Myrtle Beach 1947, best enjoyed from a chair on the beach.

Grand Strand restaurateur and author Dino Thompson has taken on a subject nearly as big as music itself—Southern boogie-woogie and its place in Myrtle Beach. In his new book Boogie Woogie Beats, Thompson contends that the Grand Strand hosted more than its share of the burgeoning beats that would ultimately lead to rock ’n’ roll around the world. He recounts the numerous visitations from nationally known artists who frequented the beach and left their indelible musical ink on visitors and residents. From the African-American supper club Charlie’s Place to Atlantic Beach to the not-always-segregated downtown site of the former Myrtle Beach Pavilion, the town was once jumpin’.
No one speaks more fondly and proudly of his hometown than author Thompson. He is the author of the autobiographical Greek Boy: Growing Up Southern, and is co-owner of the Flamingo Seafood Grill in Myrtle Beach.
Covering race relations during the Jim Crow years and little-known trivia about music and artists from the 1940s–1960s, Thompson speaks directly to the reader, memoir-style, and weaves in and out of eras and locations from Myrtle Beach to Chicago to New York City. Loaded with black-and-white and color pictures, unfortunately none of which are credited or captioned, the book is dream-like and addictive, creating a yearning for more, which Thompson delivers with the turn of each page.