Hooray for the Home Team! 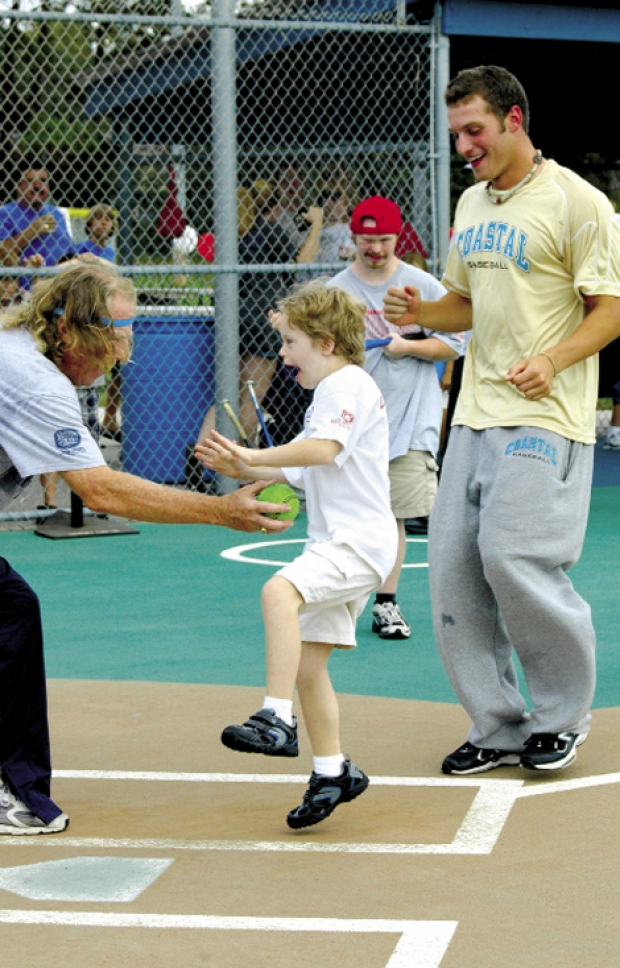 Opportunities for most kids to play baseball are everywhere: school, parks & recreation, Little League, even the church softball league. If they’re willing, there’s usually a game somewhere. But for thousands along the Grand Strand with physical and mental disabilities there had been little opportunity to experience the joy, camaraderie and excitement of playing ball until the Grand Strand Miracle League formed 11 years ago.

“We built the second Miracle League field in the country,” beamed Tory Mackey, who has been the Executive Director of the GSML for seven years. The national organization now lends its name and structure to some 250 Miracle Leagues across the U.S. and in Puerto Rico, Canada and Australia, but each is an autonomous non-profit group charged with funding itself. “Every dollar raised here, stays here,” said Mackey.

“We are a baseball league for mentally and physically handicapped children,” she said. “We built a field 10 years ago behind Pepper Geddings Recreation Center. It has a rubberized surface for wheelchairs and walkers. Our program is all-inclusive, non-competitive. Every child that comes up to bat is going to get a hit, is going to get on base, and get around the bases to home plate. The atmosphere is high-energy, it’s really fun, and this is really the only opportunity for kids with disabilities in our area to be part of a team sport, to have a team, a uniform and all that goes with it.”The league is open to all ages. “We have participants from 3 years old up to 53 years old, but we organize our teams so they can play in their own age group,” said Mackey.

While the program is geared toward fun and family, some players have that competitive edge, and GSML has found a place for them as well. “We have a team that competes in the Special Olympics. Some of the kids have great ability, and can play, so we [began taking a group] to the Special Olympics three years ago. We want to be able to offer this for the kids who can and want to progress, but for the most part we’re there just to have fun and make friends.  We’ve become a very close-knit family. The parents are dealing with the same [challenges] and this has become a very encouraging environment for whole families.”

For several years Ben & Jerry’s ice cream shops have sponsored a Free Cone Day nationwide, this year on April 3. The event, which offers free ice cream all day long, has evolved into a major fundraiser for the GSML and has helped fund a new program. “We have just launched a Miracle League Soccer Program after a successful pilot program last fall—it’s been awesome for the kids,” said Mackey.

GSML will also build a fully handicapped-accessible playground at the Myrtle Beach field. “Our vision has gone from baseball, which I believe will always be at the center of our programs, to creating a recreation center.”

Miracle Leaguers with major league spirit are now fully immersed in America’s national pastime—just as it should be. For more information and to see the schedule of games, go to www.grandstrandmiracleleague.com.