A landmark home in Conway gets a new lease on life 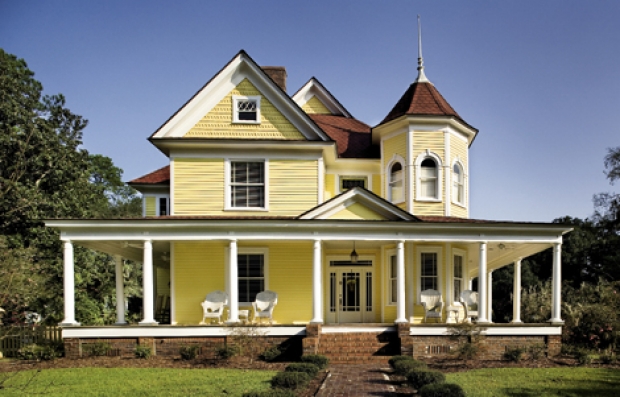 And like many newlyweds growing a family, the couple went on a dream home hunt, with Ginger resolute on “something unique and close to downtown Conway.”

But what sets this couple apart from most of their peers is that after a concerted search and much apprehension on Ginger’s part, the Jordans passed on newer construction and put in an offer on the former Arthur M. Burroughs home at Conway’s Historical Marker #17. The Lakeside Drive address, overlooking Kingston Lake, was a perfect fit. However, the sprawling, yellow Queen Anne built in 1903 redefines “unique”—taking on 107 years of wear and tear and retrofitting in modern amenities is a task requiring the true grit of a pioneer.

Even though David is the CFO of Chancel Builders Inc. and no stranger to the rigors of home construction and renovation, the “yellow lady” was to be a high-maintenance challenge from the time they broke ground in July 2010.

As Ginger pointed out, “There’s three bathrooms and two half-baths in this house but not one of them worked … the only working toilet was out in the garage.”

David started from the ground up, replacing all 40 of the original brick piers to shore up the whole structure and straighten the floors, which took three months to accomplish. “In this great room, I could put a tennis ball on the floor and it would roll downwards to the back wall, bounce off of it and end up in another corner,” David chuckles. “At some points the floors were six inches off of level.”

A first-glance inspection of the electrical system came back as adequate, but before long, that hope was dashed and another $15,000 and six weeks would be added on to rewire the entire house to current code standards.

And then there was this obvious question, especially for a home of its era: Where, oh where, did the baseboards go?

David’s first clue may have come with the inability of modern nail guns to penetrate much of the wall surface. The century-old hardwood 2 X 4’s were thought to be the nail-bending culprit, but as the renovation moved along, David also found that the original walls of wood slats troweled with Latham plaster had at some time been covered over with metal bars and new plaster, and then around 1968, homeowners Franklin and Geraldine Burroughs decided to drywall the entire home—right over the thick, carved original baseboards. Luckily, a small utility closet was left untouched and its baseboards became the pattern for the new installation.

Carpet covered the floors even in the kitchen and bathrooms and unfortunately the original hardwoods had been stripped away. And, any work to be done on the original wavy-glass windows would be a custom job as every window in the home was a different size, handmade back in the day.

But the “yellow lady” would also bestow gifts to its new owners like beautiful, intact light sconces, an attic full of tongue and groove cypress, six working fireplaces and a one-of-a-kind sleeping porch encased in banks of tall latched windows dating back to 1927.

Ginger found herself in a decorating conundrum, defining her and David’s style as traditional but wanting to infuse a sense of youth and style. After all of this work, she wanted her family’s personality to now reign supreme.

“I had just been diagnosed with breast cancer when David called,” Lynn explained. “And I was thinking how can I take on new work while going through treatment? What if I can’t keep up with it? But David insisted he wanted me to help them with this house and that he would keep me so busy with it that treatment would be a blur. David and Ginger gave me this chance at a time when most people wouldn’t want to gamble on me.”

“I was so excited to be involved with this landmark home in my hometown! I call the design traditional with a twist—not too trendy, but spirited and fun.”

Throughout the home, antiques mingle with traditional furnishings. Colors are a fresh take on old favorites. And to shake everything up, Lynn and Ginger threw in some bold and sassy wallpaper in unexpected places like a downstairs powder room.

It took a year’s worth of blood, sweat and tears, but the Jordan family moved into their historic home the summer of 2011—a 3,800-square-foot fine Victorian with another 1,000 square feet of porches, plus a finished attic space, four bedrooms, a modernized kitchen and butler’s pantry, great room, formal dining and living rooms, office and sewing room, a receiving parlor and sleeping porch. Best of all, all five bathrooms are now in working order, including a centurion claw foot tub with the original fixtures.

Renovations and updates ended up costing as much or more than the price of the home. So, it begs the question: Was it worth it?

“Absolutely,” says David. “I grew up down the road so we feel like we’ve enhanced the neighborhood, preserved a piece of history, and hey, the house is very cool … there’s no other like it in town!”