Holley and Mike connected as co-workers to align in life 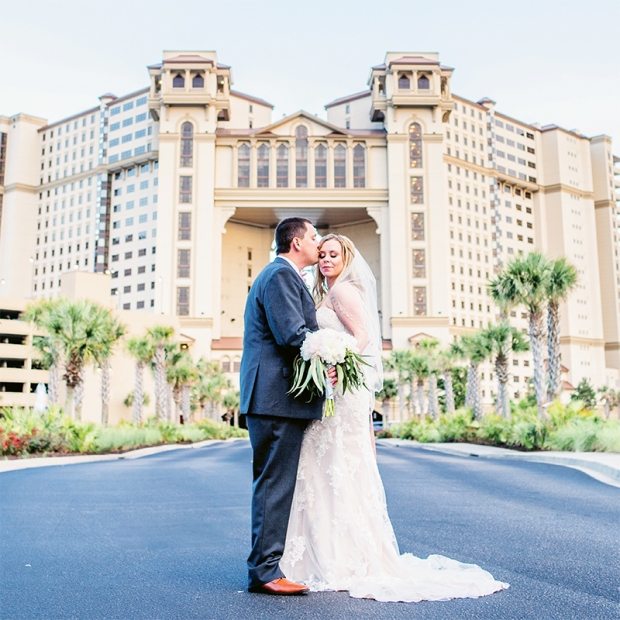 When you work as a wedding specialist for a living, like Holley does, your own wedding carries a certain fairytale precedence.

And when you meet your future groom as a co-worker on said job, it’s destined to live up to just that.

Holley and Mike met while working together at the DoubleTree Resort in Myrtle Beach, he as a controller.

“We worked in different departments, but occasionally we would have to work together, like on billing or something and we both would work late in the office,” says Holley. “And we kinda just clicked.”

One night after work, the two Coastal Carolina University (CCU) alumni realized they also had a love for music in common, as Mike carried out his saxophone case (he had played in the Pawleys Island Community Band) and she shared that she played the flute through high school.

That led into a first date watching the South Carolina versus Tennessee game at a local restaurant for the two Gamecock fans, which became the official kickoff to tying the knot two years later.

“The Gamecocks didn’t win that day, but it was a win for the both of us,” says Holley. “I think we both knew instantly that this was going to be a special relationship. Everything was so easy and just felt right. He just really had a gentle nature about him.”

It’s a trait that was also integral, when it came time for Holley to introduce Mike to her son, Hayes.

“As a single parent, you’re always a little apprehensive about introducing anyone that you’re dating to your child, but it was just all very natural and very easy,” she says.

Also natural was the next step in their relationship: getting engaged on their two-year anniversary, which they celebrated at 21 Main Prime Steakhouse, where Holley now works as a wedding specialist with 21 Main Events. After champagne toasts and a lavish meal, the couple exchanged gifts in the courtyard post-sunset.

“Mike created a photo book of us throughout our two years together; it was really sweet,” says Holley. “On the last page of the book he had written, ‘The last two years of my life have been the best of my life and I look forward to spending the rest of my life with you. Will you marry me?’”

After she said, “Yes,” of course, Mike told her about the mishaps behind the magic, including a flower arrangement he had sent to her that never arrived and the two photo books he had to send back because of the same typo, before he just ended up writing the note on paper himself.

“We laugh about it now,” she says.

When planning her romantic fairytale wedding, Holley wove her love of musicals and Disney movies into her vision, with soft pastel pinks and blues making a pretty appearance throughout the courtyard at 21 Main Events at North Beach, the site of their June 9, 2018, big day. Pre-ceremony, a local harpist set the romantic mood, along with passed trays of gold-rimmed glasses of pink champagne.

Holley walked down the aisle in a gorgeous sweetheart neckline gown cinched with a blush belt to the tune of a customized wedding march played by a trumpeter and harpist that paid homage to The Sound of Music, Holley’s favorite musical, and the CCU fight song. Mike waited for his bride in front of an enchanting arch bursting with greenery and eucalyptus and hung with clear glass orbs filled with tiny white fairy lights. Not only was the ceremony sealed with that traditional kiss, but also with the bang of a flower cannon to get that perfect shot for the wedding album.

While the newlyweds had photos taken, guests enjoyed an extended cocktail hour in the courtyard, complete with passed hors d’oeuvres, cocktail stations shaking up the Wallaces’ special raspberry kiss martinis and white bellinis blended with a variety of fruit purees, and a Carolina country station serving Southern comforts like shrimp and grits, pulled pork and 21 Main Prime’s award-winning mac and cheese. To represent Mike’s New York family roots, there was also a gourmet pasta station featuring a few of his favorite things: chicken parmesan with rigatoni, sweet and spicy Italian sausage and meatballs.

But that was only the beginning. The celebration continued with a formal dinner reception held indoors in the ballroom, where guests were treated to a magical setting of ethereal centerpieces sprouting high above rosette linen-covered tables and more glass orbs dangling from the ceiling.

The cherry on top was the dessert station, an indulgent spread of bananas foster, ice cream, profiteroles, cannolis, chocolate-covered strawberries and handmade Brazilian chocolates (a surprise from the wedding photographer).

“I think the most special part of our day was just being with all of our friends and family,” says Holley. “My family really took Michael in and he’s kind of an answer to their prayers.”

More reflections from Holley include some advice for future brides: “Trust your vendors,” she says. “You’re hiring professionals. I basically shared a Pinterest page with them and I knew they understood my vision. If I had to agonize over every little thing that my event designer was going to do, I would’ve driven myself crazy. So it really allowed me to focus on the more important [things], like spending the time with my family. ... Oh, and if you’re thinking about hiring a videographer, do it,” she adds. “I didn’t think I would watch our wedding video as much as I have, and I’m so glad I did.”

Today, the couple is living happily ever after in Myrtle Beach, where Mike now works at CCU as assistant controller.