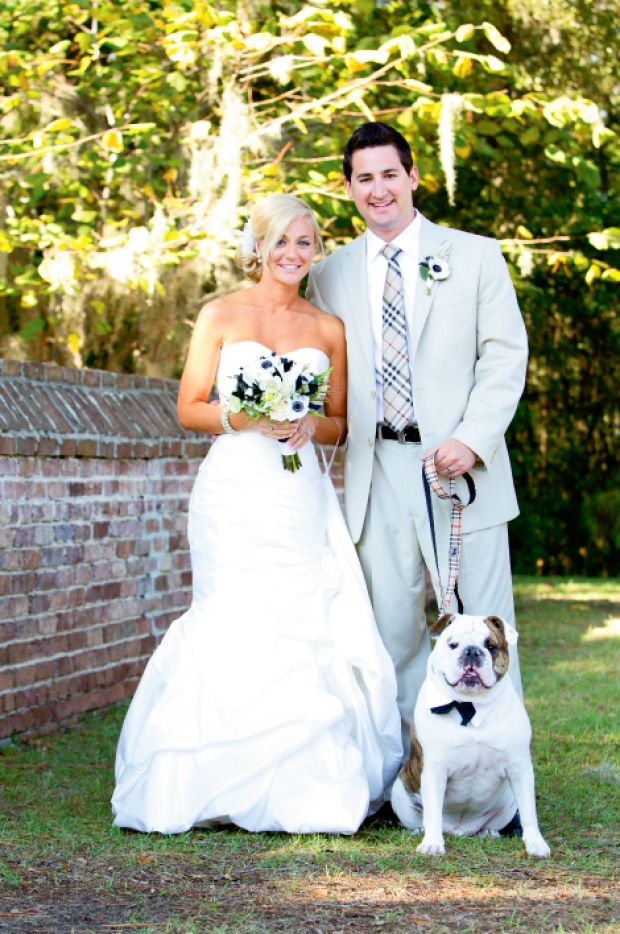 On New Year’s Eve 2007 at a bar in Sea Isle, New Jersey, Samantha Sipio really wanted a drink. Little did she know that as she was waving her $20 in an attempt to get the bartender’s attention, the DJ working the party was telling his friend, “If I don’t go over there now, I’ll never get a chance to talk to this girl.”

Scott Riese eventually made his way over to buy Samantha a drink, and she returned the favor. They talked between his sets and she added her number to his BlackBerry. Scott didn’t know that earlier Samantha and her friend Kelly had been chatting about how one of them was going to be dating him soon. His wardrobe was appealing. “We loved that he was wearing a sweater vest…most guys just can’t pull it off,” Samantha says. “So it was the sweater vest that got me!”

Their first date was two weeks later. After the second date, Samantha knew that Scott could be the one. After six months they made their relationship official and spent time going from New Jersey to Pennsylvania to visit each other. They both loved roadtrips, watching their favorite sports teams and trying out new restaurants.

When the pair both got laid off from corporate jobs, they decided it was time for a change. Samantha’s parents lived in Murrells Inlet, so the couple decided to come give the area a try. After arriving, their love of boating and the beach made them realize they had made the right choice.

For Christmas 2010, Scott planned a dual family trip to Disney World. Before going out for Christmas Eve dinner, Scott asked Samantha to sit down and close her eyes. He got down on one knee and asked her to marry him. “It was magical,” says Samantha.

Though the family knew Scott was going to propose, they had no idea it would be on the trip. “Everyone was crying tears of joy,” says Samantha. It was a great surprise that their families got to be a part of the proposal. They all celebrated at dinner with champagne and amazing desserts.

Nine months later, the wedding took place on October 1, 2011, at the Reserve Harbor Yacht Club in Pawleys Island. A venue the couple instantly fell in love with, the Club boasts hundred-year-old oak trees and million-dollar yachts, providing a nautical feel without being a typical beach wedding. And the event was anything but typical.

The ceremony took place on a gorgeous day on a hill shaded by beautiful oaks, a setting filled with Southern charm. The color palette was black and white with a Burberry theme. “Scott and I wanted our wedding to be simple yet elegant and tons of fun,” says Samantha. They incorporated their own unique style to reflect their personalities. “That’s where the Burberry came in. It has a classy, sophisticated look, which was exactly what I intended the wedding to express,” Samantha says. This simple touch ran throughout, with the groom and best man wearing Burberry check ties and Burberry ribbon adorning several of the flower and candle arrangements. One of the most special guests even donned a Burberry collar and leash.

Drama, the couple’s beloved English bulldog, served as ring bearer. In his Burberry and his black and white bowtie, he walked down the aisle with the bride’s brother and delivered the rings. “It wouldn’t have been the same without him there. He looks so cute in the pictures!” says Samantha.

Another personal touch was honoring those who could not be there. Samantha and Scott both lost special family members in the past year, and they collected photos of these important people. “We wanted their presence to be acknowledged on the most special day of our lives,” explains Samantha. They both wrote prayers for these loved ones as a thank you for impacting their lives. The guests enjoyed the photo collection, which the couple plan to forever display at home.

Before looking for her dress, Samantha perused countless magazines. After showing Jessica Morris at The Little White Dress what she envisioned, the first dress Jessica pulled was the winner. “She was amazing and picked out the exact dress that I had in my mind from the beginning,” says Samantha. After trying on a few others to confirm, the first choice, with its sweetheart neckline and mermaid bodice with pickups at the bottom and flowers and feathers scattered throughout, was the one. Samantha also chose a Sara Gabriel headpiece with a flower, feather and small rhinestone.

Scott wore a sand-colored suit with his Burberry tie. The couple wanted to keep their bridal party very small and intimate. Kelly Rega, the maid of honor, wore a short black bubble dress and Thomas Quaile, the best man, kept with the theme by wearing a Burberry tie under his black suit.

Samantha and Scott wanted their 100 guests to experience some of the best food the South has to offer. Appetizers included a jumbo shrimp luge and bacon-wrapped scallops.

The buffet featured a 150-pound pig from Hog Heaven. Other offerings included chicken and vegetable skewers fresh off the grill and a pasta station with a choice of meats and sauces. The chocolate chip cake was was small and simple.The dessert spotlight was on a variety of pastries from the Trestle Bakery, since Scott is a fan.

The reception featured a favorite drink from the bar where the couple met. The Ocean Drive Lemonade is a deliciously simple (and potent) beverage made with lemonade and vodka. But the drinks that really wowed were at the coffee bar. Samantha, a Starbucks-a-holic, thought it would be great to have the franchise at the wedding. Two baristas made specialty drinks poolside, which awed guests.

Samantha says friends and family are still buzzing about the amazing reception. A DJ from Philadelphia was flown in and guests partied the night away. They continued the fun at Crocodile Rocks at Broadway at the Beach post-reception.

Samantha and Scott’s big day was everything they had hoped for. The wedding was simple, elegant and classy, but, most importantly, fun. Though Samantha doesn’t think there is anything wrong with tradition, the Sipio-Reese wedding was anything but typical. The pair found ways to add their own style and couldn’t be happier with the result. “It was the best party I had ever been to,” says Samantha. “We were really lucky to have such an awesome group of people to help us celebrate.”