Have Horse, Will Travel

How this Myrtle Beach native took her dreams by the reins 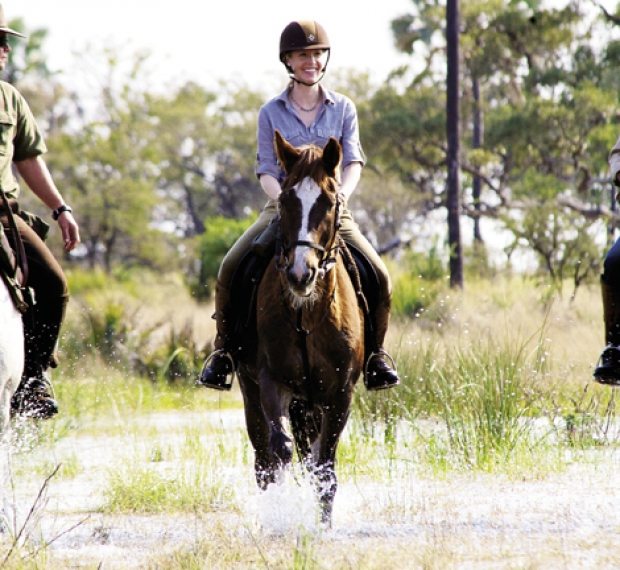 Darley Newman is a nouveau pioneer traveling the world by equine.

The fearless Myrtle Beach native and PBS TV star is charting courses from continent to continent, with a GPS in one hand and a leather bridle in the other. An award-winning cameraman on horseback closely follows her trail as Newman logs her journeys from the saddle for those watching along in the living room.

To Newman, host/producer/writer/creator of the Emmy-winning show Equitrekking, it’s a career route even she finds hard to wrap her head around. “I definitely always wanted to do something in a creative space, but I wouldn’t have guessed how it would have turned out,” she shares over the phone from her office in Maryland. “One thing leaps to another and you never know what’s coming …”

Growing up in Myrtle Beach a couple of blocks from the ocean, Newman leapt into outdoor activities like tennis, surfing and horseback riding at age 7 while at camp in North Carolina. She was also involved with Trinity Lutheran Church and community theatre, attending Myrtle Beach Middle School through eighth grade until her mom decided to send her to boarding school in Virginia.  “I loved growing up here when it was a small town,” says Darley. “When I visited in the spring, I actually got lost going to the outlet mall.”

Newman, 33, was back in her hometown of Myrtle Beach in March to be honored at Coastal Carolina University’s Women’s Leadership Conference at the Myrtle Beach Convention Center. It was here that professional women in the audience heard her inspiring story that told the tale of “small town girl with talent, passion, diehard determination and dreams finds success in the big world.” It’s a popular story theme, but Newman is proof that it really does exist.

In between boarding school and college at George Washington University, where she earned a bachelor’s degree in communications, Newman worked summers as a hostess at Pier 14 in Myrtle Beach. She was bitten by the travel bug after studying abroad in Spain and Italy, but she really had a trifecta of passions—travel, creativity and horses. These loves first converged during a horseback riding vacation with her mom, who passed away several years ago, at Biltmore Estate.

From this eye opener, successive stepping stones began bobbing in the proverbial waters for her training, which would culminate in a giant leap toward Equitrekking. Newman worked as a contract camera operator with Time Warner in Myrtle Beach, then moved to New York City to work for CBS on the 48 Hours series. She also held positions with the WB, The Talk Radio News Service and PBS.

Newman credits Susan Zirinsky of 48 Hours as the mentor who really believed in her when she pitched a “crazy” idea of a horseback riding travel series to PBS—a crazy-brilliant idea that didn’t live anywhere on TV at the time. Equitrekking was launched in 2007.

“I know and love that horses have some sort of connection with people,” says Newman. “I love being around horses, the smell, the feel … it gives me a rush, like one of those natural highs.”

And that powerful insight has galloped Newman quickly to the top of the TV travel series category, proven by Equitrekking’s four consecutive years of Daytime Emmy nominations—five nominations total (which include nods to the series, writing, host and producer categories) and two wins for Outstanding Single Camera Photography in 2009 and 2012 for the phenomenal work of Greg Barna, director of photography.

“It’s a challenge working with anybody in the unique set-up we have, but we have a great team—mainly because we’re so different and, at the same time, complement each other.”

In fact, Newman’s husband, Chip Ward, serves as her trusty traveling companion and executive producer for the show, which, for most couples, could pose an added challenge. “I’m more of the creative part of the entity, while he’s more on the technical and business side,” says Newman. “If our roles were the same, it would be a lot different.”

Challenges the team of three do face and conquer on episodes filmed around the world are traversing through spots that only horses can trot, like the crater of a volcano in Maui, rough terrain along the United States-Mexico border, the Wadi Rum Desert in Jordan and the rainforests in Belize. The team even recently filmed—and survived—an elephant charge in Botswana.

“Another challenge that’s ever-present is the timing of everything, meaning for us, it’s the normal traveler combined with filming,” says Newman. “GPS is there with us, but we get lost. And sometimes that’s OK. In Ireland, for instance, GPS led us to a castle that was virtually unexplored.

“Then there’s traveling in high elevations and camping in remote areas without electricity,” she adds. “But that’s what we like. … We try to go to where the locals tell us is cool, that aren’t the normal places to visit as tourists. And that could be a mosque at one place, a church in ruins outside a village … National, spiritual experiences.”

Newman’s choice of transportation during these experiences has included everything from championship cutting horses in Colorado to award-winning Andalusians in Spain, acquired through a network of connections she has with riding guides, tourism boards, equestrian clubs and more. “The rare breeds are just awesome,” she says. “It’s amazing to see how different horses are everywhere—how they’re shaped by the people in their environment.”

And it’s the people that Newman’s met along the way that are her personal highlights. “That’s what makes what I do so special,” she says. “I love the people we met in Cappadocia, Turkey, where not many Americans travel. Some people are scared off by Turkey, but I was surprised and overwhelmed by how friendly and welcoming they were.

“That’s the thing,” she adds. “People are really similar everywhere in the world … We’re all human and all facing challenges of some sort.”
And we all have dreams, which Newman, it seems, is living. Equitrekking is broadcast on PBS stations across the United States, Create TV, travel segments on the Starz Network’s Encore Westerns Channel and in more than 65 countries, including Japan, France, Italy, Russia and Turkey.

Newman is also the brainchild of equitrekkingtravel.com, a blogger, a published author (Equitrekking: Travel Adventures on Horseback, which received the Merit Award for Best Travel Book 2008 from the North American Travel Journalist Association), and a regular writer of True West and Practical Horseman magazines.

“I’m young and just love to travel,” says Newman. “And it’s just fun making something interesting for our audience to relate to.”