Recreational clam harvesting with an old salt in Murrells Inlet 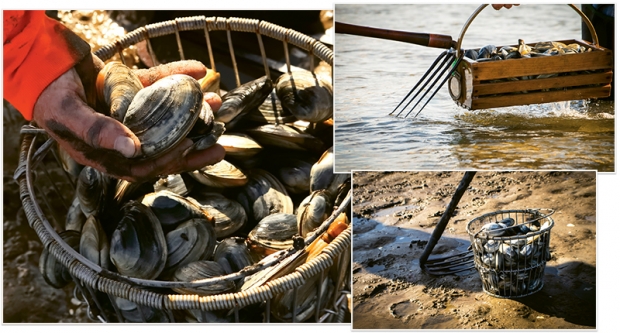 On the SC DNR “Sea Science” webpage, the entry for clams reads, “In South Carolina, the hard clam, Mercenaria mercenaria, may be one of our most overlooked shellfish delicacies.”

Certainly, the word “delicacy” is correct—few things rival a briny, steamed-open clam. But so too is “overlooked,” for unlike oysters—which stick out their great gray blades in the open, as if in defiance—clams are underground, in the mud, down below, overlooked.

But there is something universal about clams, something beyond the regional. Something primal and necessary. “Eating of shellfish linked to survival of early man,” a headline reads from The New York Times. “Seafood gave us the edge on the Neanderthals,” reads another from the New Scientist.

The thing is, almost everything in the sea likes clams. The reason conch shells are tapered and pointed? To drill into clams. Starfish pry them open with their arms. Shorebirds are known to drop clams on boulders to get to the meat.

I perused my cookbooks. Indeed, there isn’t a single clam recipe listed in The Southerner’s Cookbook. Although Piggly Wiggly’s Favorite Lowcountry Recipes has several recipes for oysters, it has none for clams. What about A Skillet Full of Traditional Southern Lodge Cast Iron Recipes and Memories? Nada. Smothered Southern Foods has a recipe for “Creamed Clams,” but dutifully notes in the recipe’s preface, “Fresh clams are still a little challenging to buy in this country unless you live along the East or West Coast.”

Well, by God, I live on the East Coast. And one day, I hankered for clams. I’d seen them shining in the seafood markets, expensively, but I just wanted to harvest them myself.

The tide was falling, close to dead low, and so my friend Captain Jolly Roger and I gathered our clam rakes, our five-gallon buckets, our muck boots, our hand towels. We drank a few beers. You can never be too bedazzled, he said, when raking clams.

We headed for the Murrells Inlet Shell Landing and the public shellfish grounds there. We walked out past the live oak on the point, then down to where the pluff mud is brown and smooth, as if painted over. Little rivulets trickled through the crushed shells in full winter sunlight. A great blue heron with a perfect yellow eye perched on a barnacle-encrusted piling, watching us either enviously or suspiciously.

The bigger clams—the cherrystones and the chowders—I’ve treaded for, but only when the water’s warmer and I can graze my feet on the muddy floor and feel for their fist-sized hardness. This day, though, we raked the clam-bank for littlenecks and topnecks, which are the smallest and tastiest clams. When clams ascend in size, they descend in value. Like veal, the young meat is often considered the best, the most tender.

The real key to clam-raking is to find a keyhole. These little holes in the ground are—sure enough—keyhole-shaped, and they make the mud look like it is breathing. You hit the clam rake on top of the surface there, scratching, and you know when you’re not raking up oyster shards and broken shells. You can feel a clam. A clam offers a moment of resistance, and is more substantial, rounder, fuller in the rake.

When you get your first clam, you begin working along a horizontal line of them that we call a seam. You make a little pool with which to rinse them off before you drop them clunking in the bucket.

The repetition of motion brings about thought. I thought, “If we weren’t working for ourselves—if, say, we needed the money more than the food, and we sold these at market—then what could we get?”

I did the math. That’s five clams a dollar! It had only been 30 minutes, and I had 30 clams. So, what? Twelve bucks an hour? Damn, I was getting a side job as a clammer!

“But hold on,” he said. We couldn’t just sell them directly at market. No, maybe in another time—maybe back in the day—we could have knocked on the back door of the local seafood market and sold them under the table (wink, wink) right out of the bushel basket, at a hundred dollars a bushel. And that’s a bushel of littlenecks only. No cherrystones or even topnecks.

This was getting to be pretty back-breaking work, but we kept at it. Though, it’s not like back in Long Island, where as a boy Roger worked the tongs on a flat clammer boat called a garvey, alongside Roy White and Frank Bernzott. Rugged fellas they were, all tanned arm muscles and hard-drinking in the evenings at a little clammers’ bar called Codfish Bob’s.

“Now that was tough work, wasn’t it?” I asked him.

“Listen, son,” he said. “All commercial fishing is tough work. Just standing on a boat all day out at sea is tough work. It’s not like typing up words.”

With our half-bushel each, we sloughed off our muddy boots and drove hungrily back through Murrells Inlet, where every year we gather at the Hot Fish Club for the annual Spring Tide Clean-Up and Chowder Cook-Off. A cookbook that sprang out of the event—A Spring Tide Cookbook—has an entry for “True Inlet Chowder” that lists the ingredients without measurements and then, rather aggressively, instructs:

Now the rest is up to you. Try it and you’ll be sure to be a TRUE chowder maker. This recipe lists all the ingredients for the TRUE inlet chowder (which is red and not white). You must have some cooking skills to be able to prepare this dish. The amounts of the ingredients depend on the amount of the chowder you are going to prepare – Miss Ellie.

These days you might can capitalize a word and make it TRUE. I don’t know. All I know that’s true is that we have a recipe for clam chowder that is as rich and rejuvenating, as chunky and hearty, as anything you’d like after an afternoon of winter clamming.

We went home with our catch and hosed everything off, washing the clams in a bushel basket in the creek. My back was sore, and I was cold. It was time to go into the kitchen and crack open a beer, then a few clams, and to raise up and slurp up both, in praise of our catch.

Where to Rake for Clams

How to Rake for Clams

•A good clam rake need be nothing but tined and sturdy. I like the 4-tined Forged Cultivator, now only $15.97 at the Home Depot.

•A bushel basket is good for washing the clams. A five-gallon bucket will suffice.

•You can take home a half-bushel each, as long as you have your saltwater fishing license. 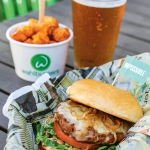 Wahlburgers Reopens at Myrtle Beach's Broadway at the Beach

Wahlburgers reopens at Broadway at the Beach with new corporate structure 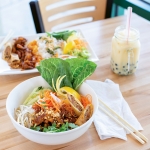 This Asian fare is served with flair 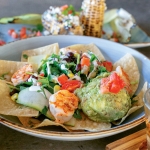