Palmetto Farms churns out some of the state’s best grits 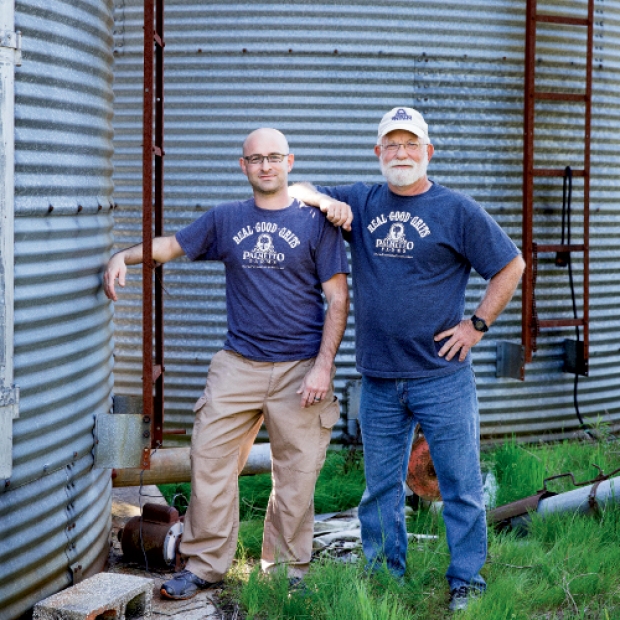 Before they are shipped off to become the Jalapeno Grit Cakes at Rivertown Bistro in Conway, or the Truffled Pecorino Baked Cheese Grits at the Four Seasons in Washington, D.C., or the Stacked Grit Fries at 82 Queen in Charleston, or the breakfast fare that’s boiling on your stovetop at home, Palmetto Farms grits are the little stuff that David Dorman’s dreams are made on.

“When I started out I had zero business,” he says one cool morning while overseeing his gristmill on the family farm nestled between Aynor and Galivants Ferry. “I just started putting grits in the back of my truck and going to talk to people—gourmet shops, specialty shops, touristy kinds of things. And then we started getting into a few grocery stores, and it’s grown significantly every year.”

Dorman at first seems like a classic third-generation miller—white-bearded and soft-spoken and wearing jeans that are occasionally dusted with cornmeal. But it wasn’t always that way.

He reluctantly left a custom sign business in order to open up a retail store with a gristmill as its centerpiece, but when the economy tanked in 2009, he moved everything back to the land where his family had been grinding millstones for more than 80 years.

“The thing of it is: my grandfather always had a mill, and I think some of his family before him, too. Back then, there was a gristmill on every corner. That’s what people lived on. You would grow your corn, you would take it down to the gristmill, they would grind it, and you would get your half, and they would keep their half.”

Dorman’s current gristmill certainly appears a modern machine with its steel housings and its thrumming 5-horsepower engine, but it is surprisingly similar to the gristmills of the early 20th century, three of which he keeps in barn sheds toward the back of his property.

In fact, even the same company, Meadows Mills, of Wilkesboro, N.C., designed and produced both his grandfather’s gristmills and the one he uses today, making for a remarkably unchanged process.

“There’s nothing magic here,” he says while watching corn get fed into the hopper, from which it pours out in a steady stream into the vertical granite grindstones and then gets shot through metal pipes into the separator, where the grits are sifted from the cornmeal and larger pieces he feeds to his chickens. He gets about half cornmeal and half grits—yellow or white, depending on the corn that’s fed into it.

“Yellow grits are kind of a South Carolina thing,” Dorman explains. “But here’s an interesting thing, and I have still never figured it out: most people insist on white grits and yellow cornmeal. It’s kind of weird. Why do you think your grits have to be white but your cornmeal has to be yellow?”

One reason might be that people are accustomed to national brands like Jiffy Cornbread Mix (yellow) and Quaker Instant Grits (white), but this kind of thinking can rile up small gristmill operators.

“Quaker is basically a flavorless filler that tastes like a cardboard box,” says Dorman’s son, Devin, who helps his father run the technical side of the business. “Our grits are on a completely different tier. It’s a much better product. We start with better corn, and in the end it retains the flavor you look for in the first place.”

Part of that taste comes from what gets through the separator and into a bag of stone ground grits: the occasional tip cap—the little black specks that attach the kernel to the cob—and the smaller bits of pericarp—the outer shell of the kernel, or that part you get stuck in your teeth when you eat popcorn.

It’s the stuff that can drive some grits eaters crazy—Dorman’s mother, in fact, would always wash her grits until they were almost as smooth and white as ice cream—but it’s also where all the flavor and nutrition reside. And it’s also the way they’ve been served forever.

Dorman, for his part, sees both distinction and value in keeping things traditional. Even the cloth bags in which he packages his grits are designed, cut and manufactured on site with history in mind.

“Honestly, I think part of our success is our packaging,” he says. “There are other people who have cloth packaging, but ours tends to stand out. Basically what this bag says is that this is old-fashioned, and this is South Carolina.”

But grits as a food staple, despite their iconic associations with Southern culture, go back farther in time—to the Native Americans who would boil corn they called “rockahomine.” When English colonists first tasted these rudimentary grits in the 16th century, they shortened the word to “hominy” and a culinary tradition was born. Nearly 400 years later—after shrimp and grits transformed from a cheap shrimper’s breakfast to an expensive restaurant dish—South Carolina declared grits to be the state’s official food.

And now, as the Buy Local and Eat Local trends continue, orders for Palmetto Farms grits are piling up, and Dorman is enjoying the fact that his business is succeeding on the same property where he first learned to work a gristmill.

“I like the whole historical part of it,” he says, looking around at stacks of cardboard boxes packed with yellow grits, white grits, cheese grits, jalapeno cheese grits, hushpuppy mix, cornbread mix, white cornmeal, yellow cornmeal—all of which he grinds in a room not much bigger than a schoolbus.

“I like the simpler, older lifestyle. Plus, if it ever goes down, I can get something to eat.”