Going For The Green

Grand Strand golf courses are attracting locals with deals and discounts that are wallet friendly. Affordable rates at prime courses keep the local golfer coming back for more. 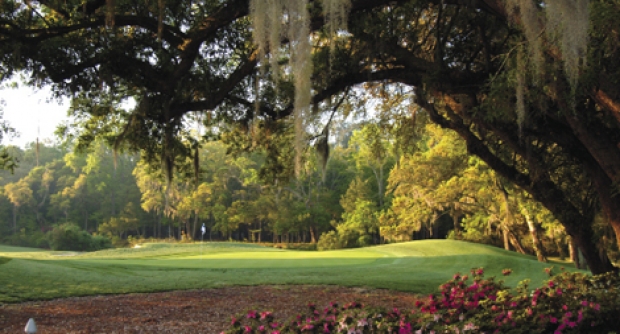 Though the choices are fewer, the opportunities have never been better for Grand Strand golfers. The struggling economy that led to the closure of several golf courses between Wilmington and Georgetown has provided better access and greater value to local players. Fifteen years ago, the area’s top courses were able to fill their tee times with tourists paying top dollar—at least a handful of courses charged more than $100—especially during the peak spring and fall seasons. Locals either had to shell out a C-note or settle for late-afternoon or off-season opportunities at the best courses the “Seaside Capital of Golf” had to offer.Now, even the top courses (the Grand Strand has a few dozen public courses that have been rated at least four stars by Golf Digest’s “Places to Play”) have reduced prices and give locals deals that would have been unfathomable during the boom years of the 1980s and 1990s. Plus, in a type of survival-of-the-fittest, the area’s most popular and highly rated courses remain open. Most courses that closed were the medium-priced, middle-of-the-pack courses that couldn’t compete. Several of the older “resort-style” courses were converted into housing or commercial developments.

The internet has played a big role. Golfnow.com, owned by The Golf Channel, sells a big chunk of online tee times throughout the Grand Strand. Instead of calling several courses for options, golfers can spend just a few minutes online to choose one of 76 courses and a tee time with the help of published prices.

“There may not be as many courses, but it’s much easier to play fantastic golf courses on a regular basis without emptying your wallet,” said Tim Stier, who has worked in the financial industry in Myrtle Beach for more than 20 years. “The change has been dramatic.”

Local players, who often felt overlooked and unappreciated a few years ago, especially during peak golf seasons, have noticed a difference at area clubhouses. Many of the top courses are catering to area residents, realizing that local players can be a key to survival during economic downturns that reduce the number of minivans filled with out-of-town   golfers at the beach for a week of premium golf.

“It used to be really hard for us to get a good price to play some of the top places. You had to know someone,” said Jack Stogner, president of the Golfsters, a group of more than 50 players that have held weekly golf outings throughout the Strand since the 1970s. “We had to go to other places. Now, everybody’s coming to us. They started being really good to the locals.”

Stogner said his group rarely pays more than $35 per player for greens fee and cart rental, even at courses such as Caledonia Golf & Fish Club or True Blue, which for years have been near the top of the local price list. At some courses, they pay as little as $20. He said the rates are steady, regardless of the time of year.

The Legends Group leads the change
Many locals point to foreclosure on The Legends Group and the sale of its five 4-star courses (Moorland, Heathwood and Parkwood at The Legends Club as well as Heritage Club and Oyster Bay) to Arnold Palmer Golf Management in 2009 as a turning point.

Palmer immediately targeted local play, offering full-time residents of Horry, Georgetown and Brunswick counties a $10 annual membership into its “Loyalty Club,” which gives them the opportunity for year-round tee times at any of their five courses. The cost per round currently ranges from $29 to $43 and includes breakfast, lunch and two beverages with beer as an option, online handicapping service, discounts in the pro shop and occasional clinics.

Matt Biddington, director of golf at the three Legends Club courses, said Palmer didn’t have a special strategy for grabbing a chokehold on local play. He said the company offers similar plans at all of its properties throughout the country. The quality and diversity of the Palmer group adds to the already enticing offer,beginning with the three Legends courses centrally located off U.S. 501 only a few miles west of the Intracoastal Waterway. Heathland is an open “Scottish style” layout complete with pot bunkers and short flagsticks. Moorland, a nightmare for high-handicappers, was built to present the toughest in hazards and challenges from tee to green. Parkland is a tough, but fair, modern-style layout.

A few miles above the North Carolina border, Oyster Bay provides a collection of scenic holes, including an oyster shell-ringed green, that weave through wetlands. To the south in Pawleys Island, Heritage Club features spectacular live oaks and wetlands on an old rice plantation.

The rack rate for non-residents, who also receive the meals and drinks, at Legends Group courses are more than $100 in peak seasons. “Probably the biggest draw is the value we add,” said Biddington. “Package play always will be Myrtle Beach’s bread and butter. But local play is great to subsidize it. Our high level of course conditioning has remained amazingly consistent, even though our number of rounds have skyrocketed.”

National Golf signs on
National Golf Management, which numbers 22 courses after a merger between the Myrtle Beach National group and the Burroughs & Chapin group, also sweetens the pot for local golfers.

For $225, golfers can buy a “Prime Times Signature Card,” allowing them to play at a significant discount (from $30 to $53) at all NGM courses. Prime Time allows tee times to be made up to 48 hours in advance, but not until 4 p.m. the day before playing during the peak months of March, April and October. The deal includes a $50 gift certificate and free instructional clinics. Every fifth round is free. The annual renewal fee is $125. The upfront cost ensures that the pass is purchased only by locals or people with a second home on the Grand Strand.

“This program really meshes well withour business plan,” said Jim Woodring, executive vice-president of NGM. “With all the condos built and sold over the last 10 years, many of those were bought by our best out-of-town customers. They were no longer part of our traditional package plan, but many of them became Prime Times members.”

Though Prime Times courses at Pawleys Plantation, Grande Dunes, Long Bay and King’s North are among the top-ranked layouts in the area, several long-time favorites such as Litchfield Country Club, Willbrook Plantation and Pine Lakes Country Club are known more for great conditioning and beautiful scenery than long, forced carries over water hazards.

“We play a lot at the Prime Times courses,” said Stogner. “They offer us a lot of good values and a wide variety of places to play.”

Mystical Golf works its magic
Mystical Golf, a three-course group known for outstanding customer service and pristine playing conditions, offers affordable local memberships as well as lunch and beverages to all its players as part of its fees.

“For a guy who likes to play golf on a budget, it’s the best deal in the country,” said Mystical Golf owner Claude Pardue.

The Witch, the headliner of the group, winds through eerie wetlands occupied by alligators, foxes and hawks off the beaten path on U.S. 544. Man O’ War features water hazards on 17 holes with a clubhouse set above a large lake. The Wizard is an open “Scottish style” course with a castle-like clubhouse. They were anchors in the development of Carolina Forest.

Pardue is adamant that golfers want good value, which is not the same as cheap golf. “People want to look back and see that they got a lot for what they paid,” he said. “Promotions are nothing new down here. Before this, we gave away something else. It’s not different now than at any other time. There are just different promotions. The people who thought the golf explosion was going to last forever here are the ones in trouble. We came into this for the long haul. We didn’t expect the boom to last forever. You have to provide what the customer wants, not dictate what the customers buy.”

Ben Hunt’s Grand Strand Golf Association offers locals other options, including reduced fees at 65 Strand courses, social gatherings, tournaments and discounts at restaurants, hotels and entertainment venues, all by purchasing a MyGolf card at MyGolfGSGA.com for $29.99.

Hunt sends out a weekly newsletter to keep his members, which he says number in the thousands, up to date with the latest club deals. “My members get the lowest 48 hours rate at 65 courses,” he said. “We offer more than just great prices on golf.”

The Myrtle Beach Area Golf Course Owners Association also offers the Myrtle Beach Golf Passport—now available to non-local residents as well as locals—for $39, plus tax. The passport provides discounted prices (posted on its website) at 80 Grand Strand courses, as well as 25 percent off at some of the area’s most popular restaurants.

Though golf on the Strand has become largely a consumer’s market, the head of a popular women’s golf organization said bargain prices don’t benefit all consumers.

Keith Webb, whose Club 25 is for female golfers with a handicap of 25 or less, said low golf prices have eliminated some advantages that groups used to enjoy.

Club 25 has about 80 members who pay $200 per year in addition to golf fees. Though Webb said her group still pays the “lowest current rate,” it no longer enjoys a big price advantage in golf fees for its monthly events.

“It actually hurts groups like us,” she said. “People want to know why they should join Club 25 when they can get good prices everywhere. I have answers. ‘You get to play with different people and compete at your own skill level.’”

For the most part, Strand golfers are enjoying boom times during a downtime for the golf industry. Inexpensive membership programs offer regular access to a wide variety of courses, great prices and services. Affordable rounds at top-end golf courses often come with meals and beverages at no extra cost.
Despite the reduction of courses, many locals are able to afford more rounds at the best courses. Stier, a former member at one of the Strand’s handful of private clubs, can now play a lot more great golf for a lot less money. “I just hope this doesn’t stop,” said Stogner.