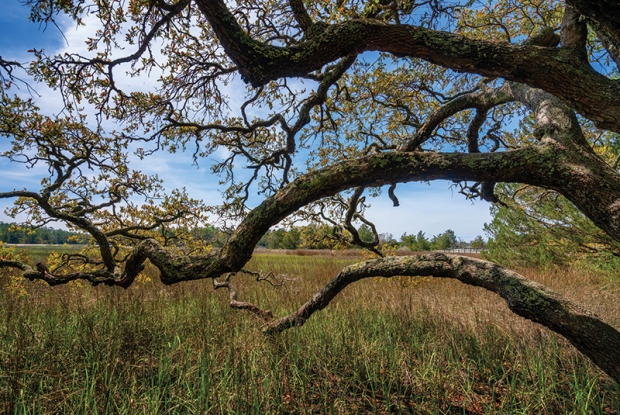 Anyone who has lived in or traveled around the eastern states that formed the original 13 colonies has most likely heard the phrase, “George Washington slept here.” The father of our country did a lot of traveling and spent many nights at many colonial sites–and many more attempt to claim his presence without proof. But here on the Grand Strand, we have a place where Washington really did visit and stay overnight. Today, it is a beautiful hidden gem for locals and visitors alike.

The Vereen Memorial Historical Gardens is a pleasant oasis from the hustle and bustle of the Grand Strand and provides locals and visitors a chance to touch history. It is a quiet park in Little River, close to the state line that many people don’t know about. The Vereen family hosted George Washington here and their spirits live on today in this pristine 115-acre tract of Carolina forest, saltwater marsh, small islands and waterfront. This site is overflowing with history and nature and should be added to your attraction list.

It is the site of the former Vereen family plantation and includes a preserved section of the original King’s Highway that ran from Boston to Charleston. Washington was traveling this road during his presidency in 1791 when he was the guest of the Vereen family. Lafayette had traversed here earlier in 1777, during the Revolutionary War.

The gardens are now owned by the Horry County Parks and Recreation Department and are open to the public. There is no admission fee and parking is free. The garden stretches more than 3 miles from U.S. Route 17 to the Intracoastal Waterway. It is mostly level and friendly for walking, jogging, bicycles and baby strollers. Dogs on a leash are also welcome (skateboards are not).

The park is part of what was once the 400-acre Vereen family plantation. It was given to Jeremiah Vereen Jr. in 1797. He was a descendant of French Huguenot settlers that traveled to America in the 1680s. When George Washington was president of the young nation, he visited the plantation during his Southern Tour in 1791. This is verified by an entry in Washington’s diary, which states he stayed at the home of Jeremiah Vereen. Vereen apparently gave the president and his aides a tour of the plantation before they continued their journey south. Although the original plantation house where Washington stayed has long since been demolished, there is clear evidence that “Washington slept here.”

The Vereen name ranks among the most well-known early settlers of what we today call the Grand Strand. The family has French Huguenot roots and the spelling of their name changed gradually from Varin to Vareen before eventually settling on Vereen. Jacques Vereen (born in 1650 and died in 1689) came to Charleston from France and married Suzanne Horry, daughter of Samuel Horry. Horry was the earliest known settler of the Little River area.

Jeremiah, a descendent of Jacques and Suzanne, was the first member of the family to settle on the land that is now the memorial gardens. He relocated from his father’s plantation near the Georgetown/Williamsburg County line, to this land that his wife, Mary, inherited.

Jeremiah’s son, also named Jeremiah, hosted President Washington in 1791 and helped guide him and his party safely through the region. Vereen’s older brothers settled in the area now known as Socastee. They all served in the Revolutionary War, fighting under the command of the “Swamp Fox,” General Francis Marion.

Even today, there are living Vereen descendants in business and civic activities throughout the Grand Strand.

In 1972, Jack Vereen, a direct descendant, donated 115 acres of the parcel to the Horry County Historical Commission. He had moved to Florida years earlier and grew oranges and grapefruit there, so he and his siblings no longer utilized the land in Little River.

The land was surveyed by surveyor C.B. “Burgin” Berry. At the time, Berry was on the board of the Horry County Historic Preservation department, which handled the arrangements of the donated land. Today, there is a beautiful, multi-use community center at the entrance to the Vereen Gardens named for C.B. Berry.

A variety of attractions

The Vereen Family Cemetery is in the center of the tract and is quite an attraction for history buffs. It is the resting place for several members of the Vereen family, including a number who served in the Revolutionary War. The Vereen family restored the cemetery in the 1950s and, today, it is the home to several remarkable monuments bearing historic dates, names and titles.

Paul McCulloch is director of Parks and Recreation for Horry County and oversees its care and operation. When asked about the park’s reputation as a “hidden treasure,” he says, “Many of our visitors remark ‘Wow, I didn’t even know this was back here.’”

McCulloch adds, “This is a common response when this gem of the Grand Strand that lies nestled amongst the hardwoods and pines of the Vereen Memorial Historical Gardens is first visited. Where else can you walk the trail that George Washington used for his Southern journey of 1791 or visit an old family cemetery? Whether you are walking, crabbing, swinging, or just taking in all that Mother Nature has to offer, Vereen Gardens is your one-stop relaxation for all that.”

Nature lovers will enjoy the wide variety of native plants and animals that make their home here. Bird lovers can observe dozens of species of lowland forest and aquatic birds. There have been reports of coyotes, but no confirmed sightings. Families of turtles can often be seen sunning themselves on fallen logs.

There are posters on the trails and in the C.B. Berry Community Center that guide and inform visitors. Maps and trail guides are available at no charge. Those who plan to spend a full day at the park will find two scenic picnic areas, featuring grills, shelters, a children’s playground with swings and portable toilets.

McCulloch also pointed out that the park is a beautiful location for weddings, birthdays, anniversaries and other family gatherings. No fees or reservations are required unless you want to reserve a shelter, a portion of the boardwalk or the C.B. Berry Community Center. Chairs, tables and other event materials are available when the C.B. Berry Center is rented.

The park is ideal for both those who seek an easy, casual stroll or those who want a more invigorating hike. There is a network of shady, secluded trails through the forest and boardwalks through the salt marshes. For those who wish to sit and take in the beautiful views, there are benches, swings and a gazebo. The hiking pathways form a loop that is three miles long. The park hosts a 5K race with 200 participants in May during the Little River Blue Crab Festival.

There is also a fishing pier at the Intracoastal Waterway and the park is accessible by boat. Mariners can find it at latitude 33.88; longitude 78.59.

A unique feature of the gardens is the “shell trees,” located at the far eastern end of the property along the Intracoastal Waterway. Here you will find several trees with low-hanging branches in which thousands of visitors have initialed and hung oyster shells. The beach nearby is strewn with tens of thousands of shells. Remember to take a marking pen and some string with you so that you can add your own memory to the trees. And take some time to check out the clever artwork, poetry, quotes, dates and pledges of love others have left behind.

When you first enter the park, or before you leave, be sure to check out the area behind the C.B. Berry Community Center. This is where you will find a well-preserved section of the Kings Highway, a route that ran 1,300 miles connecting colonial Boston and Charleston. It was a heavily traveled route in colonial times and saw some of the country’s most historic expeditions. Today, most of the Kings Highway has been paved over, but the portion that exists in the Vereen Gardens still has its original appearance. It is a humbling experience to quietly stand on this historic trail where so many famous people once traversed. 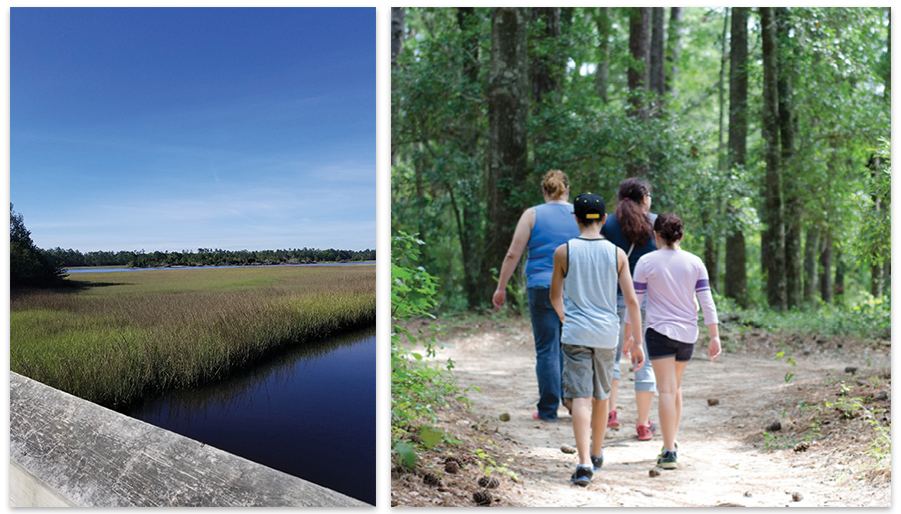 (Left to right) The views of the wetlands are spectacular; A family walks a trail at Vereen Gardens.

The Vereen Memorial Gardens and C.B. Berry Community Center are now managed by the Horry County Department of Parks and Recreation. They hold an important place in the county’s future plans for residents and visitors.

Here is a sampling of attractions and facilities at Vereen Memorial Historical Gardens: 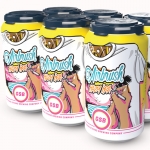 New Brews in the News

The all-new Grand Strand Brewing Co. is making beer at the beach and bringing downtown Myrtle Beach back to life 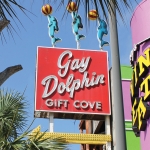 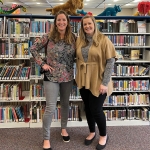