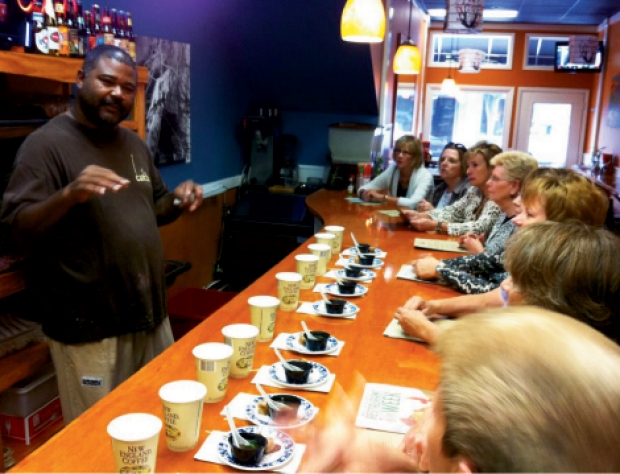 The thought of going on a food tour in Wilmington was intriguing. I have great affection for many of the restaurants along the Grand Strand, but the idea of eating at some of the finest restaurants in downtown Wilmington, while also being fed the city's rich history and hot gossip, was too much to pass up.

After a short drive up U.S. 17, my friend Julie and I, and six others, met up with Liz Biro on the Riverwalk at the intersection of Market and Water streets. Liz is a nationally recognized food writer, restaurant reporter, consultant, instructor and aspiring chef. She mixes a wealth of knowledge on local history and dining into an exciting afternoon of good stories and great food.

Our first stop was Mixto, located on the Riverwalk. The chef, Trinity Hunt, explained he gained his appreciation for fresh produce on his grandparents’ farm in Pembroke, N.C., while his love of fresh seafood came from his time in Baltimore. He served crabmeat, avocado and mango over butter bib lettuce with sesame seeds and a citrus vinaigrette. Yes, it was as good as it sounds.

The next stop was Aubriana’s with chef Alex Succop. The presentation was sliced beef, seared on a skillet and brushed with chimichurri sauce over creamy stone grits. The flavor was incredible.

The Phun Seafood Bar was our next target, and Shane Tyler and Keith Rhodes hit the bull’s-eye with a perfectly seasoned fish served over spicy Thai noodles.

We were then entertained at Caprice Bistro by owners Thierry and Patricia Moity with stories of their beginnings in France. The exceptional roast duck they served had just the right crispness to the skin while the meat was moist and tender.

Things were about to quicken as we were given a cooking lesson in the fast-paced kitchen of Manna, then treated to a mouth-watering braised pork shank.

The final stop was with Jody Carmichael at the Hot Pink Cake Stand for gourmet cupcakes that were almost too pretty to eat. The evening ended at the Level 5 rooftop bar for a panoramic view of the Cape Fear River—complete with romantic sunset.

The cost for this tour is $42 per person. For information, go to www.lizbiro.com.