A fishing expedition in the pristine waters off Hobcaw Barony 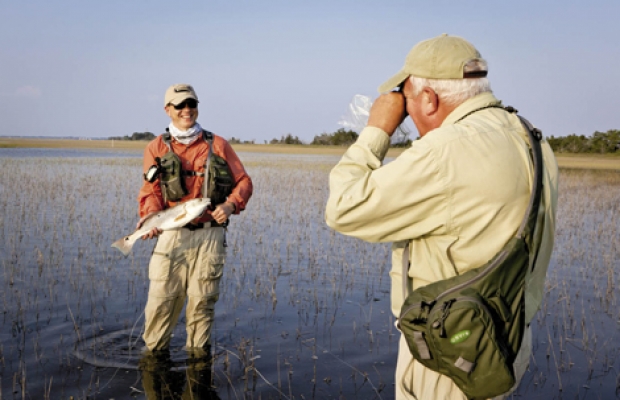 In 1718 King George I of Great Britain designated the region a colonial land grant (a Barony), and gave it to Lord Carteret, one of South Carolina’s eight Lords Proprietors. Later it became an important addition to the massive rice industry of the 18th and 19th centuries. In 1905, after its purchase by Wall Street financier Bernard Baruch, it became a winter hunting and fishing retreat for countless notables including President Franklin D. Roosevelt, British Prime Minister Sir Winston Churchill, and the nation’s wealthiest elite. A half-century later, thanks to a family trust, Hobcaw Barony still enchants visitors who come to experience its history and unspoiled natural beauty. A fortunate few even come to fish.

The nearly 18,000 acres of Hobcaw Barony may now be serving its greatest function yet under a foundation entrusted by Baruch’s daughter, Belle. Upon her death in 1964, The Belle W. Baruch Foundation was charged with Hobcaw’s preservation. A Discovery Center, two marine biology research centers, public tours, and special events and programs for all ages help preserve the legacy of the Baruch family. Though visiting sportsmen may drool at the possibilities, only a few dozen fishermen each year may cast lines from Hobcaw’s banks and on its tidal flats, and only then under the watchful eye of fly fishing guide Capt. Steve Thomas.

By appointment Thomas leads these fly fishing trips just a handful of days each month, and has been doing so for five years. He takes his hopeful anglers, dressed in full fly fishing regalia, out onto the tidal flats that stretch almost as far as the eye can see. These flats and salt pannes are the largest northernmost expanse of tidal flatland on the East Coast. Here the indigenous wildlife and sea creatures repeat millennia-old patterns of movement and feeding coupled to the moon and tides, and are part of an undisturbed flow of nature. The estuaries and salt marshes of the region are among the most pristine and protected coastal waters on the East Coast. It’s here that Thomas takes the fishermen, one or two at the most, to his favorite honey holes. It’s here where the spottail and flounder ride the tides to feed on countless one-clawed fiddler crabs, and it’s here, far away from the noise and crowds of the Grand Strand, that his clients test their skills wading through the Spartina grass and shin-deep water. Thomas guides his fishermen-clients some eight or nine of the warmest months of the year, with September and October prime time.

I tagged along with Thomas and his two clients on a recent picture perfect afternoon. A light sea breeze kept the mosquitoes at bay (mostly), and as the fishing commenced and the chit-chat between clients and guide ebbed, the first thing that struck me was the silence. Here in the midst of this vast tract of land and along the tidal flats of the north shore of Winyah Bay it was quiet. Very quiet. The occasional boat on the edge of the horizon might zoom by with a barely audible buzz, but otherwise this magical Barony and the flats at its borders were silent, and that’s the way Thomas and his clients like it—the fish like it too.

In late afternoon, with the sun slowly making its way west, the tide was moving in, pushed harder by a full moon that had yet to show itself. With the extra high tides, which only rise to the proper heights eight or ten days per month, come the fish. Flounder, speckle trout, black drum, and redfish (also called spottail bass, and a half-dozen other regional names), come in to feed on the fiddler crabs and minnows and Thomas is ready for them.

After retiring more than a decade ago from the North Carolina textile industry, Thomas made his way to Alaska, where for five years he was a salmon fly fishing guide. He came back stateside and created a position for himself as the only guide allowed to fish from the Barony. He has a slow but genuine smile, and seems to have an equally genuine interest in delivering on that which his clients pay him for—around four hours of catch-and-release fly fishing in a pristine coastal flat that has remained virtually unchanged for millennia. It would be hard to put a price on that experience, but Thomas and Hobcaw do: $250 for one angler, $300 for two.

“That’s an Indian shell midden,” said Thomas quietly. He pointed to what at first observation looked like a sandy mound 100 yards southeast toward the distant open water. “It’s one of five out here,” he said. The Native Americans who once plied the waters of everything and anything edible, left large mounds of mostly oyster shells, which have miraculously survived countless storms, tides, and erosion over centuries and still remain as proof positive of some of the earliest inhabitants of the region. While the 300-plus year history of Hobcaw, which is on the National Register of Historic Places, was fascinating to all, there were bigger issues at hand.

Thomas asked his clients if they had “seen any swirls,” to which came the reply “not many.” The redfish that hunt for crabs swim along in the shallow water and are sometimes so big that their tails cut through the surface, called “tailing.” Once a tailing redfish is spotted, it’s the job of the angler to land the lure, which in our case was a small hand-tied fly resembling a fiddler crab, near the fish without spooking him. Thomas and I hung back allowing his clients to stealthily explore Clam Bank Creek, one of the many slowly rising, winding creeks that make permanent channels in the pluff mud.

Thomas’ clients, mostly men, come in all varieties, and on this day Virginia attorney Jere Willis and friend Stuart Newton, who is the CFO of A&I Fire and Water Restoration in Myrtle Beach, came as a team. Thomas can supply fishing gear, but on this day his clients had most of their own. Like many fly fisherman, Capt. Thomas, named so by his U.S. Coast Guard license, finds the art and hobby of fly tying to be at least half the fun of the sport and a pastime that provides a lot of satisfaction—especially with a fish on the line. “I created this little fiddler crab fly,” said Thomas, smiling broadly, holding the small fly between his thumb and forefinger. “The first fish we saw we caught with it,” he said, speaking of the fly’s debut just weeks earlier. “It’s got a little rattle in it, and this thing that looks like a claw.”  Fly fishing, I was reminded, is not much like the bait casting or spin casting with which most fishermen are familiar.

“Going from bait casting to fly fishing is like hunting with a rifle and going to a bow and arrow,” said Thomas. “Night and day difference. When you cast with bait or lure, the weight of it pulls the line. With fly fishing the weight of the line pulls the fly.” With Thomas’ hand-made fiddler crab lure swirling through the salty air, whipped by a nine foot six inch fly rod, we finally got what we came for. Though it may not have been an exact fiddler crab replica, Thomas’ lure (and the angler’s skill) worked well enough to trick a 19-inch redfish onto the line an hour and a half into our expedition.

Willis was the lucky angler to first land what would have been a trophy fish, or at least an excellent dinner for two, had we not returned him to the water shortly after we caught him. Hobcaw Barony is first and foremost a wildlife refuge, and that includes protection for the fish. On Thomas’ best day his clients caught six fish in a four-hour period. Often that number is lower, sometimes they get skunked. That’s fishing.

The photographer and I left the trio of fisherman to continue working the rising waters, and we never heard whether or not any additional fish were caught that day, but I doubt it mattered significantly. It’s widely known that even a bad day fishing is still better than a good day doing almost anything else—especially in a place like Hobcaw.

Lessons are available for novice fly fishermen. Appointments may be made by calling Steve Thomas at (843)997-6981.