A three-star salute to a Conway native and decorated hero 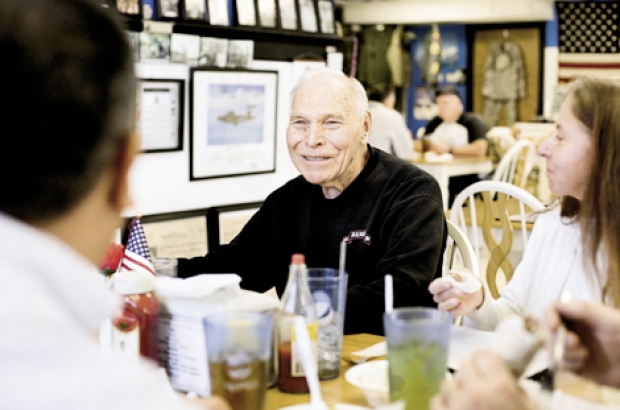 It’s nearing 13:00 in the long outparcel building post for the All Veterans Association (AVA) on the old Myrtle Beach Air Force Base. Chow is drawing to an end down the hall at The Veterans Café & Grille, but you can still hear rounds of laughter from tables full of vets and smell the fryer and hot griddle from Mash’s famous cheese steaks.

I’m sitting in an office across from retired Army Lt. General James B. Vaught, 85, and beside his medical walker. Vaught is 100 percent disabled, according to employment terms set by the Department of Veterans Affairs, but still 100 percent committed to fellow disabled soldiers who fought for their country and now need jobs.

“These men and women are completely out of the service,” says Vaught. “Their service connection/umbilical cord has been cut, so they’re out there in the great big world and now a lot of them don’t know how to adjust.”

Started in February, Vaught’s goal is to bring 400 severely wounded warriors (each are at least 50 percent disabled) from across the country to Myrtle Beach over the next couple years as part of the Horry County/Grand Strand Severely Wounded Warrior and Veteran Support Center. Once here, the organization will  enroll them in school, get them training and find them employment.“I’m trying to get it all started and then put someone else to work,” he says. “I’m a great believer in decentralization.”

Vaught reports that more than two dozen of these men and women are training at Horry-Georgetown Technical College to be LPNs and dental assistants. “These were folks who were medical technicians when they were on active duty,” he says. “So it can be very difficult to get in there, get brushed up, get their license and be approved.”

The new Pittsburgh Institute of Aeronautics down the road from the AVA will also take on aviation mechanic trainees; after two years, along with coursework at HGTC, the goal is to place them in jobs available at AvCraft at the Myrtle Beach International Airport. “Many were fixed wing and helicopter mechanics while in the service, so it wouldn’t be difficult for them to get up to speed,” says Vaught.

Vaught may be 85, but he’s certainly not sitting in his rocker after serving the Army for 38 years. He says he returned from the Vietnam War in a full body cast after a truck rolled over on him, but “proved them all wrong” that he would not walk again. You can still detect the confident cadence in his voice, the no-nonsense, unconventional style that garnered him respect and attention as a leader.

When I ask what he liked most about the leadership that earned him the rank of three-star general in the Army, he says, “I like to work with people, and do things for the soldiers that most officers wouldn’t do and didn’t do. And I still do. Because I was a soldier for a year before I was drafted. So I know that they’ll stomp all over you and you’ve got to yell like them or you won’t even get any coffee.  “There are four types of generals,” he continues. “The politician, the business manager, the warrior and the incompetent. I was a warrior.”

Vaught didn’t set out on that warpath, however. Born and raised in Conway, a direct lineal descendant of Francis “Swamp Fox” Marion, he graduated from Conway High School in 1943 as “Tiger” Vaught, the football captain with dreams of becoming a doctor.He was accepted at The Citadel in Charleston and attended three semesters of pre-med before being drafted at the newly lowered draft age of 18. Vaught was able to graduate, but was then promptly ordered to Fort Jackson for Basic Training in May 1945. He was commissioned by Officers Candidate School and shipped to Germany to fight as a “mud soldier” forthree and a half years as part of the occupation force after World War II.

After a short stay in the U.S., Vaught was sent overseas to Korea, where he served as company commander in the 24th Infantry Division during the Korean War and was injured twice.  In between leadership duties in the Korean and Vietnam wars, Vaught completed Ranger school, spent one year as an ROTC instructor and was chosen for the Armed Forces Staff College, National War College and duty in the Pentagon with the Office of the Joint Chiefs of Staff.

Vaught was assigned to South Vietnam in 1967 to serve as the battalion commander of the 5th Battalion of the 7th Calvary, responsible for the liberation of Hue city during the Tet offensive and the relief of Marines who had been surrounded in Khe Sanh. Throughout his two tours in Vietnam, Vaught is said to have played an integral role in the “Vietnamization” policy as combat liaison officer to a Vietnamese Paratroop Division.

After the Vietnam War, Vaught was promoted to Major General and served at the Pentagon as director of operations and mobilization for the Army. In 1980, he was the overall commander of the joint service task force during “Operation Eagle Claw,” a mission that failed to rescue hostages in Iran because half of the Navy helicopters suffered mechanical failure, but did facilitate Vaught’s development of the Joint Service Special Operations Command.

Vaught’s final tour was in Korea as lieutenant general, leading the combined United States and Korean forces (350,000 troops and 81 generals). Vaught retired from the Army in 1983. “In the 38 years I was in the Army, I quit a thousand times,” says Vaught with a laugh.

But he didn’t. And the United States Army has honored him with the Distinguished Service Medal, Silver Star, Legion of Merit, Distinguished Flying Cross, Soldier’s Medal, Bronze Star, Meritorious Service Medal, Air Medal, Joint Service Commendation Medal, Army Commendation Medal, the Purple Heart and the Combat Infantryman Badge with one star.  It also earned him the intangible respect and gratitude from the hundreds of thousands of troops he led across the world in nearly 40 years. It’s a legacy his family is proud to carry on: Vaught’s daughter is a retired Army major, his son is a retired Army colonel, another son served in the Navy.

Vaught’s reflection on his illustrious career, however, is more blunt. And that’s more his style: “My mission each day in those 38 years was to stay alive, for my soldiers to survive and to complete each mission. After 38 years, I could’ve been dead.”