ESPN anchor Wendi Nix is a champion amidst the NFL pros 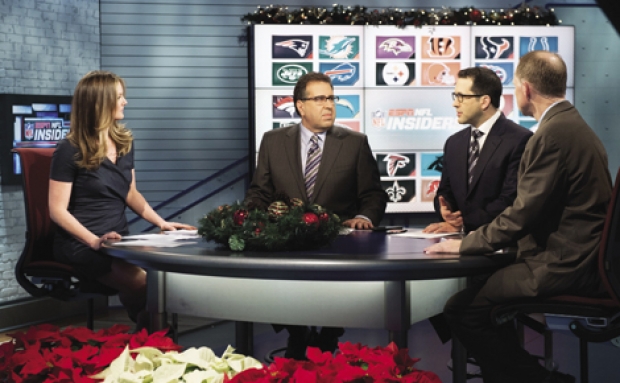 What does a pretty blonde know about football? For Wendi Nix, enough to land her nearly a decade of face time on ESPN’s NFL Live alongside longtime veterans of the game—all while wearing a dress, heels and a smile. And holding her own as strong as a lineman.

It doesn’t faze Nix, a Murrells Inlet native, who practically grew up on the sidelines with her dad, Wayne Nix, a successful high school and college football coach. The Socastee High School alumna was also a member of the cheerleading squad and track team.

“It’s just a cumulative process, being comfortable in this job after working for more than 15 years as a sports journalist,” says Nix. “I mean, I’m always learning, but after this many man hours and watching this much football, you just get a sense for the game. And because I get to be around some of the best players and coaches, they’re great at explaining the game and filling in the gaps.”

Nix’s college career was spent on the golf course, as captain of the golf team at Wofford College in Spartanburg. On campus, she wowed faculty and served as president of the Campus Union her senior year. She graduated with bachelor’s degrees in French and economics in 1996. Nix then graduated from University of Massachusetts–Amherst with a master’s degree in sports management, which she received in 1997.

While Nix remains a Southern girl at heart, her home is now in the North—in Manhattan, to be exact, with her husband, who works on Wall Street, and two stepdaughters. The work commute is a hefty two hours each way to ESPN studios in Bristol, Connecticut, where Nix is a full-time anchor for NFL Live, and ESPN2’s pre-, halftime and post-game segments on college football Saturdays. She also hosts a new show called NFL Insiders.

When asked if her DVR is packed with the weekend’s games for homework, she laughs. “No, I try to do as much live as I can. It’s hard to do DVR because I have to have one eye on the girls’ math homework instead at home. Most of the game-watching is done at work on weekends, when I’m watching up to 10 games at a time, which can be tricky.”

The road to Bristol began with Nix’s internship at New England Sports Network (NESN) and continued with her first job here locally at WPDE-TV Myrtle Beach-Florence in 1999, covering news, high school sports and NASCAR. Nix then returned to NESN as a reporter and anchor in 2001, followed by a move to FOXSports as a national sports reporter and FOXSports New England as an anchor-reporter. In 2003, she began work with WHDH-TV in Boston as a sports anchor and reporter. And in August 2006, she was recruited by ESPN as a reporter and host covering the NFL and NCAA football.

Before Nix’s full focus on football, she covered major golf tournaments like the U.S. Open, the Masters and the British Open, plus MLB baseball games and more.

What has changed in pro sports since her rookie year as reporter? “I think free agency has changed things quite a bit,” she says. “Players playing their career with one team is a thing of the past. Plus, the draft is a huge deal for us. People are always asking us questions and [are] enthralled by that. It’s a multi-billion dollar industry at the pro level, so it’s really interesting.”
Nix also voiced that the social media takeover in sports and news in general has made things much more interesting. The constant chatter on Twitter, the posts on Facebook, and YouTube uploads just mean that the pros at ESPN have to adjust to the demands to get the news and updates out there even faster.

Her hard work and credibility on-air haven’t gone unnoticed. In January 2009, she was the first woman to serve as master of ceremonies at the Walter Camp Football Foundation All-America Awards dinner, which honors the Division 1A College Football Player of the Year.

And on February 27, Nix will be honored by her hometown at Coastal Carolina University’s annual Women’s Leadership Conference & Celebration of Inspiring Women.

“I’m thrilled and honored, really,” she says. “I get busy and don’t get back to Myrtle Beach enough. …  I’m thrilled that we’ll all be together and we’ll make a vacation out of it.”

Nix’s parents now live in Charleston. “Going to Murrells Inlet by the water is one of the first things I’ll do. … It’s a place that still definitely feels like home.

“As for the honor of being recognized, I get so wrapped up in the job on a daily basis, but this is a good reminder that a lot of little eyes are watching and that we as women need to set a good example.

“It’s important to share that anything’s possible,” she continues. “That’s always been a huge deal to me, especially now that I have two little girls in my life. To have a job that I have that’s visible on a platform like that, it’s a real responsibility and something I take seriously.”

Nix has also newly taken on the roles of wife and mother and foresees a crossroads in her professional career. “But being OK with where you are helps to make that decision easier,” she says. “And that’s what I would want for anyone—to be comfortable enough in their own skin to know that what comes next will be fine.”