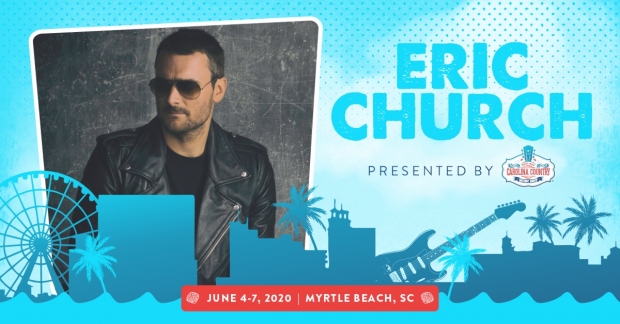 The Carolina Country Music Festival announced its second headliner on September 12. Eric Church will join Luke Combs as one of the main artists to perform at the oceanfront festival in 2020.

Church, who hails from Granite Falls, North Carolina, graduated from Appalachian State University with a marketing degree before deciding to head to Nashville to pursue his dreams as an aspiring musician. He released his debut album, Sinners, in 2006. The record yielded three singles that made it to the Billboard country charts.

He found even greater success with 2009’s Carolina, and in 2011 the album Chief earned him his first two number one singles—“Drink in My Hand” and “Springsteen.” His fifth album, Mr. Misunderstood, featured fan favorites “Record Year” and “Round Here Buzz.” Church’s sixth and most recent album, Desperate Man, was released in October 2018.

Church has won multiple Academy of Country Music Awards, including Album of the Year for Chief. He also received a CMT Award for Collaborative Video of the Year for the single “The Only Way I Know,” performed with fellow country music powerhouses Jason Aldean and Luke Bryan. In addition, he has earned several Grammy nominations.

The 2020 Carolina Country Music Fest will take place June 4–7. Get all your ticket info here: ccmf.com.