French cuisine and a Lowcountry catch create an award-winning recipe 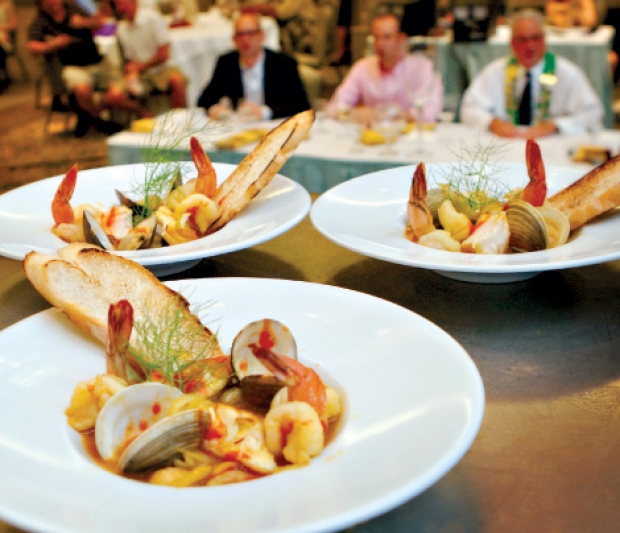 Tucked away in a century old Victorian house and long-turned restaurant, located near the fresh seafood markets of Little River, you’ll find Brentwood chef Eric Masson, recent winner of the Coastal Uncorked Food Fight. Since taking the reigns in 2007, the France native has established the Brentwood as the best restaurant for French cuisine and is continuously striving for flavorful excellence.

His Coastal Uncorked award-winning dish, the Bouillabaisse, is a combination of tradition, experience, tact and local seafood. The French stew, which originates from the major fishing port of Marseille, has long been part of Masson’s cookbook and is a concrete depiction of his philosophy, “creative yet simple with an emphasis on fresh, quality products.”

“It’s all in the sauce,” he said as he explained a standard of traditional French cuisine, sauce or broth that does not cover up or mask flavors, but rather complements and enhances the main component of the dish. The licorice taste in the broth from the fennel and saffron brings out much of the natural fresh flavors of the seafood. The dish, completed with a rouille-topped toast for dipping, easily won the hearts of the judges.

With no formal practice in the arena of competitive cooking, Masson still had an edge at the Coastal Uncorked competition. With three culinary degrees, training and experience, his proficiency shined through. When the mystery ingredients of hog snapper, little neck clams and shrimp, all local, were presented, “it instantly clicked,” he said. “I had randomly brought saffron and my assistant had fennel.” And he was off from there; his authenticity would go unrivaled. Accustomed to à la criée from his homeland, the screaming and scrambling at the open fish markets, the improvisation aspect was regular practice to Masson.

Despite the full plate of an owner/chef, where managing and cooking together is, “a lot of stress and the quest for perfection,” Masson finds time to host cooking classes, a wine club and plan cruises. In September, Masson will host educational courses where he will be teaching the bouillabaisse in a fun and laidback atmosphere. Also in September, he plans to take to the sea and cruise to France with friends and close customers.

The authenticity of Chef Masson’s technique alone is enough to make the trek into Little River, to the big old white house on the hill, and sample the award-winning dish. Want to try the recipe yourself? See below.

For the croutes and rouille

1. Heat 1/4 cup of the olive oil in a large saucepan. When it is hot, add onions and saute for a minute, add tomato and fennel. Stir the vegetables into the oil with a wooden spoon, add Pernod and flambe liquor. Then add another 1/4 cup of olive oil, garlic, orange zest, thyme and bay leaf.  Cook until the onion is soft and golden but not brown.

2. Add white wine and reduce by half.  Cut fish fillets into 2-inch pieces. Add pieces of fish, clam juice and cooked fingerling potatos to the vegatable mixture. Bring to a boil, then reduce heat and simmer, uncovered, for about 10 minutes. Add clams and shrimp.

3. Add saffron, check seasoning and add salt and pepper if desired.  Bring to a simmer again and cook about 5 minutes longer.

4. For croutes and rouille: Mix all ingredients together in mixer. Taste and adjust seasoning if needed. Spread rouille on toasted bread.

5. At serving time, place a thick slice of toasted crusty French bread in each bowl. Spoon the bouillabaisse over the bread.