Drink in the Winner!

The Little River retiree describes her hand-crafted creation as one with a “lovely peach flavor in a bourbon lemon-infused cocktail that’s refreshing and flavorful.”

Liskey says she was inspired by one of her favorite bourbon-based drinks, the Old Fashioned. The twist? A kiss of peach.

“I like bourbon and the Old Fashioned has the orange flavor in it.  I love the peach flavor, but I never tried it in bourbon,” she says. “So I bought the peach Schnapps and the Bulleit and kept working on my concoction until I thought it tasted good. Because the peach is a little sweet, I added a little bit of lemon juice.”

Liskey, a former flight attendant with United Airlines until 2019, was also inspired by the hotel bartenders she would watch and question as they mixed during her stopovers.

“Sometimes I’d have to be at hotels for three nights in a row, so I went downstairs to eat dinner at the bar and I would always ask them if they have a special drink. They would tell me what was in it and they’d mix it up for me,” she says, “which was always so interesting to me.”

While Liskey was never technically a bartender, she plays one at home for her husband and son (also a bourbon lover), when he comes to visit from Ohio.

“My husband’s not a bourbon drinker – he likes scotch,” she says, “but when we all went to Greg Norman’s and ordered my drink, he said he really liked this because he didn't taste the bourbon as much. So it’s a good drink for someone who’s not a bourbon drinker because you get that peach taste in there.” Liskey and her husband, whom she met in Houston, Texas, moved here in 2019 after they burnt through her frequent-flier miles visiting back and forth each month and to be closer to the shag dancing scene, which they love.

Liskey’s Peachy Bulleit, along with the runners-up cocktails, the Front Porch, Kindred Spirits, and High Eye Rye, were chosen out of hundreds of submissions by Greg Norman Australian Grille and each featured as part of their menu, weekly, for patrons to sample. Liskey’s Reader’s Choice winning recipe received a $200 gift card to Greg Norman’s and a spot on their drink menu for a month.

Congratulations, Linda Liskey! And cheers to you!

Shake in a cocktail shaker with ice. Strain into a bourbon glass over ice. Garnish with an orange peel. 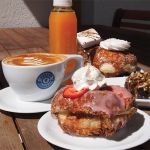 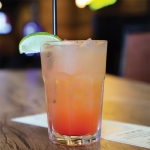 Tavern Local, from the Forest to the Beach 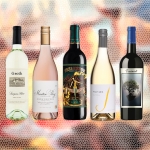 The Best Wines for Your Cookout