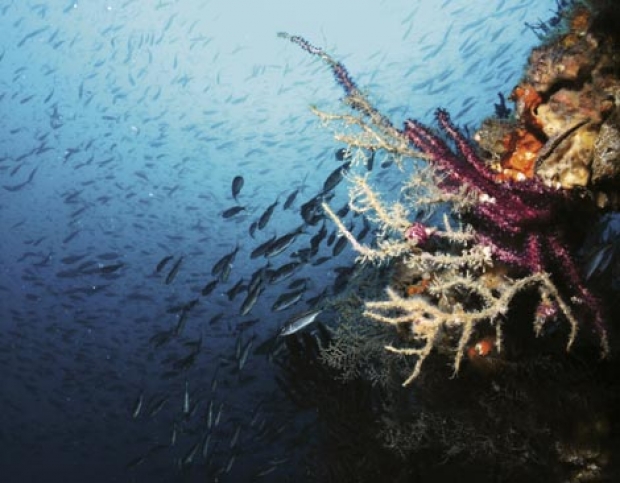 Those of us lucky enough to live along the Grand Strand get to spend a lot of our time in flip flops and cargo shorts. Our pastimes include surfing, playing golf, boating or just hanging out along miles of the golden ribbons of sandy beaches along our coast.

We also have the rich history of centuries past. A stroll through downtown Conway or Georgetown transports us back to a simpler time. A springtime visit out to Sandy Island or a historic plantation dotting the waterway allows us to contemplate both the glories and failures of our ancestors.

There are also lesser-known secrets. Beneath the surface of our waters lies a world teeming with adventure and history.

Since the first colonists settled along the South Carolina shores, ships of trade and war have traveled along our coast. For most vessels, the journeys were uneventful as they safely navigated from port to port, passing unnoticed out onto the open sea.

For others, however, it was the final journey. Through misadventure or wartime incidents, some ships would end up on the ocean’s floor.

Over the years, nature has taken hold of these wreckages, and they have become vibrant habitats for sea life, as well as time capsules housing artifacts from bygone eras. Today, adventurous souls can venture out from Murrells Inlet or Little River to experience firsthand the wildlife and history that inhabits these watery sanctuaries on an otherwise featureless sea floor.

SS Hebe
The Dutch freighter SS Hebe was a victim of circumstance during World War II.  She found her way to the bottom in the early morning hours of April 11, 1942. Steaming through the darkness along the South Carolina coast, bound for Curacao from New York City with a load of Venezuelan beer and insecticide, the Hebe was running no lights. Blackout conditions were typical of this time, so as to avoid drawing the attention of a menacing wolf pack of German U-boats that prowled the coastal sea-lanes of the western Atlantic.

At the same time, a smaller vessel, the British Sub Hunter HMT St. Cathan, was on patrol and approaching on a collision course. The Cathan was also under blackout orders, and before either captain could respond, it was too late. Shortly after the impact both ships were on the seabed in 110 feet of water.

Today, these two unintended casualties of the Battle of the Atlantic lie 45 miles out to sea from Murrells Inlet, resting about a quarter of a mile apart.

Throughout the years, the ocean has claimed the Hebe’s wreckage as its own. It now stands as an oasis exploding with life, as well as a time capsule containing artifacts from our seafaring history. For scuba divers, the location is known as the Twin Cities Wreck and offers a world-class experience featuring wonder and adventure. And that’s why I’ve come here today.

After the two-and-a-half-hour boat ride to the site, I was finally descending through the warm, clear, deep blue water that spins off of the Gulf Stream each summer. Moving down the anchor line, dozens of great barracuda float like silver logs in mid-water, undisturbed by my passing. Giant amberjacks and shining African pompano swirl in circles around the line as the shadow of the wreck begins to appear far below.

My buddy and I gently glide down onto the sand beside the stern section and take in the view of the eerie, hulking mass of steel extending out of sight into the distance. Sea fans and plant-like gorgonians lightly sway in the gentle current, creating the illusion that the ship itself is moving.

A pair of large sand tiger sharks casually swims by to get a better look at the odd, bubble-blowing creatures that have fallen out from above. The sharks are part of a larger population that makes the wreck their home during most of the year. Though large and curious with a mouth overflowing with ragged teeth, these sharks are a fairly docile species and are not considered dangerous to humans. We watch in awe as these superior predators slowly swim out of sight.

Beginning our dive into the current along the port side of the wreck, which slopes down into the sand due to the ship’s sloped orientation, we notice a collection of brown glass beer bottles that have spilled out of a cargo hold and onto the sea floor. Each one is imprinted with the words Cervezeria Regional, Maracaibo, indicating their origin in a Venezuelan brewery. One makes its way into my buddy’s mesh goodie bag as a souvenir, while I pause to consider whether the last person who handled it was one of the crew members during the ship’s final voyage.

Amidship, we come upon the vessel’s huge boilers rising high above the collapsed main deck. In the darkened recess below its supporting frame, Muppet-like toadfish lie camouflaged amongst the debris, while black sea bass lurk nervously about in the shadows. From here, and extending far out into the sand, the ship’s mast lies on its side. Swimming along its length, more beer bottles, green insecticide bottles and other debris litter the surrounding sea floor. A small pile of armaments, large shells for a deck gun or cannon, lay together, untouched for more than 70 years. They remain untouched by me as well, due to the possibility that they may still be live.

Approaching the massive upturned bow, tiny blue chromis and yellow butterflyfish flit shyly in and out of crevices. A slight movement on a steel beam catches my eye and an orange spotted frogfish materializes, a very rare sight as they generally inhabit the more tropical waters to our south. A glance at my gauges reminds me it’s time to turn the dive and head back to the ascent line.

On the way up, we travel along the starboard side, which sits at a higher relief than the port side. About halfway back to the surface, a sporty-looking sandbar shark glides beneath us, its high dorsal fin slicing through the water as it swims out of sight. We also spot quite a number of invasive lionfish, who hold their ground, displaying their feather-like fins and toxic spines. Though beautiful to look at, they have no natural predators in this part of the world and are predicted to have a negative impact on the future of many of the region’s fish species due to their voracious feeding habits.

Arriving back at the anchor line, we slowly continue our ascent. I linger a little longer than usual at my safety stop to watch a school of Atlantic spadefish—numbering in the hundreds—fin slowly by, sunlight reflecting off of their vertical stripes.

It was a productive day on the SS Hebe. Signaling with a thumbs-up, we finish our climb and board the boat, exhilarated by the experience.

Due to its depth and distance from shore, the Hebe is considered an advanced dive. At a length of 267 feet, it’s far too large to see it all in a single dive. Surface currents can be strong, but they generally dissipate within 20 feet or so. The ride out can take up to three hours, but for divers looking for a world-class experience, along with a trip through history and incredible encounters with wildlife, it is well worth it. Visibility can range from 25 feet to 100-plus feet. Most operators who visit the site do two dives on the Hebe.

Occasionally, they do special charters that include a dive on the St. Cathan as well, a smaller but no less interesting wreck.

The USS General Sherman
Back rolling into the Atlantic, six miles from Little River Inlet, I quickly descend the 55 feet down to the wreck of the General Sherman. During the Civil War she was a 200-foot blockade runner named the Princess Royal until she was captured by the Union Navy, renamed, and turned into a blockader. Although she survived the war, the vessel later sank in 1874 after encountering a coastal storm. Today she is one of the most popular dive sites along the Grand Strand.

The first thing I notice is the swirling clouds of bait fish parting as I pass through, revealing the highest point on the wreck, the giant boilers that powered the steam engines. Now fully encrusted by brilliantly colored soft corals, sponges and bivalves, you could easily spend an entire dive solely observing the small creatures that use this explosion of life for cover. Among them are minute sea spiders and crabs, tiny blennies and belted sandfish. In some of the larger crevices are soapfish and oyster toadfish, the latter warning the diver who gets too close with a grunt that sounds like a bad saxophone player.

Heading away from the boilers, I follow the propeller shaft toward the stern. Still attached, the huge propeller stands upright, revealing its encrusted blades. In the sand below, curious black sea bass gaze up at me. Some of the smaller juveniles playfully hover at my mask, looking in at me as we stare at each other eye to eye. Bigger species visit this wreck, too. Cobia, amberjack, stingrays and the ever-present barracuda can be found here in good numbers. During the last several seasons, tiger sharks have also frequently been spotted patrolling the wreck site, providing for several exciting encounters.

Aside from the extraordinary array of sea life, the Sherman is also well known for the artifacts that have been recovered. Among the shifting sands and wreckage of this site, bottles, belt buckles, buttons and ammunition have all been found. Moving over the remains of collapsed timbers and decking, I can’t help but think of the men, both Confederate and Union, who walked upon them during one of our nation’s darkest times.

Overall, the Sherman is an interesting site for divers of all experience levels. Its 55-foot depth allows for ample bottom time to take in a good portion of the wreck. Visibility can vary between 10 feet and 50-plus feet.
The short, 40-minute trip out of Little River Inlet allows you to have an enjoyable morning dive that gets you back on the dock by lunch.

Getting Certified
Becoming a certified scuba diver couldn’t be easier. In our area alone there are several establishments where you can receive the proper training to safely explore the Grand Strand’s coastal waters.

Training generally consists of several hours of classroom lecture, along with pool sessions where you’ll learn the necessary skills, as well as how to use and become comfortable with the equipment before heading out into open water.

The final step in the process is a series of open water dives where you’ll demonstrate your newly learned skills alongside a qualified instructor. For those short on time, the world’s largest dive training agency, the Professional Association of Dive Instructors (PADI), now allows you to complete the academic portion online at your own pace and convenience in order to avoid sitting in classroom lectures.

Scuba diving is a sport that can be enjoyed by anyone of average health at any age. When compared to other outdoor sports, scuba has an exemplary safety record, and once you have your “C-card” in hand a new world of adventure and exploration will open up to you.

For those already certified but have only gone diving while on vacation at other locales, you’ve been missing out. Right here at home you have a whole underwater realm to discover.

While the SS Hebe and USS General Sherman are great dive sites beyond the surf line of our local beaches, they are only two in a long string of pearls. Our local waters contain numerous other historic wrecks, as well as an extensive and still-growing system of artificial reefs deployed by the South Carolina Department of Natural Resources (SCDNR) and natural rock ledges that hold huge amounts of sea life.

So get out there and give it a try. There’s a great deal of beauty waiting deep beyond the Grand Strand’s surface.