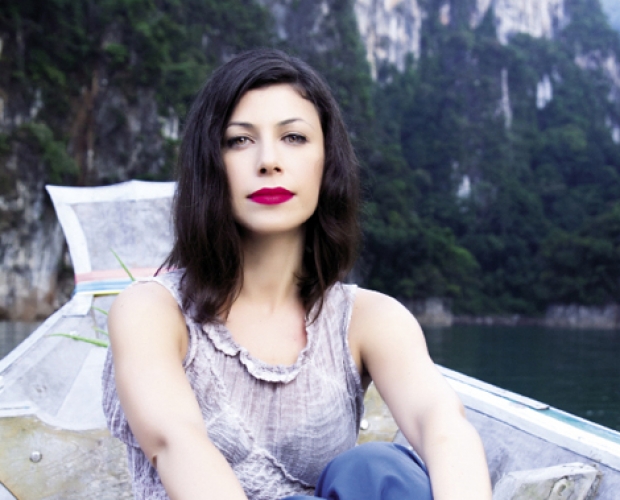 From the shores of Myrtle Beach to the sidewalks of West Hollywood, Mehera Blum has come a long way. Though her haute handbags are a hot item—they’ve caught the eye and adorned the shoulders of such stars as Eva Mendez, Ashlee Simpson, Denise Richards and Jessica Alba—her company, Blumera, isn’t about glam or glitz.  It’s about creativity, serendipity, and, in Blum’s words, “divine design.”

Blum’s company, whose name was coined as a blend of her first and last names, was born of the combination of particular circumstances and inner impulses that drive her life. She began her career as an actress, earning a degree from Boston University and studying at the London Academy of Music and Dramatic Art.  She started landing roles, including an appearance on Dawson’s Creek, even before graduating college.  With agents in both New York and Los Angeles, and after earning spots on Guiding Light as well as in Big Momma’s House II, Blum was well on her way to a very different kind of stardom. It was a rare and life-threatening illness—and her response to it—that opened a new path.

In 2004, in the midst of a busy acting schedule, Blum began experiencing extreme fatigue, memory loss, and even trouble reading and speaking her roles. Through a series of tests and consultations, she learned that she had near-fatal levels of mercury in her system.  Her response to the devastating news was to travel to Bali to recuperate.

Though her illness became the impetus for Blum’s career shift, the seeds for Blumera were planted much earlier. From a very young age, Blum had a passion for international travel, an eye for design, and a desire to find a connection between inner peace and authentic beauty. Her spirituality is rooted in the teachings of spiritual master Meher Baba; in fact, she is named after Baba’s closest disciple, Mehera Irani. At age seven, Blum traveled with her mother to India to meet her namesake. “I had been begging my mom since I was five to take me to India,” Blum said. “It was in me. I just had a thirst to see the world, and the time I spent with Mehera Irani was precious. It’s stayed with me a long time.”

As a result of her exposure to the Indian culture throughout her life, Blum says, “My thinking has evolved—my sight, the way I see color, texture. India is so vibrant that I think being there affected me a lot.” So when Blum traveled to Bali seeking peace and health, she was open to inspiration for a shift in direction.

“The path toward design kind of came from a prayer,” Blum explains.  “Six months earlier, I had prayed to find something that was more creative, not too stressful, and something where I could work with people I really like,” she said. “The handbags fell into my lap about six months later.”

Blum’s very first sales were spontaneous and reflected her eye for color and style rather than her own design skills. When she returned to New York, she brought with her some bags from Bali and India. “I would be walking down the street and people would stop me, asking where I got the bag,” Blum says. “I would sell it right then and there, like a gypsy. Within four months, Eva Mendez was wearing one of my bags in Life and Style magazine and there was a blurb about Blumera.”

The establishment and growth of her company were a result of Blum’s quest for high quality, authentic products. Essentially, Blum recognized a market for the kinds of bags she loved and found a way to make the products her own. All Blumera products are handmade and natural, from the hand-carved hardware to the hand-dyed fabrics (including her signature color, magenta) to the pure silk of the bags’ linings. Blum also includes a personal touch with each bag, incorporating an inspirational quotation from Meher Baba. “I like to think of Blumera not as a handbag company, but a lifestyle brand,” Blum explains.

Mehera’s mother, Laurie Blum, herself a world-renowned painter, concurs that the Blumera line is appealing not only for its beautiful designs, but also for Mehera’s personal essence within them. “When I first got a bag, I thought, ‘This isn’t my bag; this is Mehera’s bag,’ Laurie says. The things she makes have her heart in it, her soul.” Laurie notes that this quality is evident to other clients as well, both when they encounter her bags and when they meet her in person, in her shop in Hollywood. “People seek her out, they even come for guidance,” Laurie notes. “They like to have a part of her. People want to have her bags, her clothing, her jewelry, because it’s going to give them that lift they need in their life.”

Much like the nature of its owner, Blumera is open to any number of adaptations in the future. Blum has recently added scarves and jewelry cases to her line, and going forward the sky’s the limit, perhaps even including car interiors, home ware, or hotel design. “I’m someone who really wants everything,” Blum notes. “I do believe in timing, and, if you really trust, that it does unfold.”