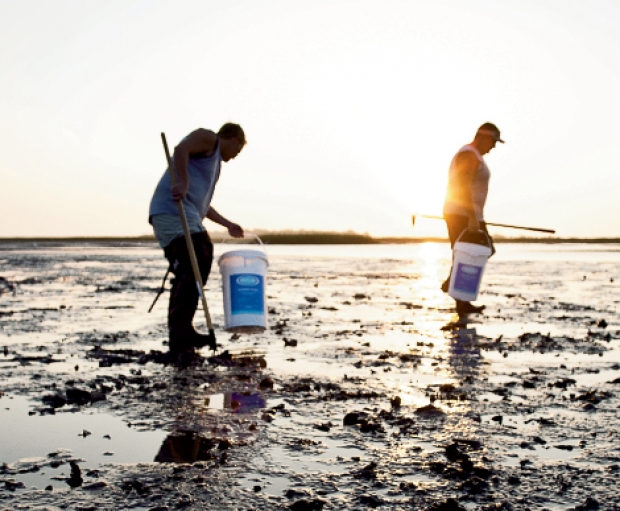 As a transplanted Yankee and quasi-New Englander (from Syracuse), I LOVE my steamers. Just thinking about consuming mass quantities of freshly steamed littlenecks dripping with real drawn butter, or cherrystones and quahogs cut up in clams casino, chowder, or even fried clam strips, makes me salivate. I’ve learned to feel the same about oysters; and I know I’m not alone.

Late last fall, at a friend’s backyard party in Surfside Beach, we ate fresh littlenecks scooped from nearby tidal flats earlier that day by the party’s hosts. This surprised me. Even after nearly 15 years living in Myrtle Beach, I had held the false belief that the Northeast held the monopoly on fresh clams; the home of the New England clam bake. Not so. Turns out we have lots of clams here on the Grand Strand and in most of the Carolinas’ coastal regions.

That afternoon we also ate oysters, and they too had been hand-harvested earlier in the day. With the revelation that anybody with a little know-how can clam dig and root for oysters right here in our backyard, I set out to discover the ins and outs of clam digging and oyster harvesting. Here’s what I found.

Getting Legal
Shellfish harvesting by adults 16 to 65 legally requires a South Carolina Saltwater Fishing License. These are readily available at outdoor stores and big-box retailers with fishing departments, such as Wal-Mart or Bass Pro Shops, and even at mom and pop bait and tackle shops. A resident license is not expensive—an annual $10 (non-resident is an annual $35). The state allows for the harvesting of two bushels of oysters and a half-bushel of clams, per person per day, in season (October 1 through May 15). Don’t get caught out of season or with more in your bucket or you’re facing big, big trouble. Other than private access in front of your creek-side home, you’ll want to stick to areas marked “State Shellfish Grounds” and “Public Oyster Grounds.”

Where to Go
The most popular public spot, at least on the south end of the strand, is at the Oyster Shell Recycling Drop Off just north of the Huntington Beach State Park entrance on U.S. 17 in Murrells Inlet. Don’t blink or you’ll miss this unnamed sand road with a tiny wooden sign identifying it. Oyster lovers know that the spent shells are vital to the health of the oyster population. The South Carolina Department of Natural Resources collects these mountains of shells and distributes them in the creeks of the area, bolstering the beds on which new oysters grow.

You’ll drive by a reclamation bin holding thousands of old oyster shells on your way to the gravelly, sandy beach, where there’s plenty of parking. On extremely wet days it’s safer to travel with a four-wheel drive vehicle, but it’s a nice, flat quarter-mile road leading to a popular area where kayakers and fishermen put small boats in and out of the creeks leading to the inlet. Oyster pluckers and clam diggers are also found there, slogging through the mud in abundance. Before you go, you’d better be prepared with a few items, some know-how and an accurate accounting of the tides. For this I relied on friend and sportsman, life-long Horry Country native James Jerdon, who read the tide charts and prepared us for a 7:00 a.m. rendezvous.

Why are the tides important?
This is strictly a low-tide endeavor. The accessible clams are a foot or more (or often many feet) deeper in the mud and silt. The oysters, which are not dug-in like the clams, are much more visible and accessible at low tide. Plus you’ll need to trudge through the mud and ankle- to knee-deep water to get out to where these tasty critters live. And that’s where preparation is key.

Gear
While some shellfish harvesters will feel for buried clams with their bare toes or tough it out with shorts and sneakers, the smartest, like Jerdon, will wear waterproof hip waders with good, solid boots attached, especially in the colder months. Jerdon, who owns Carolina Diversified Property Maintenance, brought along his assistant Chiquitha “Chetie” Turner, also decked out in hip waders. Jerdon suggests long pants, and on the coldest winter days, long johns under your waders, as the wintertime water can be quite chilly.

But even on pleasant, warm days, don’t trudge through the low-tide muck unprotected. Oyster shells are razor sharp and will cut you to shreds given the opportunity—most experienced diggers never attempt to harvest barefooted or in sandals. Then there’s the mud. It’s called “Pluff Mud,” maybe because that’s the sound made as it sucks the shoes off your feet with each step. It’s nasty, smelly, hard to negotiate, potentially dangerous if you’re stuck in it, and vital to our coastal ecosystems.  It’s where the fiddler crabs live, along with the countless microorganisms that the clams, oysters and larger blue crabs feed on.

In addition to the correct outerwear, you’ll want to have two five-gallon plastic buckets with sturdy handles and what’s commonly known as a potato fork. This long-handled rake is the perfect size for digging up clams and separating oysters from whatever they may be attached to. Some oyster harvesters like to carry a small hammer to bang apart oyster clusters. Just be sure to get to work before the rising tide urges you back to shore.

Start Digging
After you’ve been a few times, you’ll already have some sweet spots, or “honey holes,” in mind, but the clams and oysters can be almost anywhere in a suitable habitat. Sometimes you can reach less harvested areas by flat-bottomed johnboat, but you’ll still need to get out of the boat and time the tides properly.

Once you’ve reached your legal limit, get your oysters and clams home right away, or to a cooler full of ice, and you’re well on your way to gastronomic greatness.

Easy Preparation
With only a little scrubbing required, nothing is easier than preparing clams and oysters for the table, though oysters do require shucking and a bit of elbow grease to pry apart. Clams are easy. They’ll open up in just a few minutes of steaming.  Oysters, too, steam in just a few minutes, though they’re often enjoyed raw. Jerdon has found that any extra raw clams he’s harvested and not eaten will freeze well for several months.

But first things first. Smaller clams are more tender than larger clams, but the latter can be chopped up and used in clams casino and chowder recipes. Steamers, however, should be small; ideally about 1.5 to 2 inches across.

A good stiff vegetable brush, or even a clean wire brush, will help scrub the sand and dirt off of the clam and oyster shells before cooking. With clams especially, the cleaner the shell, the better the broth. Nothing compares to drinking the fresh, hot, naturally salty broth made from the water in the bottom of the steam pot mixed with the clam’s natural liquor. Add a dash of pepper, and pour off all but the inevitable few grains of grit at the bottom of the pot and you’re left with the sweet nectar of the ocean. Serve with butter and a few crackers, and you’ll close your eyes, reveling in the goodness.

Before cooking, be sure to discard any open or badly chipped clams and leave them unwrapped so they can breathe. Some suggest sitting the clams in a pot of fresh water for 20 minutes before cooking, as the still-living clams naturally filter the water and will expel bits of sand and grit.

Oysters, too, require a good, thorough cleaning before cooking, but once cleaned they’re easy to steam or place on a hot grill until heated through, unless you prefer them raw.

Eating
There are as many ways to eat clams and oysters as there are opinions on how best to do so. For my money, as far as clams are concerned, the tried and true method of steaming them until they open, popping them out of the shell with a small fork and dipping into melted, salted butter is as close to heaven as an eating experience can get. An adult can easily consume three dozen or more at a sitting.

Oyster eating is much more contentious, with some insisting raw is the only way to go, on a cracker with a little hot sauce, some horseradish and beer. Many more prefer to eat their oysters “roasted,” that is, steamed and served with melted butter and the same condiments. With oysters, a good shucker (a dull-bladed, stiff knife-like implement) is essential for prying apart the stubborn oyster shells. Don’t attempt to shuck with anything sharp or pointy or you may be visiting the emergency room for stitches.

Good for You
That their mild taste is a bit like that of the ocean itself, it’s nice to know that it turns out these little bivalves are good for us, too. Clams are low-calorie (a full dozen has only about 150 calories), low in saturated fat, and loaded with magnesium, manganese, B12, phosphorus, potassium, copper, selenium and iron, in part making them a complete protein with all the essential amino acids your body cannot make on its own.

Oysters have a bit more cholesterol than clams, but are equally low in calories and loaded with the good stuff like vitamin D, zinc and, in a single serving (about one dozen) you’ll find 92 percent of the average dietary requirement for iron.

On the downside, both clams and oysters are high in sodium, but not terribly, so imbibe with impunity. Just make sure you don’t pry open closed clams after cooking (a sign they weren’t feeling well before cooking). And don’t eat clams and oysters from polluted waters or if you have shellfish allergies. Seriously ill health from eating clams and oysters is extremely rare, thanks to better understanding of storage and freshness issues and the watchful eye of public health officials who monitor water quality and alert the public to outbreaks.

Regardless of your shellfish orientation—clams or oysters, steamed or raw—when you’re eating them fresh on the day that you yourself harvested them from the tidal creeks of the Grand Strand, the flavor and satisfaction is part of a time-honored tradition and part of what makes living on the coast so special.