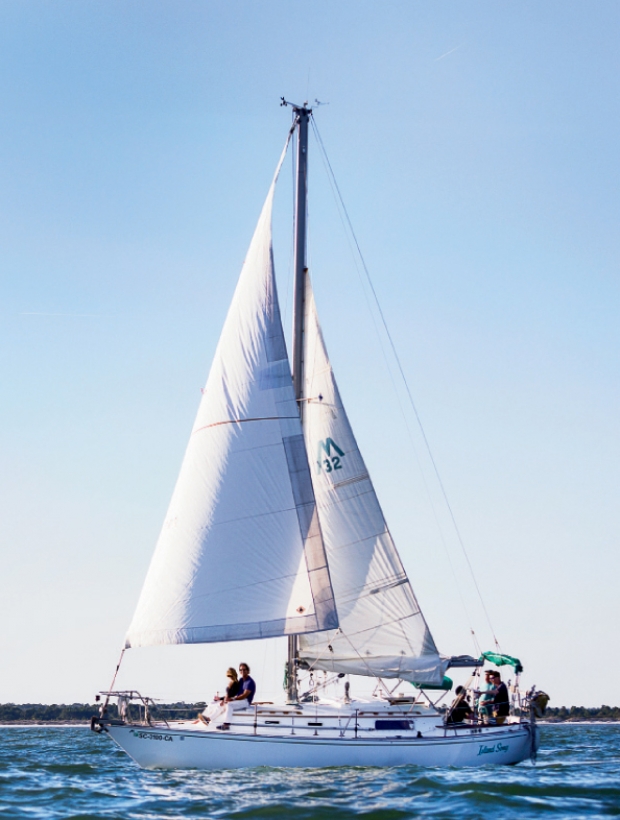 A certain romantic appeal, tinged with a hint of adventure, has lured many a sailor to head to open waters with the wind gently caressing the sails. This was the fascination that brought out the urge of this lifelong power boater to experience the same feelings—to feel that gift of nature in the form of a rush of adrenaline when the blowing wind is properly harnessed by the trimmed sail and performs the bidding of the sailor.

The first step was selecting a venue for lessons, and the choice was the Myrtle Beach Sailing School out of Cricket Cove Marina in Little River. Captain Jason Cox is an American Sailing Association (ASA)-certified instructor with 10 years of experience as a sailing instructor/owner, and he’s also a Myrtle Beach native. The vessel he likes to use for beginners is the “Island Song,” a 32-foot Morgan keelboat with sloop rigged jib and mainsail. She has room to sleep five, electric head/shower and galley. His focus is on near-coastal ocean sailing and his goal is to help others discover a passion for sailing.

After our first meeting it was apparent that before this romance was going to blossom, a lot needed to be learned. It started out easy enough with some basic knots: figure eight knot (easy), cleat hitch (a piece of cake), clove hitch (no problem) and bowline (a little rusty). Then came the preview of the sailboat itself. It’s not an exaggeration to say that sailing has a lexicon and language of its own. The easy part is to say that this vessel has two sails: the mainsail (pronounced mainsuhl) and the jib. The parts of the sail have names such as head, luff, leech, clew, foot and tack. Knowing and remembering the names is not terribly important unless you will need to know them for the test. One term is universal—there are no ropes on a boat, only lines. After instruction on points of sail, rigging, winches, trim, tacking and steering, it was time for my first sail.

The plan was to meet at the dock on a Saturday evening at 4 p.m. On the previous Monday, the long-range weather forecast was for a 70 percent chance of rain with high winds. By Friday, the chance had fallen to 20 percent, but with 15–25 mph winds. Sailors like to say “It’s all about the wind.” For a maiden sailing voyage, 25 mph winds are more than this inexperienced sailor would prefer. Saturday started out with light rain and high winds. However, as the sailing gods would have it, by 4 p.m. the sky was mostly sunny and the wind had dropped to 10–15 mph. Perfect.

The excitement was building as we boarded the boat. Things looked slightly different than the diagrams I had been studying, but before long the cockpit became comfortable and familiar. Cox then went over the correct methods of using the winches. Operating a winch is a critical part of sailing which allows you to adjust the sails with a minimal amount of physical strength. After a checklist and safety instructions were reviewed, it was time to cast off.

Due to heavy boat traffic on the Intracoastal Waterway, the plan was to motor out until we got to the Little River Inlet and then raise the mainsail. I had made this trip more than 100 times prior in my powerboat, but today was different. Instead of racing down the water at a high rate of speed, I was moving at about 4 knots and enjoying sights that I had overlooked before. The diners and patrons waved to us as we slowly passed the restaurants and bars on the Little River waterfront. Two bald eagles were spotted perched high atop pine trees that lined the shore between Vereen Gardens and the Calabash River. Butterflies were building in my stomach as the inlet came into view and the time was getting near to raise sail.

As we came even with Bird Island, Cox steered us into the wind and called “raise the mainsail.” With his step-by-step instruction and help, it went smoothly and we were quickly underway. We continued using only the mainsail until I became comfortable enough to also raise the jib.

Cox continued to remind me that the key element is the wind and to be sensitive to its speed and direction, all the while paying close attention to my every move. The trimming of the sails to match the angle of the wind direction soon became second nature, and before long my mind was drifting off to the ancient sailors who changed the course of civilization. There was a feeling of peace, serenity and oneness with nature as the wind pulled us gracefully over the gently rolling two-foot swells.

I sailed back to the dock a changed waterman. I had passed the actual sailing part of the certification process and now it was time to take the 100 question written test. A score of 80 was required to pass. I’ll just say that although I didn’t score 100, I did score above an 80. No longer just a power boater, a whole new world had been opened up to me. A world that I plan to visit often.

Myrtle Beach Sailing School offers classes ranging from one to six days with flexible scheduling. Prices start at $150 for the one-day school. Classes include live aboard and meals. Cox explained that even though he offers a one-day Introduction to Sailing class, he encourages an ASA-certified class. Certification is progressive learning, recognized worldwide and may also mean discounts on boat insurance.

For more information on the Myrtle Beach Sailing School, go to myrtlebeachsailingschool.com or call (843) 241-6874.