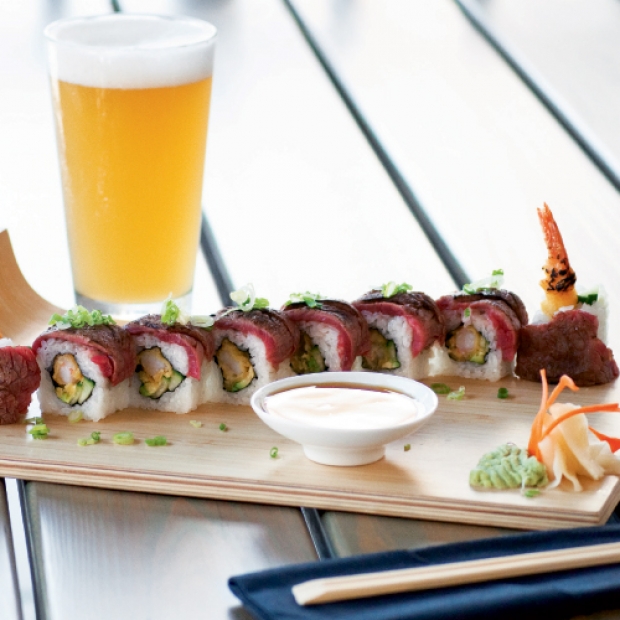 Lured from King Street in Charleston, the undisputed Lowcountry foodie mecca CO Sushi opened its newest location in March in The Market Common in Myrtle Beach, adding one more feather in the cap of those promoting The Market Common as a “dining destination.”

The Vietnamese restaurant turns heads for its Japanese sushi, as well as its Vietnamese-, Thai- and Asian-inspired entrees offered in an ultra modern, chic Times Square-styled eatery. With plenty of tables inside and out, Co, which means “feast” in Vietnamese, has quickly become a popular after-work huant and happy hour spot. A full bar with Japanese beer on tap and signature cocktails, such as the Cucumber Sake Shot ($3.50), is joined by top-shelf liquor and a decent wine list, as well as a weekday happy hour from 4–7 p.m.

Plenty of sushi in all the popular styles is offered in congress with creative (and very affordable) entrees such as pho— rice vermicelli, bean sprouts, cilantro, Thai basil and scallions cooked in a beef broth so hot it raises the temperature of the thinly sliced raw beef to medium rare as it sits in front of you ($12), and Wagyu, made from a blend of tempura shrimp, cucumber, avocado and rare Wagyu beef finished in a ginger sauce ($15).

Don’t bring the kids expecting to find mac & cheese, chicken tenders, burgers or fries. CO Sushi offers a sophisticated menu for adventurous connoisseurs of great food. But don’t be scared either; the staff will direct you toward dishes that are easy entrees into the world of fine Asian cuisine, dishes that any palate (even a kids’) should have no problem accepting with delight.