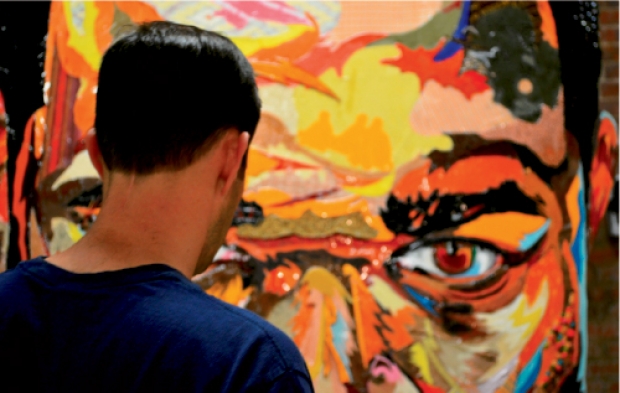 Take a rustic Southern town and insert 400 of the Southeast’s most talented artists for a nine-day exhibit. What have you got? ArtFields.

Despite its unlikely premise, ArtFields has caught the attention of the nation, and it’s living up to the hype. Now in its third year, the art competition and festival in Lake City was designed with two congruent goals in mind: to bring high-caliber artists from around the region together in a quaint South Carolina town and to reinvigorate that town culturally and economically through a focused celebration of quality art.  The event—partly because it offers upwards of $100,000 in prize money—has achieved both goals.

The third annual ArtFields competition is set to run April 24 to May 2, and more than 1,000 artists from the specified region of 12 Southeastern states applied for this year’s 400 available spots. The diverse array of accepted participants, including 19 from Horry and

Enticing prizes aside, one of ArtField’s most definitive and authentic traits is not only its location, but its manner of incorporating art into the fabric of the community. Lake City, population 6,675, is a perfect cultural touchstone for ArtFields. Deeply rooted in the Southern agrarian tradition, it’s been a top state market for strawberries, tobacco and beans over its nearly 300-year history. With small-town charm and tree-lined streets of family-owned businesses surrounded by warehouse markets and farms along the outskirts, Lake City embodies traditional Southern culture. During ArtFields, works are displayed throughout the city, many within operating businesses. Visitors might wander into an antique store and come across a watercolor piece or discover a sculpture while having lunch in a diner. Art venues include barber shops, boutiques, restaurants, music stores, historical buildings and shoe stores.

Coastal Carolina University art professor Logan Woodle, who will be participating in ArtFields for the second time this year, finds the event unique, surprising and rewarding for both artists and visitors. “You’re seeing art where art is usually not seen,” he noted. As he explored the event last year, he was struck by its scope, as well as the juxtaposition of art placed within the small-town environment. “To be surrounded by that much art is the most spectacular thing,” Woodle said. “To be overwhelmed by art, and for the people that are keeping that town up and running to be overwhelmed by art—that’s the takeaway.”

Woodle creates in metal and woodwork, weaving themes of Southern agricultural products, labor and lifestyle into his works. Last year, his High on the Hog metal headcheese mold was displayed in a “meat and three”-style restaurant, and he found the pairing of venue and art to be “completely appropriate and completely bizarre,” he said. “My work is made to speak both within the art community and also within the Deep South agrarian farming community.  To start that conversation, and see art for art’s sake and also get really good fatback in the same room—that’s what my artwork is about.”

Perfection, by Myrtle Beach artist Karen Edgar, is a charcoal and pastel image of her newborn grandson that will be aptly displayed at Bold & Sassy baby boutique. Last year, Edgar’s Angus Campbell, featuring a mountain man playing a mandolin, hung at Buddy’s Music.
In addition to culture and community, ArtFields is about exposure—for the artist, for the viewer and for Lake City. “It’s an incredible opportunity for the state of South Carolina. I love that it’s such a large regional show,” said Alexandra Knox, a CCU art professor whose mixed media Revulsion Compulsion has been accepted for the event. Jim Arendt, a CCU art professor whose denim piece Jamie won the top prize in 2013, agrees. “Some of the best contemporary artists who are working this year will be there,” he notes. “It’s an opportunity to see people’s work that you otherwise might have to travel to New York or overseas to see.”

When millionaire businesswoman and philanthropist Darla Moore first imagined ArtFields as a way to revitalize her native city, she knew the roots of imagination and creativity were already in place. Moore had faith in the resourcefulness and ambition of the local business, arts and residential communities, and under her watchful eye the vision has been realized. With a crowd of 30,000 expected for this year’s festival and multiple new businesses having opened since its first year, ArtFields has brought not only exceptional art but also opportunity to Lake City.

Here’s a look at some local artists and their works that were accepted into ArtFields:

Sandi Blood: Smoke Signals
A resident of Murrells Inlet and a member of the Seacoast Artists Guild, photographer Sandi Blood applied to ArtFields for the first time this year. “I was drawn to this event because there are no rules for what art is,” Blood notes.  “Everybody lets you be really creative in what you submit.”
Blood spent some time strategizing the topic and content of her submitted work. “I figured lots of people would send pictures of critters, landscape pictures or tobacco barns. I wanted mine to be different.”
So she decided on smoke. Blood recalls that achieving the perfect image was challenging: “I struggled with getting the setting with enough light so you could see the smoke swirls and see the movement without having it blurring.”
The result, Blood says, conveys a sense of imagination and wonder. “It reminds me of when you were a kid and you would just lay down and look at the clouds and try to imagine what they look like.”

Karen Edgar: Perfection
Myrtle Beach artist Karen Edgar is a one-year veteran of ArtFields; her charcoal and pastel piece was accepted in 2013, and this year her Perfection will be displayed.
Edgar appreciates ArtFields because of the variety of works on display.  “They leave it open for a lot of different mediums and types of art work,” Edgar notes. “They’re really diverse.”
Perfection reflects a major life event: the birth of Edgar’s first grandson.  As the ArtFields contest deadline approached last fall, her selection of a topic was “kind of a no-brainer, because he recently had been born, and about the only thing I could think of was drawing a picture of him.”
The image depicts the baby “being held by his dad, my oldest son,” Edgar explains. She worked from “a close-up photo of him holding his dad’s finger in the first hours of his birth.”

Logan Woodle: Gravy Pig
Exploring food as an element of culture has been the focus of Logan Woodle’s work over the last several years. His ArtFields submission, Gravy Pig, draws connections between Southern provisions and their origins.
“There are all these foods that for a long time we considered “trash” foods—red-eye gravy, head cheese, chitlins. I’m exploring the labor that goes into it and the preciousness it holds in a family and society,” Woodle explains.
His metal gravy boat may appear whimsical on first glance, but both the form and substance of the piece are symbolic. “With the red-eye gravy boat, I’m paying tribute to where it came from,” Woodle notes. “I’m making cheap food very precious by surrounding it in baroque, valuable vessels.”
When deciding which work to submit to the competition, Woodle considered the nature and audience of the ArtFields event. “For me, it’s about finding the work that tells the part of the story that I want to connect to the people that are there,” he says. “It should be a piece that stands alone and communicates the idea efficiently. It hits them, you get the point across, and they move on.”

Alexandra Knox: Revulsion Compulsion
Sculptor Alexandra Knox will wait until she’s assigned a space at the ArtFields competition to create her work.
“It’s a site-specific installation, so whatever site they’re assigning me, the piece will be built specifically for that space,” Knox explains. “The evolution of the piece will change depending on the space.”
Knox created a proof of concept rendition of the piece for submission to ArtFields, and it involves the use of cheesecloth, satin and red dye to create an impression “the viewer can’t look away from.”
It represents disease, Knox says. “I’m going to make the space look like something is spreading and infecting it.” It’s meant to convey the human fascination with the unexpected and the horrific. “It’s like rubbernecking; we don’t want to look, but we’re weirdly drawn to it.”
To create the piece, Knox will use balloons to create bulbous forms in the cloth, while the red dye and satin will create the impression of “something oozing and bloody, and still growing.”
Knox’s selection of fabrics is essential to the piece’s effect. “Cheesecloth is utilitarian—it’s used for treating wounds and involves the idea of healing, while satin represents high fashion and luxury. The juxtaposition of those fabrics is at the basis of our two contradictory impulses: revulsion and compulsion.”