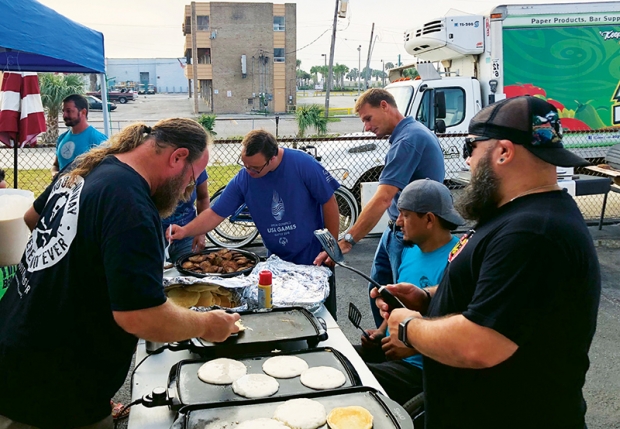 Volunteers and evacuees banded together to help at “Camp Midtown.”

In late September 2018, Horry County faced historic flooding in the wake of Hurricane Florence. The rising rivers forced families to flee. Some went to shelters with only the clothes on their backs, while others had nowhere at all to go.

Enter our hometown heroes, local property manager Tina Corley and Myrtle Beach Midtown Inn & Cottages’ owner Jaret Hucks. These two caring citizens pulled off something quite extraordinary and inspired others to help do the same.

A lifetime resident of the area, Corley, whose family had been in the downtown Myrtle Beach hotel business, felt her anxiety grow with early forecasts. “I was petrified, “ she remembers. “I live in an older beach house just a few blocks from the ocean. I was scared for me, scared for my city and scared for everybody. I don’t know if you’d call it survivor’s guilt, but I knew those of us who were spared needed to help those who weren’t so lucky.” Corley got busy doing what she could.

“I started a Facebook page; “Myrtle Beach Motel Owners; Do the Right Thing,” she recalled, “without much luck.” Corley’s own family had been out of the business for years, but she knew from experience that the occupancy rates would be low. Corley reached beyond Facebook to personally call on these owners to step up, and one did so in an extraordinary way.

Jaret Hucks, who is also from a family of longtime local downtown hoteliers, said, “sure, great idea,” and opened his doors, initially to some 68 families and 350 evacuees. For weeks on end an evacuee family occupied every single room. Many of the families housed at the Midtown were multigenerational with elderly and infirm members, others with school-aged children and newborns. All have stayed, or are still staying, free of charge.

Hucks told Steve Hartman of CBS’s On The Road that he and Corley put out the word to those in dire need to “come stay at my house, until you can go back to yours.“ The CBS Sunday morning program was viewed by some 600,000 nationwide.

“We threw ourselves into this thing,” continued Corley “not knowing what on Earth we were doing.” Her enthusiasm and Hucks’ hotel were the inspiration for others in the community to get deeply involved, including Paige and Nate Anderson [Nacho Hippo Restaurant, Puffin Ice Cream & Dogs], Marnie Kennedy [Island Bar] and A&A Produce. “So, so many individuals and businesses helped,” said Corley.

“People just walk in and make donations,” said Hucks, who was as surprised as any at the outpouring and size to which the relief effort has grown. 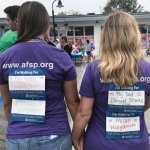 Walking Toward the Light 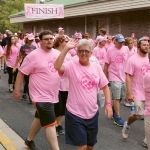 Wheel to Surf offers the chance for disabled surfers to get back out on the water
GENERAL TAGS:
myrtle beach / restaurant / Nacho Hippo / Hurricane Florence / Tina Corley / Jaret Hucks