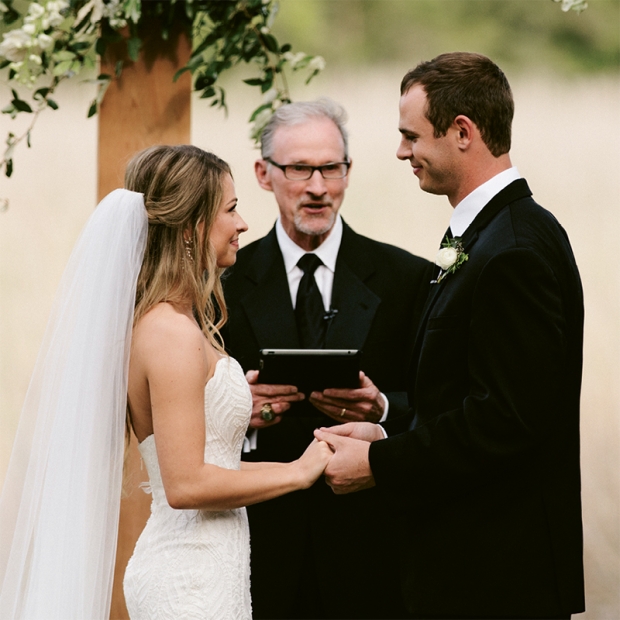 We’ve all seen wide receiver Hunter Renfrow light up the end zone in Death Valley Saturday after Saturday, but the light of his life for the last six years has been Camilla Martin, who became Camilla Renfrow on April 13, 2019. The two met in middle school, but never really talked until their senior year in high school.

“He had never had a girlfriend before … he was just very focused on school and on sports and always the athlete that all the girls liked, but he never really dug into that,” says Camilla.

“And I was a really serious ballet dancer and actually left my junior year to go to a dance school and then ended up coming back my senior year,” she adds. “So I was kind of the same way: I was always focused on dancing after school and had never been to a high school football game. That’s kind of what drew him to me, from the start, was that I could not care less at all about sports.”

Camilla and Hunter had two classes together senior year at Socastee High School, and during one SAT vocabulary words study session at Barnes & Noble in The Market Common, they hit it off and wound up talking for hours about everything but vocabulary words!

The couple continued to date as they started their journeys at Clemson University, where Hunter made the cut onto the football team as a freshman walk-on. The athlete made strides on the field—especially after Hunter’s first National Championship game, which was a test to the strength of Camilla and Hunter’s relationship.

“It was definitely a huge adjustment when he started doing really well and started getting recognized more,” she says. “And then after that first National Championship game, it was kind of like a night and day difference. It went from us being able to go out to eat to getting stopped multiple times during dinner.

“He handles everything a lot better than I do,” Camilla continues. “He’s so chill and doesn’t really ever get worked up or mad or anything. … But for me, I think it was a little hard just because it’s a big change to be able to have that quality time, when you feel like you’re sharing it with everyone. It’s also the biggest blessing and this is his dream to be doing what he’s doing and to be able to touch people’s lives, to share his faith as his platform. He realizes that God has given him this talent and he wants to be able to help people however he can.”

In their senior year at Clemson, the week before spring break, Hunter proposed to Camilla before they flew out to Colorado for a family vacation. It was their belated Valentine’s Day date at a steakhouse in Clemson. He had football practice on the actual holiday.

“He asked me what I wanted to do after and suggested we go to the rowing docks to watch the sunset, which was not out of the norm for us because we take our two dogs there all the time,” says Camilla. “Once we arrived, we started walking and I asked if I could go back to the car and get my jacket, but he said ‘Let’s keep going.’ That’s when I started to have an idea of what was going on. He led me down the dock where he had candles and roses lining the way. Each rose had a card attached to it of a reason why he loved me. He read each one to me as we made our way to the end and, once I had a bouquet of roses in my hands, he got down on one knee and asked me to marry him.”

The couple’s wedding day was just as special and magical as that night, held on a spring day at the gorgeous oceanfront DeBordieu Club in Georgetown with an outdoor ceremony and reception for 400 guests.

“My parents live in Pawleys Island and I love the water, so we felt this was a great spot because you feel like you’re on vacation,” says Camilla. “That, and they could accommodate our 400 guests.”

To complement the picturesque backdrop of DeBordieu, Camilla wanted her wedding ambiance to be crisp and clean, with shades of white gathered in a modern-boho vibe. The elegant, wispy theme was woven into the bridesmaids’ attire, an assortment of long dresses in a neutral color palette, each in the style of their choice.

Camilla wowed in her mermaid-style gown by Kate McDonald, a Charleston-based designer. Her bouquet was made even more special with one of her late grandmother’s amethyst and diamond ring attached to the stems.

“As I walked down the aisle holding my bouquet, I could feel her ring in my fingers and knew that she was right there with me watching down on the whole day,” she says.

For the reception, guests were treated to several dinner stations dishing out Southern comforts, like shrimp and grits, braised beef short ribs with polenta and asparagus, glazed chicken with succotash and pimento cheese three ways with mini biscuits and fresh fruit. Guests also got to cut a rug with the live band Steel Toe Stiletto.

“They were so awesome and ended up bringing a horn section that was great,” says Camilla. “Some of Hunter’s teammates love to sing and dance and got up on stage with them, so it was really fun.”

Camilla’s favorite moment from the day was her first look with Hunter before the ceremony, something the two traditionalists hadn’t planned on doing.

“But I was so emotional the whole day and could not keep it together,” she says. “It wound up being super special for me, for us to have that time, to get my tears out, just me and him before 400 guests’ eyes were on us.”

The newlyweds are enjoying their new home in Oakland, California, where Hunter plays wide receiver for the Raiders and Camilla works as a social media manager. They’ll spend the off-season at their new house in Greenville, South Carolina.

Special Touch: Camilla’s bouquet was made even more beautiful with her late grandmother’s amethyst and diamond ring attached to the wrap, right at her fingertips.