The national drink of Brazil finds a home at Rioz

Like the Brazilian cowboys who carve charcoal-roasted meats at your tableside, Rioz Brazilian Steakhouse’s signature drink, the Caipirinha, is as exotic and traditional as the gauchos who serve it.

A muddled mixture of Brazilian rum, lime and sugar shaken with crushed ice, the Caipirinha is the perfect accompaniment to the rich flavors of a Rioz’s meal. Sweet, citrusy and tangy on the palate, this national drink of Brazil may have first originated as a slave drink, later becoming a common beverage imbibed throughout the country and now around the world. The process dates back to 1532 when the Portuguese brought the distillation of sugarcane to Brazil to create Cachaça, now widely recognized as a type of Brazilian rum. A distant cousin to the daiquiri, the Caipirinha harkens back to old Brazil, first imbuing early colonization, then hard-fought independence.

Be sure to order one tableside at Rioz, but if you’re dying to try this easy-to-make drink at home, see the recipe above. 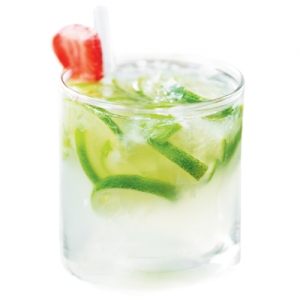 Cut lime into four wedges. Place in the bottom of a sturdy 8-ounce glass with the sugar. Muddle until mixed well (a wooden or rubber muddler is recommended). Fill glass with crushed ice and rum and shake thoroughly. Garnish with lime wedge and enjoy!
Meal:
Beverages