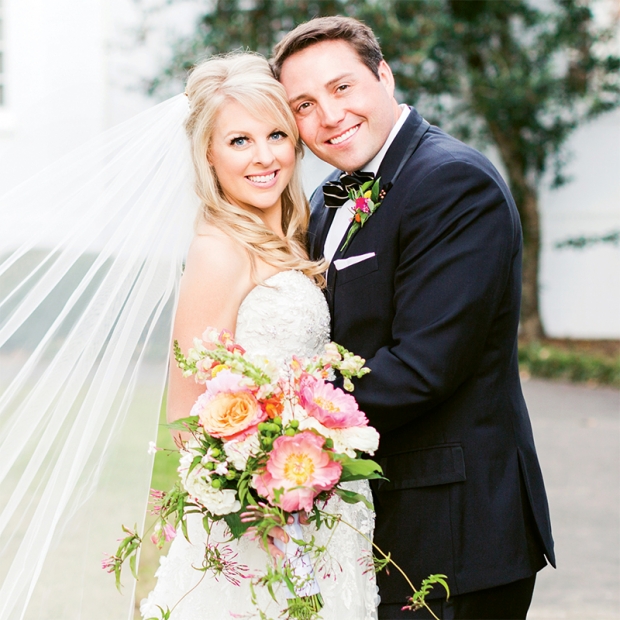 To describe Bree Moore and Scott Eggleston’s first encounter as a religious experience is, well, accurate.

One Sunday morning in January 2017, after Bree had served as an usher during the service at First Presbyterian Church in Myrtle Beach, a handsome young man (Scott) approached her at the back of the church, told her he was new in town and asked her if she wanted to get a cup of coffee with him.

“He wanted to learn about what kind of activities the church offered to young people, but thinking I wasn’t the person for this task, I asked if he wanted to talk to a minister instead,” says Bree. “Being persistent and realizing I wasn’t getting it, he kindly said no and said he wanted to learn from a young person’s perspective. Thinking quickly, I knew I wouldn’t want to get up early before work for coffee so I asked if he wouldn’t mind happy hour instead, and Scott was totally fine with that.”

The two went from church to cheers at their first outing at Liberty Brewery & Grill at Broadway at the Beach, continuing to meet up as “friends” for the next couple of weeks.

“I just really couldn’t decide if he was a friend in town or if he might be interested,” says Bree. “I wasn’t sure because was giving me no vibe!”

But, after the vibe happily became known that they were more than just friends, Bree and Scott were inseparable.

“He’s such a happy person and has such a positive attitude toward everything,” she says. “He’s like a breath of fresh air, has a good work ethic and is very ambitious, which I connect to. We’re pretty much on the same page about a lot of stuff. And it’s really cool that I’ve met that person.”

A little over a year later, Scott was ready to take things to the next level on the 3rd of July at the top of the Ferris wheel at Broadway at the Beach. He had orchestrated a faux story to get Bree there that involved working with the manager of the Ferris wheel to shoot a promotional video for him.

“When we got there, I could see he was a little fidgety, but thinking it was because of the video shoot, I didn’t worry about it,” says Bree. “All of a sudden, the same playlist of songs from earlier in the car started playing, which included ‘Marry Me’ by Bruno Mars, and when we got about halfway up on the Ferris wheel, he got out a small box and got on one knee and proposed!”

Afterward, the newly engaged couple celebrated with family where it all started at Liberty Brewery.

The March 30, 2019, wedding took place where their story first began, with a ceremony at First Presbyterian. And to say this special day was planned and designed down to the last creative detail is an understatement; as owner of Bree Moore Design & Calligraphy, Bree had her hands on everything.

With the bridal party clad in classic black and white, her choice of the brightest, most colorful flowers took center stage in the ceremony and reception.

“I wanted the wedding to have a loose, airy feel with the flowers and the florist nailed it, with a fresh, wildflower look to our bouquets and all the bridesmaids wore the same flowers pinned in their hair,” says Bree. “We’re not really white and greenery kind of people.”

Bree walked down the aisle in a Justin Alexander gown, wearing her “something old” diamond stud earrings crafted from her late grandmother’s diamonds and her mom’s engagement ring; a bracelet inscribed with “My Wish For You,” which Bree’s grandmother wrote in a Christmas card to her years ago; and a pair of Kate Spade cheetah bowtie heels. Bree’s love for cheetah print, in fact, was infused throughout the design elements, such as cheetah print on the inside of the wedding cake and fondant on the middle layer and a cheetah bowtie worn by the father of the bride. The bride also wanted to honor her love for her grandmother, who passed away several years ago, with a crossword puzzle about the newlyweds’ families on the back of the dinner menu that Bree designed. Her grandmother was known to do crosswords every day.

“She was just a very cool lady,” Bree says.

The party at the 21 Main Events at North Beach reception started with the couple’s signature cocktail, “The Sasquatch,” a nod to Bree’s cat, complete with ginger beer, vodka, lime juice and a cat head stirrer. The bar menu was hand-drawn by Bree on a black surfboard.

Bree’s handiwork was also seen on the hand-painted table linens, oversized gray ornaments boasting hand-lettered table numbers, coloring books for the kids’ table, and the names of the wedding’s 200 guests on the back of neon acrylic geometric Christmas ornaments that served as wedding favors.

Guests also enjoyed an indulgent, sit down dinner of filet mignon, chicken or fish served with asparagus and the steakhouse’s signature mac and cheese and a Caesar salad. The three-tier cake was paired with an ice cream bar complete with homemade ice cream, waffle bowls and toppings.

But that wasn’t all for the extra special touches. For the father/daughter dance, Bree and her dad choreographed a slow dance that broke out into “Thriller,” and for the newlyweds’ first dance, Bree and Scott performed a complicated number that included ballroom, contemporary, swing and hip-hop—and a costume change—choreographed by Bree’s professional dance partner from her Dancing with the Horry County Stars competition.

And the magical night ended with a Second Line parade exit, a nod to Bree’s late grandfather, who lived in New Orleans, and a sendoff of Happy Meals for the guests’ late-night snacks.

“I used to love going to Bourbon Street and hearing all the jazz music,” says Bree.

The Myrtle Beach native, who works as digital marketing director at First Presbyterian, remains here in Myrtle Beach with her new husband, who owns and works as an insurance agent for Goosehead Insurance.