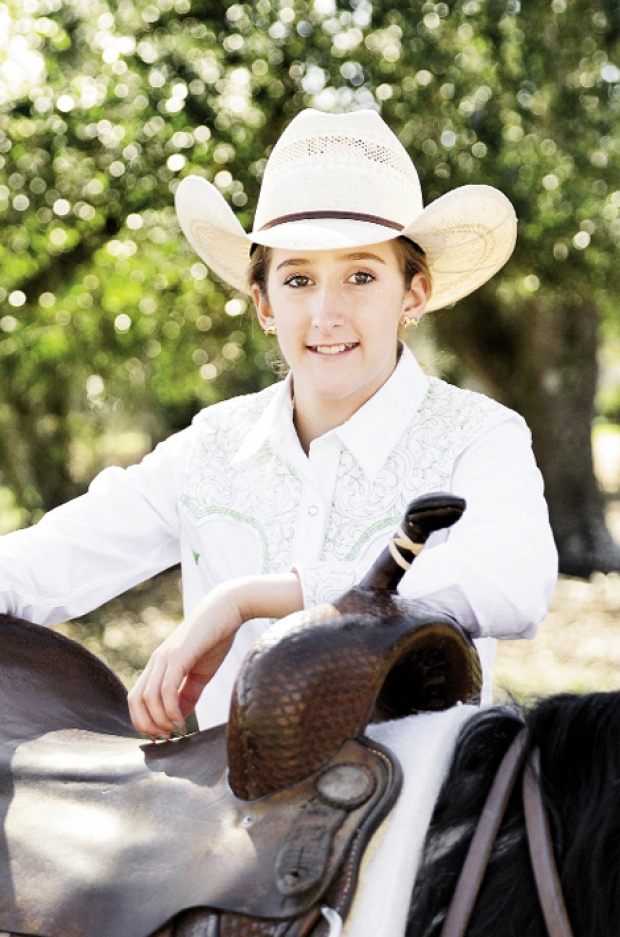 Sydney Thompson may seem like a soft-spoken teen, but don’t let her fool you. Her passion for her sport screams of unbridled fearlessness. The 14-year-old Socastee High School freshman just took home the American Paint Horse Association (APHA) World Championship in Youth Cutting from the Fort Worth, Texas, competition.

On an evening before the Thompsons sit down for a Sunday family dinner, Sydney, with a smile bigger than Texas, shows me the embroidered jacket, bejeweled belt buckle, pretty blue ribbon and framed photograph of her mounted on her paint horse, Fancy Bobbette. If you aren’t exactly sure what the sport of cutting is, it’s OK; you’re not alone.

“Most of my friends think it’s cool that I’ve been winning these awards,” says Sydney,  “but most of them have no idea what cutting is.”

What cutting isn’t is a polite parade of quiet showmanship. In fact, it’s one of the world’s fastest-growing equine sports, packed with action and drama for the trifecta of those who participate: horse, rider and spectator. “Cutting is more fast-paced and great for the adrenaline,” says Sydney.

The sport sprung up on cattle ranches of the Old American West, where the cutting horse separated cattle from the herd for the all-practical purposes of vaccinating, castrating or sorting. The first cutting horse competition was held in 1898 in Haskell, Texas. In 1946, the National Cutting Horse Association (NCHA) was founded. And today total purses at NCHA-approved shows alone exceed $39 million annually.
The cutting horse and rider must work as a team in cattle-handling—that’s separating a single calf from the herd, then guiding it into the center of the arena. Though it sounds simple, it is far from it. The rider must quickly maneuver starts and turns to prevent the calf from escaping back into its natural herd.

The approach, or the first brush stroke of this artful sport (which is a combination test of intelligence, training, breeding and skill) must be done in two and a half minutes. According to the National Cutting Horse Association (NCHA), performance is judged by the selection the calf, which means making sure the rider selected their target by choice and not just at random. Neither horse nor rider may change calf selection without penalty.

When the cut is complete, the athletic challenge really begins. “After you go into a group of about 20 cows,” explains Thompson, “you have to work with your horse to start pulling them off to the sides. Then there’s the last one standing, and I’ll put the reins down on my horse so she knows to work the cow.”

This loosening of the reins demonstrates to the judges that the horse has the freedom of calf selection, anticipating the calf’s movements without the need for direction. A loose rein is one of the keys to a highly marked performance. Scoring is based on the time spent with each calf. The horse may “quit” the calf, says the NCHA, without penalty, but a three-point penalty will be assessed when the calf is obviously stopped or turned away from the cutting horse. If a calf is “lost” under any circumstance, it’s a five-point penalty. Even a good performance can end with a low score if a calf escapes the horse’s control.
National events are scored by a five-judge panel, and the overall performance is evaluated based on the challenges made by the calves cut, the horse’s instinctive reactions, and errors in judgment made by horse or rider during the competition. Each judge submits a score ranging between 60 and 80, with a score of 70 being average at the end of the contest period. After the high and low scores are discarded, the middle three are added together to obtain the final points earned.

Pre-competition, Thompson trains her paint horse at her Aunt Christie’s farm in Nesmith, S.C., where Fancy Bobbette lives full-time. “The horse training is what helps make this most successful,” she says. “I put a lot of time into training, running the horse to keep her fit. We’ll do an exercise with a flag to train her to move quickly around the calf.”

Thompson began her cutting career two years ago, after she’d had enough of the pomp and circumstance of western pleasure. “I did not like that sport,” she says, rolling her eyes. “It’s so slow, and you just go around in circles.”

The competition judges horses on manners and suitability as they walk at a slow gait around the outer edge of the arena, with the winning horse showing he is a “pleasure” to ride.

That’s a yawn for Thompson, who also loves hunting and archery. “I like getting out in the woods and just listening to nature,” she says.

In fact, she placed an impressive sixth out of 300 in a recent archery competition held in Fleming-Neon, Kentucky.

The tomboy’s sharp eye and natural instincts in the great outdoors are innate, having grown up around animals and even having raised goats of her own out at the family’s farm, Thompson Farm & Nursery, in Conway. At age 5, she was competing in tots’ leadline classes, a child’s first real introduction to horses.

Thompsons’s two younger sisters are also earning equestrian ribbons and riding in her footsteps.
“With Sydney, she’s always been real dedicated to the things she likes,” says her father, Scott.

“She’s like a different child when she’s on a horse,” says mom, Amy, “especially when she’s competing against older athletes. And, I mean, it’s not about just hopping on and riding a horse—you have to love all aspects of horses, from feeding to cleaning up.”

Thompson’s love for animals is bred into her future, as she hopes to attend Clemson University and study to become a veterinarian. For now though, her eyes are focused on the prize again, as the cutting season kicks off in the spring and runs through summer. The Thompsons will travel with horse trailer in tow to competitions across the Southeast.

There’s no stopping this millennial teen, who’s grabbing life by the reins rather than lazing around waiting for everything to be handed to her. And that’s more refreshing than a coastal Carolina breeze on a hot summer’s day.