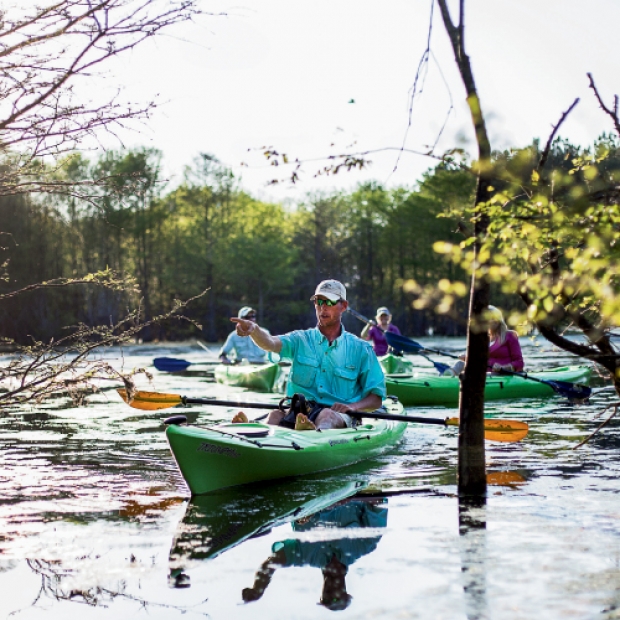 There are moments in life when the time is right, the location is perfect and the stars align to produce an event so magnificent that for an instant your breath is taken away by the beauty. So it was last month on a kayaking trip into a well-kept secret location only a short distance from the Grand Strand beaches.

Justin and Lori Summerall are the guides/owners of J&L Kayak Ecoventures in Little River. They started off the tour with a short primer on Kayaking 101, and then onto the water we went. Justin had promised the tour of a lifetime on the Waccamaw River and, boy, was he about to deliver. The trip started upstream with beautiful scenery and abundant wildlife as our guides told stories of the history of the river and its tributaries. After about an hour of paddling we stopped, pulled the kayaks over a bank and then launched them again onto an adjoining lake. The lake was almost completely covered in Duck Weed, aquatic vegetation that dissipates and seems to dissolve when touched by the paddle. A three-foot alligator watched with curiosity and a bald eagle circled overhead as we made our way toward an opening at the far end of the lake. As we got closer, birds of all sizes started appearing above the tree line, and it became apparent that on the other side of the opening was another lake. But not just any lake.

It was as if we were entering another land—one never seen by another human. This lake had a two-acre wooded island that was occupied by more than 1,000 marsh birds. Maneuvering the kayak into and around the island, nests made of sticks and twigs were every five feet at varying heights, some with eggs. The sight was incredible. “It feels like a fairytale and I’m Pocahontas,” said Melody Kennedy, one of the kayakers on the tour.

There was an astonishing variety of birds to be viewed, some within 10 feet of the kayak. Justin says the Great Egrets are the first to arrive at the nesting colony with their stunning white plumage and 6-foot wingspans. They are a monogamous bird and return each year to the same nest. The Great Blue Herons follow shortly after and remain monogamous for that year only since the male prefers to make a new nest each year. The Cattle Egret is a gorgeous bird, with white feathers and a hint of orange on its back to match the orange of its bill. A hunched posture and short, thick neck make him a photographer’s dream. There were only a few of the endangered Wood Stork, an impressive bird with a 6-foot wingspan and dusky yellow, down-curved bill.

It was an amazing sight to see what are usually considered solitary, silent birds gathered together in this great number, cackling away in raspy mating calls that sounds more like croaks. They come by the thousands from up and down the coast to this place each year to form their multi-species breeding colony on the Grand Strand.  Once you’ve experienced the spectacle of them coexisting, you will have a new appreciation for the beauty this earth has to offer. The colony is only active for about two months and then it is just another small stand of trees until they return 10 months later.

J&L Kayak Ecoventures offers a wide variety of experiences. Each adventure is specifically designed that day for the customer using wind, tide and other factors to maximize fun and make each trip unique. You can also arrange for hourly rentals at a location of your choosing between Myrtle Beach and Sunset Beach, North Carolina. The kayaks are dropped off and picked up at your convenience.

Some of the other options offered by J&L Kayak Ecoventures are:

Scenic Marsh Tours
Lazily touring the salt marsh creeks of Cherry Grove. Great for families and first-time or experienced kayakers.
Romantic Couples Tour and Twilight Tour
Spend a memorable and romantic time on the water at sunset. Customized at your request.
Kayak Crabbing Tour
Catch dinner and still have time to hunt sea shells and explore the private island.