Riding the wind along the Grand Strand 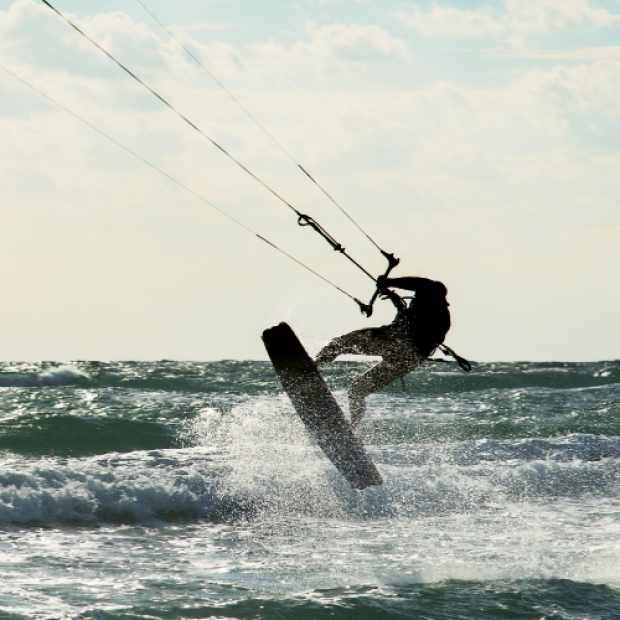 He flies through the air with the greatest of ease, launched from the peak of a perfect wave courtesy of the ocean’s compliant winds. Onlookers point from shore, slack-jawed at the daring young man engaging in a maneuver that has him spinning, flipping and flying off the surface of the water and high into the air, traversing the length of a football field before softly touching down. Enormously popular to the north of us along the Outer Banks and to our south in the greater Charleston area, kiteboarding (also called “kitesurfing”) is slowly gaining air here along the Grand Strand, too.

While kiteboarding is not exactly a new sport, the prevalence of the brightly colored rip-stop nylon kites attached to riders skimming our local waves is becoming more commonplace year-round, but especially in the warmer summer months. Because of the considerable expense for even starter equipment ($2,500–$3,000), and lessons ($600– $1,000) most kiteboarders tend to be self-employed, middle-aged or at least affluent enough to invest in what may seem like an extreme X Games hobby. The male-dominated sport, not unlike surfing, is really only feasible when all the conditions are right, and that means steady winds, not too weak or too strong, blowing in just the right direction.

“In high school I used to sit in class, look out the window, and see the trees start to blow and think, ‘Man, I gotta get out there,’” recalled 27-year-old Dale Slear of Myrtle Beach. Slear, now living in Charleston, was first a competitive wakeboarder in his teens and early 20s before finishing school at the College of Charleston and partnering in Wine Awesomeness, an entrepreneurial startup he co-founded with a few fellow millennials.  Friend and wakeboard enthusiast Andy Owings Jr., co-owner of Andy Owings Music in Myrtle Beach, mentored Slear in wakeboarding and later introduced him to kiteboarding.

Owings, also once a competitive wakeboarder, discovered the adrenaline-producing fun of kiteboarding after watching a much older acquaintance demo the kites in the late 1990s.

“I knew a guy named Rick Nelson who was in his 60s,” said Owings, who was taking a break in between piano deliveries. The 40-year-old known as “Junior” has worked in his father’s music store since he was old enough to reach the register.
“Rick had been to Cape Hatteras and brought kiteboarding back to [Myrtle Beach] around 1999,” said Owings. “The kites were way different. We went out to a field at the old Air Force Base with a bunch from Sail & Ski Connection and he demoed the kites for us and we were sold. Back then you only saw kiteboarding in Hatteras and Hawaii. After seeing the demo I asked for one for Christmas. I think I was one of the first in the area to kiteboard.”

How did this fascinating sport that makes new converts faster than any other watersport get its start?

Rudimentary predecessors of modern kiteboard kites have been flown for centuries, assisting in transportation and even used in warfare. Kites were once used to pull wagons filled with supplies along windy stretches of road. They were used for entertainment and even reconnaissance in the days before aeronautics. Even those early kites could lift a man 100 feet into the air, but they were dangerous and unwieldy. In the early 1800s, British-born teacher George Pocock experimented with large kites strung in tandem to lift people as an amusement and to pull carriages. In 1903, inventor and thrill-seeker Samuel Cody crossed the English Channel in a small kite-powered boat. As long as there have been kites, people have been trying to figure out how best to employ the wind.

Though the early kites, made of heavy canvas, hardly resemble their modern ultralight counterparts and despite the fact that the serious use of kite power for anything but recreation is all but gone, the fundamentals of harnessing the wind remain unchanged.

“It’s freedom,” said Slear, from his Wine Awesomeness office. He and his young business partners are just the kind of 20-something guys you’d expect to see kiteboarding, but you’d be wrong.

“I’d guess the average age of most kiteboarders is early- to mid-30s,” said Slear. Fellow kiteboarding enthusiast and kiteboarding instructor, Matt Marvin agrees. “Definitely middle-aged men make up the bulk of the sport,” said Marvin, 23, who teaches Astronomy and Physical Science at Summerville High School near Charleston. “I’d say the majority are 35–45, some younger. Lots of doctors and lawyers.” Marvin, also from Myrtle Beach, returns each summer to teach kiteboarding through Sail & Ski Connection.

Both Slear and Marvin agree that kiteboarding is not for everyone.

“You can’t just say ‘I’m going to go kiteboarding this weekend,’” said Slear. “You have to wait for the wind to be right, so [the sport] lends itself to people with a more flexible lifestyle, who can jump out of work when the wind is up. A lot of them are their own bosses, lots of self-employed people.”

“The initial cost can be intimidating,” said Marvin. “We’ve got a good strong community of kiteboarders, but it will probably never catch on like surfing where every high school kid has a surfboard. It’s most popular with middle-aged professionals.”

While it may be the 30 and 40 somethings who dominate the sport, it’s the athletes in their 20s who have the strength and stamina to master the really extreme stunts that occasionally land them in the news.

“It’s every board sport wrapped up into one,” said Slear. “Surfing, skateboarding, sailboarding, wakeboarding, and then you add wind and a kite.” And a fair amount of gymnastics and the nerve to pull off the stunts Slear and those like him perform. One of Slear’s YouTube videos, now approaching a quarter of a million views, shows him launching off a wave near Bald Head Island, N.C., during Hurricane Irene in 2011. It’s really quite unbelievable.

And he’s not alone. Countless videos of kiteboarders in extreme winds populate the Internet, and not surprisingly, none of the kiteboarders appear to be middle-aged.

The kite, with a floating inflatable edge, is made out of rip-stop nylon. It’s as large as an automobile and can pull you at ridiculous speeds across the water. The world speed record is nearly 60 mph. The longest distance ever traversed nonstop was off the coast of Portugal in 2013. The rider went 333 miles.

So if you’re not quite an adrenaline junkie and don’t feel like kiteboarding in hurricanes or setting new world records for speed or distance yet are still wishing to participate, what’s left?

Accomplished kiteboarders often say the sport is “relaxing,” though it looks anything but. Apparently once you’ve mastered the basics, kiteboarding need not be for only those superhuman athletic daredevils but for almost anybody with reasonable strength and who is in good health.

If you’ve seen stunt kites in the air along the beach, you’ll understand the basic principle of steering a kiteboard. With a set of lines left and right attached to the kite, you maneuver the large canopy by pulling either left or right, changing the kite’s direction, pulling the rider with it. Add a harness, very similar to what a trapeze artist might wear, slip your feet into the kiteboard, and you’re off skipping along the surface of the water with a remarkable amount of control. So much so that kiteboarders often plan one- to two-hour trips up the beach, from a set starting point to a set ending point, called “downwinding.”

“I go from the Point in Murrells Inlet (Garden City jetty) and ride to the Holiday Inn in Surfside Beach,” said Marvin. “That takes about two hours. It’s called a ‘downwinder.’ You go from Point A to Point B. You’re not fighting the wind. You just cruise. You see sharks every now and then, lots of jellyfish, sea turtles, dolphins. It’s very relaxing.”

Entry-level kiteboarding requires a fairly sober assessment of desire, costs and commitment. No one locally stocks kiteboard equipment, though Sail & Ski Connection will help you order gear and offers lessons, which are highly recommended. Used gear can be found online, but almost no one recommends going that route because of unknown wear and tear. Until you know what you’re buying, it’s best to yield to the experts.

During summer break from teaching high school classes, Marvin returns to Myrtle Beach to teach kiteboarding, a sport he’s been into since he was 15.

“My dad and I learned at the same time,” said Marvin. “My sister and brother-in-law also kiteboard and they’d been giving kiteboarding lessons in Cape Hatteras. So in 2005 we went up to Hatteras, learned how, and loved it.”

“At Sail & Ski we special-order equipment for people and help them buy the right size kite and board and get them equipped properly,” said Marvin, “and then we offer lessons. It generally requires six to ten hours of lessons, with a maximum of two people in each class. It’s a safety issue and we want to make sure you get your money’s worth. The introductory lesson is four hours and essentially we charge $100 per hour. So that first lesson is $400, and we get you from flying a trainer kite to starting to get up on the board. That teaches you the fundamentals of how to fly the kite, how the wind works, how to generate power, that kind of thing.

“The second lesson is two hours and that gets you to your first downwinder and where you can practice by yourself; all the safety stuff, how to get back on your board if you lose it, how to self-launch out in the water, and how to ride in both directions, right and left. Many people end it right there at six hours, but some come back for more training and private lessons; it just depends. Everybody’s different.”

Like all sports, kiteboarding requires a serious commitment to get good enough to feel comfortable and really start enjoying it.

“It takes a lot of effort when you first get into it,” said Marvin. “You’ve got to get out there, put in your time, take your punishment, but after a month you’ll feel like you’re Superman and you take off from there. Kiteboarding can be really safe—much more so now than when it first started—but you’ve got to know how to use the equipment or you can get into trouble. You can’t just take off and go. You’ve got to understand the systems, and that’s why lessons are so important.”
The self-taught are out there, and while many may have horror stories to retell, common sense keeps the sport relatively safe.

“We were wakeboarders first,” said Owings, “and treated the sport like that. We were sort of self-taught in kiteboarding. It wasn’t pretty. I saw one big dude on the beach; he had to have been 280 pounds. He didn’t respect the kite and it took him down the beach end over end.”

Marvin’s training and experience is designed to help beginners avoid those types of mishaps, and he truly enjoys passing along his knowledge to new converts. Ultimately though, he just loves kiteboarding.

“It’s the excitement and adrenaline of riding,” said Marvin, “but mostly, for me, it’s a great way to unwind. When I’m out there I can focus on just kiteboarding and forget about everything else. It’s actually relaxing.”

“Kiteboarding consumed my life the last couple of years of high school,” said Slear, “and then I went to the College of Charleston and found people down here went kiteboarding a lot. There’s a much larger scene down in Charleston. On Sullivan’s Island, on a good day, when it’s sunny on a Saturday or Sunday, and there’s a nice 15–20 mile per hour wind blowing, you might see 80 kites in the sky. In Hatteras you might see hundreds of kites in the sky.”