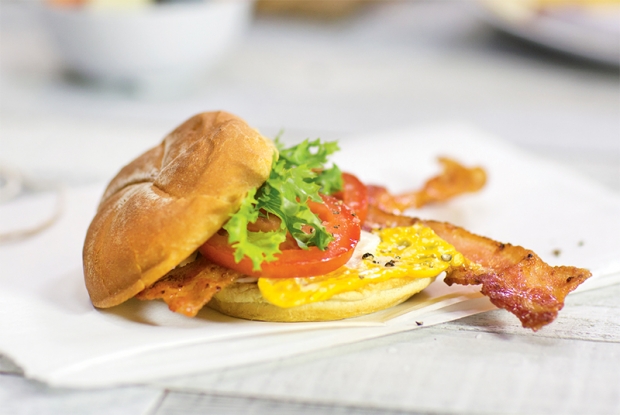 Since the age of six, Chris Skodras spent hours in his family’s restaurant being mentored by his grandfather and father. He eventually opened his own restaurant in 1986 after falling in love with Pawleys Island. Today multiple Eggs Up Grill locations span the Carolinas and Georgia, including nine spots here on the Grand Strand. Dig in to delicious breakfast options like the sweet potato pecan pancakes with creamy cinnamon syrup, bananas foster French toast and the red, white and blue waffle topped with strawberries, bananas and blueberries. Rounding out breakfast options are benedicts, sandwiches and omelets like the Patty-O-Sullivan with corned beef hash. The Loaded Home Fry Platters (like the Southwestern with cheddar cheese, onions, peppers, diced ham, jalapenos and salsa) are also favorites. There are also lunch options, including a variety of burgers, sandwiches, salads, soups and wraps. Eggs Up Grill is open daily from 6 a.m. to 2 p.m.

Born in Albania, “Evi” Spaho dreamed of coming to America and arrived at 18 with just the clothes on his back. He landed in Salisbury, North Carolina, where he poured tiles for a seafood restaurant. The owner liked Evi so much he promoted him to manager of his 350-chair restaurant, where he learned the ropes and thrived. He eventually became chef and manager of Blueberry’s Grill. The name is a nod to his mother’s special affinity for planting blueberry bushes, which were so tall young Evi could pluck the fruit from his bedroom window. Here he loves creating unique breakfasts and unexpected lunches and giving his customers the best dining experience he can. Breakfast favorites include the French beignets and crab cake benedict. Also offered are pancakes, waffles and French toast, like the cinnamon roll option that uses a sliced, battered and grilled cinnamon roll. The menu also has breakfast sandwiches, skillets and even a “Healthy Corner” section with offerings like steel cut oats and a kale omelet to keep you in check if you’re trying to eat lighter. A variety of salads and sandwiches are served for lunch. Open daily for breakfast and lunch, the spot is so popular that a second location opened at Barefoot Landing in August 2018.

Pancake houses abound along the Grand Strand, but with more than 30 years in business, Dino’s has staying power. Pancakes are just the beginning at this beloved spot, which serves up breakfast and lunch daily. The staff is friendly, the service is quick and the food is delicious. Pancakes play a big part of the menu and there are more options than you can imagine. Try the Hawaiian with pineapple and coconut, the blueberry with a choice of fresh berries or berries in glaze, or the pigs in a blanket (three sausage links wrapped in three buttermilk pancakes). If you’re craving something sweet, there is also French toast and waffles (like Georgia pecan and peach Belgian). Breakfast sandwiches, eggs and a variety of omelets (from corned beef hash and cheese to vegetarian to seafood) are on the menu. Dino’s also offers breakfast specials like salmon benedict and country-fried steak with sausage gravy.

The Famous Toastery franchise began in Huntersville, North Carolina, in 2005 when the fresh-made breakfasts and fun atmosphere grew the concept. The Carolina Forest location opened in September 2016 to rave reviews and continues to be a breakfast (and lunch) favorite. Owner Tim McGinnis, former local anchorman and current South Carolina House of Representatives member for the 56th District, visited a location in another city and brought the concept to the Grand Strand. Food is made to order from scratch, and you can tell. The “Good Morning” side of the menu (lunch is “Good Afternoon”) includes breakfast sandwiches and burritos, benedicts, pancakes, waffles, French toast, omelets and more. The corned beef hash is a favorite, served with shredded potatoes, two eggs and house-made hollandaise. Other standouts include the stuffed French toast (your choice of raspberry, blueberry, peanut butter and banana or strawberry and cream cheese) and the avocado omelet filled with avocado, tomato, bacon and parmesan. Don’t skip the specialty coffees (or mimosas if the mood strikes). Famous Toastery is open daily from 7 a.m. to 3 p.m.

Johnny D’s has been in food service for more than 36 years, but mainly in the New York area. When they brought their delicious eatery to the beach, it was a recipe for success. Striving for the best possible food and service, the restaurant recently opened a second location in North Myrtle Beach. Johnny D’s is the perfect breakfast spot, with creations by chef and part owner Jamie Saunders. Her red velvet waffles gained national recognition, snagging the title of best in the state from Food Network. Options include a variety of something for your sweet tooth, from the churro French toast to the banana pecan pancakes to the famed red velvet waffle. There are also a variety of skillet options, like the Irish Skillet with homemade corned beef hash over home fries with cheddar jack cheese, eggs over easy and hollandaise sauce. Benedicts (like the pork belly) and omelets (like chicken fajita, salmon and mushroom and Swiss) round out the breakfast menu. The restaurants also serve a great lunch and are open daily from 6:30 a.m. to 2 p.m. 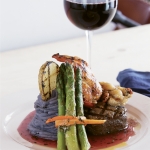 Best Restaurants of the Grand Strand 2018