Since the moment Mandi and Michael first met, there was a connection that would turn into the greatest celebration of love 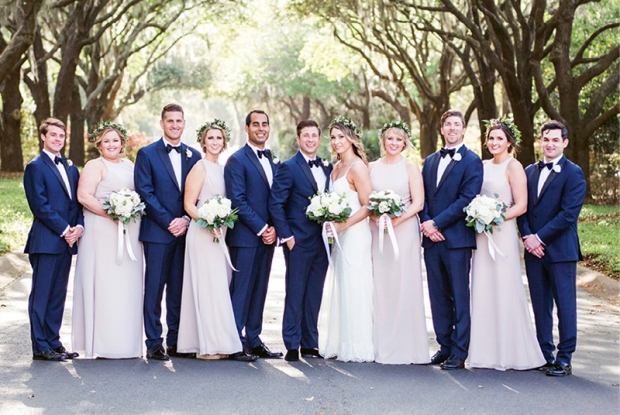 For Mandi and Michael Fink, the right chemistry was sparked through the attraction of opposites. Or, as Mandi describes it, Michael’s energy, which was very different from her own.

“He was always going!” she says. “I’m not an introvert, but he never meets a stranger and he just loves life. The positivity he has reminds me of my dad.”

The two met at a work event in April 2013, with Mandi in advertising and Michael employed at the time with a hospice. After the conference’s last meeting, Michael asked her out on a date and five years later, on April 14, 2018, to be exact, they walked down the aisle.

The couple dated a little more than three years before Michael proposed in December 2016 in Cancun. His positive, confident energy prevailed once again, as he convinced the all-inclusive resort where they were staying that it was their anniversary so that they could book a private dinner on the pier overlooking the tropical waters, complete with an elegant chandelier hanging overhead.

“Once the champagne was poured, Michael got down on one knee and proposed with the most heartfelt, beautiful words,” says Mandi. “From there, we enjoyed an amazing dinner and celebrated the rest of the week!”

She couldn’t wait to start planning the celebration that would begin the rest of their lives. Mandi’s theme was elegant bohemian, with a marriage of greenery, white garden roses and gold throughout the outdoor ceremony at DeBordieu Club in Georgetown, which was followed by an indoor reception.

“I’m very buttoned up normally for work every day, so I wanted to wear a crown of flowers and a pearl bracelet with my romantic dress,” says Mandi.

She decided on a whimsical Essence of Australia dress from a shop in Charleston that featured a lace over Imperial crepe sheath, lace train, a scalloped lace hem and a low back that cinched into a central line of buttons.

“I tried on about eight dresses and this one was the second or third one that I kept coming back to,” says Mandi, “but it’s not typically me, so I was afraid. The lace that was scalloped at the back, I just fell in love with. And I wore a flower crown as a nod to my mom, who also wore one on her wedding day.”

Her bridesmaids were also crowned with the pretty flower wreaths, walking down the aisle that overlooked the salt marsh and live oaks to “A Whole New World,” which was played by a violinist and cellist with Palmetto Strings.

“I really wanted to make sure this was an event that captured both he and I,” says Mandi. “It’s not just a party for everybody. This is our wedding day, and it was reminiscent of us.”

Inside, the reception that followed was a glorious celebration of the newlyweds, with greenery, gold plate chargers and white pillar candles placed atop the dinner tables. Lowcountry-themed hors d’oeuvres were served at cocktail hour, including fried green tomatoes with smoky bacon marmalade and shrimp tacos stuffed with jalapeno-cilantro slaw.

Dinner service was a delicious gourmet offering of DeBordieu Caesar salad, a choice of the grilled steakhouse tenderloin, herb roasted fingerling potatoes, creamed spinach and pommery demiglace or the roasted chicken with parmesan risotto, baby spinach and natural jus. And, for dessert, an indulgent three-layer wedding cake gifted to the Finks from the Whitleys, who previously owned Crady’s in Conway where Michael worked during his high school years. Party favors were each of the couple’s favorite candy: hers, Sour Patch Kids and his, trail mix.

Before the newlyweds departed into the night in a classic 1948 Packard, Mandi says her highlight of the wedding occurred.

“For our last song, Michael asked Stephen with Darby Events to ‘play anything Whitney Houston,’ and Stephen chose ‘I Will Always Love You,’” says Mandi. “So everyone moved off the dance floor and we danced, while Michael serenaded me—even getting down on one knee as everyone cheered us on. It was the moment that really capped off a perfect night of so much love and joy that we felt between us and felt from our family and friends.”

What does Mandi advise so other brides can pull off a successful wedding celebration?

“I would say take a moment and remember what it is that you and your husband want and stay true to that,” she says. “And hire people that you can trust to do their job and let them do their job. It’s just like my line of work in advertising: I want my clients to trust me.”

Mandi grew up in Cary, N.C., and later moved to Sunset Beach, N.C., with her parents. Michael was born and raised in Conway. Shortly after the couple was married, however, they relocated to Winston-Salem, N.C., after Michael received a promotion as executive director of a retirement community. 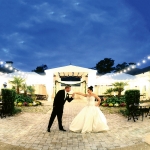 Love on the Range 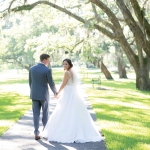 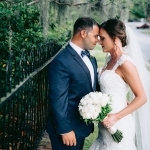 Love in the Lowcountry

Katy and Kurt were inspired to have their own Gone with the Wind wedding
GENERAL TAGS:
events / favors / dresses / Conway / Georgetown / tacos