Along the Kings Highway 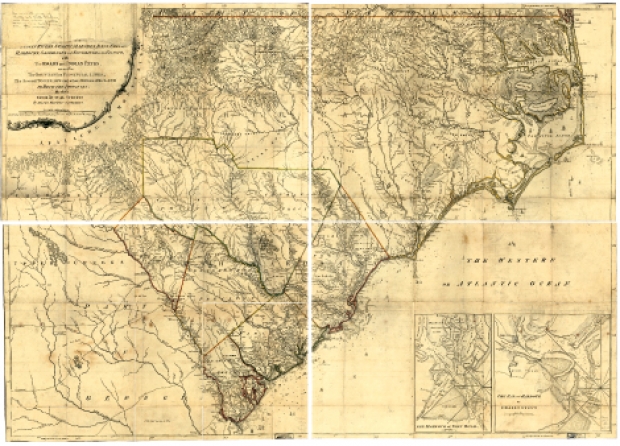 Today’s U.S. Highway 17 is a bustling thoroughfare dotted with restaurants, hotels, businesses and shops. It’s hard to imagine that this glittering artery traversing the Grand Strand is actually an historic road dating back centuries. Kings Highway is one of the oldest extended travel routes in the U.S. Three hundred years ago, the section of the highway that cut through the Grand Strand was considered one of the most difficult stretches of the road to travel because riders and carriages faced obstacles of sandy dunes, scrub brush and swamps.

The brave souls who chose to settle this inhospitable land were a hearty bunch. They had to be. And many of their descendents have chosen to stay in the Grand Strand area that their ancestors helped shape. Longtime residents will recognize names like Vereen, Lewis and Bellamy. Those names are engraved on one of the earliest maps of the region and are noted alongside geographical markers like creeks, marshes and swashes. The massive map called “An Accurate Map of North and South Carolina with Their Indian Frontiers,” which was drawn in 1779 by cartographer Henry Mouzon from nearby Kingstree, S.C., is considered the touchstone for locating the lands of all of the very early settlers of the Carolinas. The Grand Strand region clearly shows who had put down their stakes.

Back then, the area was known as Long Bay and in no way resembled the tourism mecca it is today. There was little to entice settlers to come here, and until the mid-1800s this was one of South Carolina’s least populated regions. What is now Highway 17 was an unpaved, sandy and often indefinable course connecting Boston and Charleston. While most travelers of the day found it easier to make the journey by sea, trips by land were a necessity in some cases. Following what had largely been a path laid out by Native Americans, the route was completed by 1735. Stage coaches began making the 1,300-mile trek by 1750.

A few brave souls saw potential in the rugged frontier and dared to carve out their future, and ultimately ours, in the district. With a lot of land available and few takers, most found themselves in possession of large properties, properties that were later subdivided among their children.

By the time Kings Highway was paved in 1940, the Grand Strand was well into its transformation from an inhospitable territory to one of the nation’s top tourist destinations. It would take a full book to recognize all of the families that deserve a mention for their contributions toward that development, but here are just a few.

The Vereen Family
Vareen was one of the dominant names in the early days of the Grand Strand. The Vareen family was French Huguenot and the spelling of their name evolved from Varin to Vareen and eventually Vereen. Jeremiah Vareen was the first of his family to settle in what is now Horry County. He moved from his father’s plantation near the Georgetown-Williamsburg County lines, putting down roots in an area near Little River that had been inherited by his wife Mary. Jeremiah was also related to Peter Horry, for whom the county was later named.

When George Washington made his journey along the Kings Highway in 1791, it was Jeremiah’s son (also named Jeremiah) who hosted the President overnight when he arrived in South Carolina and helped guide him safely through the region. The elder of Vareen’s brothers settled in the area near Socastee, as well as Yauhanna. All were involved in the Revolutionary War, many fighting under General Francis Marion.

The 114-acre Vereen Historical Memorial Garden is located on some of the original family lands near Little River. Vereen descendents continue to make their mark in business and civic activities throughout the Grand Strand. Notables with this name include Vereen’s Marina in North Myrtle Beach and Arthur Vereen Construction.

The Bellamy Family
A neighbor of the Vareens was Dr. John Bellamy (spelled Bellimy on the Mouzon map) who moved to the Grand Strand from North Carolina. Bellamy first came to the area in 1765 with a land stake of 300 acres on Buck Creek off the Waccamaw River that straddled the North and South Carolina line. A house built by his grandson, William Addleton Bellamy, stood near what is now Highway 9, six miles north of Kings Highway until the 1960s. The Bellamys, like the Vereens, farmed, growing rice, timber and some indigo.

These days, farming remains in the blood of some Bellamys. Indigo Farms located just across the border into Calabash, N.C., is on part of the original Bellamy property and is owned by some of John’s direct descendents. Howell “Skeets” Bellamy of the Bellamy Law Firm descends from this early group, as does the former chairman of the Horry County Republican Committee, Johnnie Bellamy.

The Lewis Family
The Lewis family was part of a large contingent of Scots who moved into both Marion and Horry counties. William Lewis originally settled in the area that is now Gallivants Ferry in the late 1700s, also fighting for General Marion in the 2nd South Carolina Regiment. Raising eleven children in the area, the map is dotted with the Lewis name on both sides of the Kings Highway. The Lewis lands along the shoreline stretched from what is now known as Singleton Swash at Lake Arrowhead (across from the Dunes Club golf course) and up into Windy Hill.

The almost 10,000-acre Lewis Ocean Bay Heritage Preserve, just north of Kings Highway on Highway 90, is considered one of Horry County’s most unusual preserves, with 23 ocean bays and a host of wildlife, including black bear and bald eagles.

The Hardee Family
In the 1850s, Hardee or Hardy was second only to Smith in the names listed on the census for Horry County. Land records show the first Hardee to stake a claim was Andrew Hardee in 1787, with more Hardees showing up in rapid succession.

Hardee’s Ferry Road in Conway is named for the family that has subtly influenced almost every aspect of the Grand Strand. Among the many things they are known for, the Hardees were one of the founding families of Myrtle Beach’s First Baptist Church.

Lesta Sue Hardee of the Chapin Memorial Library descends from William Hardee, who came to Horry in 1800. She has become a de facto historian for Myrtle Beach and has begun a series of talks that tap into the memories of long-time residents. As an avid genealogist, Hardee says she has hundreds of Hardee cousins in the Grand Strand area, and the annual Hardee reunion draws more than 100 participants.

The Springs Family
From the mid-1900s until his retirement in 1988, Dr. Holmes B. Springs was one of Myrtle Beach’s most respected physicians. He helped open the city’s first hospital, Ocean View Memorial, in 1958, and was later a force behind the opening of what is now Grand Strand Regional Medical Center. Springs’ father was Colonel Holmes Buck Springs, a hero of World War I and a descendant of the founders of Bucksport, near Conway.

Grandfather Henry Buck moved to the Kingston Township (now Conway) in 1832 to be a part of the growing timber industry. He built two large mills in the area and owned more than 10,000 acres of land. Buck also started a successful shipbuilding business to help him transport his timber to places as far away as South America. In the mid-1800s, he was the wealthiest man in the sparsely populated region.

Members of the Springs family remain active throughout the community and are involved in everything from banking to real estate ventures.

The Burgess and Patrick Families
Straddling Kings Highway near what is now Brookgreen Gardens was the community of Burgess. Founded by William Burgess in the mid-1800s, in those days it included a 25-square mile community. One of its first postmasters was Isaac Patrick, who married Georgia Burgess as his first wife. Known to all as “Cousin Isaac,” Patrick was a land speculator and a successful one at that. Isaac and Georgia’s daughter, Elizabeth, married Edgar Vereen and had one child. After his death, she married into another prominent Horry family, the Marlows. Elizabeth Patrick Vereen Marlow lived in Murrells Inlet until her death at 89 in 1980. Present day Burgess is on Route 707, just west of Kings Highway.

While there are numerous Grand Strand residents connected to the Patricks, probably none is currently more recognized than Cecil Patrick, owner of Patrick Mobile Home Park, better known as Myrtle Manor of the TLC cable television channel.

Many of the descendents of the Grand Strand’s first pioneers have cross-pollinated in such a way that one person today may be able to trace their lines back to all of the original families. Their ancestors were people with vision and drive, welcoming others to the area and paving the way for the Grand Strand to become what it is today.

PHOTOGRAPHS COURTESY OF WAYNE AIKEN AND BY ADAM EMERICK

PHOTOGRAPHS BY MAC KILDUFF AND COURTESY OF BELLAMY MANSION

PHOTOGRAPHS BY (BROKDREEN) MAC KILDUFF AND COURTESY OF WIKIPEDIA