Want to take a cruise out of Charleston? Climb aboard with us as we get an insider’s look at the Carnival Fantasy cruise to the Bahamas. 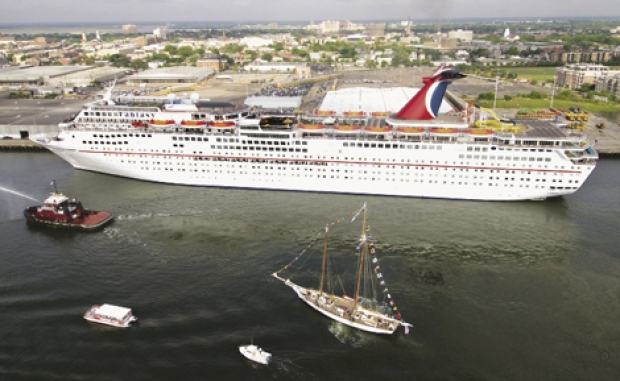 It’s 9:30 p.m. and pitch black on the Atlantic. Below deck, pop music blasts in the corridor beside the casino and 150 passengers brandish finger-pointed rifles, bouncing their arms as they sing in unison “Who you gonna call? Ghostbusters!”  It’s Tuesday night music trivia onboard the Carnival Fantasy.

Fantasy takes about 2,000 passengers and 920 crewmembers out of Charleston every week for a five-night adventure to Freeport and Nassau in the Bahamas. From the moment the ship sails, the crew presents informative seminars, safety briefings, art auctions, games, gambling, sporting events, Las Vegas-style shows, comedians, karaoke, dancing contests and the oh-so-famous hairy chest contest. There’s food on two decks, which comes in every conceivable manner—from fresh deli creations to buffets to formal dining. And don’t forget the drinks. Bars are located in every possible corner of the ship and constantly roving bartenders brandish freshly made drinks on a tray. Welcome to vacation at sea.

Fantasy leaves Charleston on Thursday afternoon and plies the water until Saturday morning, when it pulls into Freeport. Passengers explore Freeport for the day before returning around dinnertime, when the ship pulls out to head for Nassau. The next morning, it’s all-ashore for exploration of Nassau. Again at dinnertime, the ship pulls out for the return trip, arriving in Charleston on Tuesday at  about 8 a.m. Clearing Customs and Immigration takes a couple of hours.

There is so much to do aboard ship, it’s nothing short of mind-boggling. The daily schedule is delivered to each stateroom the evening before. The ship’s television station continuously runs video from the current cruise and information on upcoming activities.

Despite the ship’s impressive size, orientation is fairly easy and is aided by crew members as passengers embark. A detailed deck plan is posted on every floor, as well as in handout format at the Guest Services desk.

With the port only a couple of hours from the Grand Strand, cruising from Charleston is a very convenient and affordable experience. Parking is available at the port for $17 per day and is free to vehicles displaying a handicap sticker.

Everyone’s favorite cruise experience is different, but for the November 8 departure, Edna Blair’s favorite experience was driving on the wrong/left side of the road during a Jeep tour of Nassau. Edna is from Calabash, North Carolina.

Sandy and Vince Collette of Wilmington, North Carolina, loved the Chef’s Table, an intimate evening of private dining for themselves and eight friends specially prepared by one of the ship’s chefs and paired with fine wines.
Pam and Greg Brown, also from Wilmington, were onboard with three other couples who took advantage of the ship’s many lounges to play board games and spend quality time together.

Jim and Judy Hough of Charleston played Blackjack every night of the cruise and were very impressed with the friendliness and professionalism of the ship’s casino employees. “The dealers were very good and the pit bosses were excellent,” Judy said.

Among the several large groups of family reunions, friends, and associates was the Southeastern section of the Marine Corps League, celebrating the Corps’ 237th birthday with a traditional cake cutting ceremony. The oldest Marine (90+ years) passes the first piece of cake to the youngest Marine (a 17-year-old recruit). Vince Johnson and David Spangler of the Marine Corps League were impressed with the ship’s ability to accommodate their 48-member group, which has already decided to do a cruise again next year. They warranted not only special attention from the captain, but a gratis cocktail party onboard. How’s that for service?

According to Guest Services Director Inder Jolly, the apparent favorite excursion from the ship is to Atlantis on Paradise Island near Nassau. Atlantis is so popular that it’s often difficult to get in without a reservation. The enormous resort complex includes a hotel, world-class aquarium, waterpark, restaurants, beach front areas and much more. The next favorite tours are power catamaran snorkeling excursions and swimming with dolphins. Options are all listed online so passengers can study and book them before departing.

Online reviews also recommend the Freeport island tour narrated by native Dwaine. His knowledge of the island’s history is impressive. “He took us to places and told us about things only the locals could know,” said Blair. Stops included a back road where fishermen discard conch shells, which the nine passengers in his van were eager to collect as souvenirs.

Prior to each landing, shopping fans get help on the best deals ashore with a seminar from the onboard shopping expert. Illustrated maps of each stop point out the best shops for jewelry, leather, designer labels and more.
If you’d rather just stay onboard the ship, the spa is open with special prices while in port. Many of the ship’s shops, such as the liquor store and the casino, are closed when in port. The swimming pool and the hot tubs are open, as are the fitness center near the spa, the putt-putt golf course, and the jogging track on the top deck.

While underway and at night, there’s almost always a game or dance event on the Lido deck near the swimming pool. That’s where Carnival’s hairy chest contest is staged. You don’t have to be particularly hairy to enter, but you’d better not be shy. Contestants strut their stuff to music in front of four female judges and hundreds of passengers who line the deck for the event. Invariably, the best dance moves help secure a win.

Cruising on the Fantasy may be the least stressful five-day adventure around. And if five days isn’t enough, Carnival also has six and seven night cruises out of Charleston year-round.