Peter Gossamer’s art of illusion on display at Palace Theatre 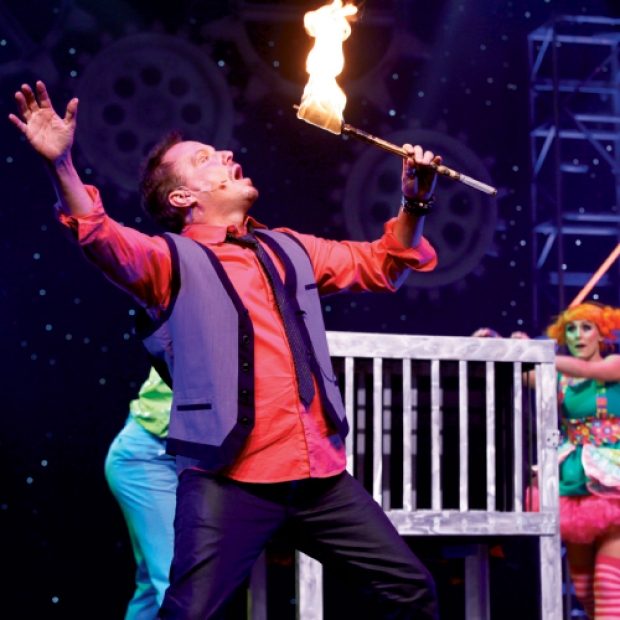 As host of the Palace Theatre’s Illusions of Magic, Peter Gossamer onstage is larger than life: he produces a woman out of a ball of fire; he disappears and reappears inside a chained box; he makes a motorcycle fly. Indeed, Gossamer the performer seems graciously endowed with supernatural capabilities. However, Gossamer the man is anything but tricky. This illusionist who has traveled the world wowing audiences is, in reality, a guy from Ohio who found his passion early, fell hard for the art and spent years practicing and perfecting it.  Gossamer—both the magician and the man—is simply, authentically and profoundly grateful for the ride.

Gossamer explains that he was initially drawn to magic because it grounded him, providing the 14-year-old with confidence and a unique identity. “When I started to do magic, I became ‘that magic kid,’” he says. “It helped me with identification and self-esteem. Once you learn magic, you can fool your friends or even your parents. It’s such a great boost when your Dad says, ‘How’d you do that?’ Magic is very easy to learn, and immediately you seem like you have super powers.”

Yet unlike many entertainers, Gossamer omits much of the swagger and arrogance from his onstage persona, substituting candor and wit. “I win over audiences because I look like the guy next door,” Gossamer notes. “I think that by just being a little bit self-deprecating as well—I’ll make jokes that make me look kind of goofy or human—that’s what wins them over.”

This “regular guy” routine, however, doesn’t diminish the quality of his art. Gossamer’s ascent in the world of prestidigitation (French, “performed with quick fingers”) was sure and steady, and his resume reads like an international travelogue. After earning a BA in marketing from Kent State University and a certificate from Chavez College of Magic in Los Angeles, Gossamer earned his professional credibility in the cruise ship industry. He lived on Carnival ships for five years, perfecting his act and, later, blurring the lines of performer and administrator as he moved into the role of cruise director.

In his next incantation, the following decade Gossamer moved through the party-and-festival circuit of magic to a steady schedule of gigs at casinos and resorts in Atlantic City, Las Vegas and Miami. He’s elicited gasps of disbelief in Seoul, Montreal, Tokyo and Guam and made appearances on the television programs World’s Greatest Magic and Regis and Kathie Lee. Along the way, he crossed paths with dancer Carol, who would become his assistant and, eventually, his wife.
It’s Carol who is sliced, diced, divided, separated and levitated throughout the Illusions of Magic show, but she’s also a central focus of fantastic dance numbers and the other half of the charisma that drives the production.

“We bring to the table our personalities,” says Peter of their team. “I think that’s our number one asset. Anyone can go out and buy a bunch of boxes and stand next to them, but she’s a great dancer and I’m a great host.”

Bill Herz, president of Magicorps Productions and a colleague of the Gossamers, has personally experienced the alliance that the pair garners onstage. “Peter is a really great magician as well as having a charming personality on stage that the audience connects with immediately,” he offers. “What really makes Peter and Carol different is they see themselves as entertainers who happen to be great magicians. Also, unlike other magicians, they don’t take themselves seriously.”

The Gossamers first arrived in Myrtle Beach last June and performed the majority of the 2013 season at the Palace Theatre, finishing up in late September. After spending a few months at their home in New Jersey, they returned in March to kick off this season’s program, which is even “bigger, better and faster” than last year’s, says Peter.

This year’s performance centers on Gossamer and his magic, but is also infused with dance numbers and ancillary acts, including tigers and a human cannonball. “Last year, in the time that they started with maybe one illusion, we’re doing five. In the first three minutes, you’re going to see $30,000 worth of magic,” Peter explains. “And the uniqueness of the variety acts are amazing,” adds Carol. “The show’s size, its scope—it’s like a three-hour show squeezed into two hours.”

As for Myrtle Beach, the Gossamers agree that the location and venue far exceed the performers’ expectations. “I’ve been fortunate enough to travel everywhere, and I’ve never been in a room that’s more gratifying than this venue,” Carol notes. From the audience to the production company to the technical crew and other performers, she explains, “The show is larger than us. We feel honored to be a part of it.”

Photographs courtesy of the Palace Theatre and Peter Gossamer