Before there was Myrtle Beach, there was North Island 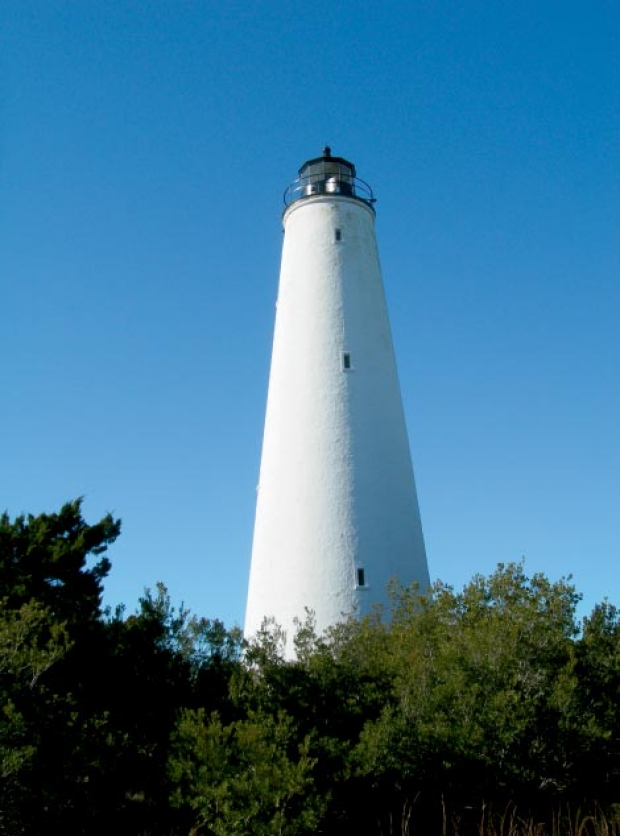 Long before Myrtle Beach had a hotel, streets or even a name, the Carolina coast did have a resort destination that provided solace from the summer heat for South Carolina residents and visitors alike. That place was North Island, which sits roughly 12 miles from Georgetown where Winyah Bay meets the Atlantic Ocean. In addition to its service as a resort area dating from the 18th century, it came close to being the first Spanish settlement in the New World, it was the site of arguably the greatest engineering marvel in South Carolina’s history at the time, and it also served as a base for American soldiers through at least five wars. Yet despite its colorful past, today the seven-mile-long island sits uninhabited, reclaimed by nature, and home to only a few decaying buildings and a 200-year-old lighthouse that hasn’t had a keeper in decades. Of the island’s historical significance there can be no question; mile for mile it is one of the most historic areas in the state.

North Island’s first brush with fame came when the Spanish were exploring the Americas, and Lucas Vazquez de Ayllon’s flagship Capitana was one of a fleet of ships looking for a place to establish a settlement in the New World. When exploring the Winyah Bay area in 1526, the Capitana grounded on North Island, and perhaps fearing that the treacherous water surrounding the island would pose too many navigational hazards, the Spaniards turned their attention to Florida instead. Eventually the British settled in the area however, and by the late 18th century colonial planters had learned that summers spent on the island were preferable to the stifling heat inland, and many of them built second homes there in a resort community known as La Grange. Hundreds of people lived there during the summer months, and one night in June 1777 resident Major Benjamin Huger answered his door to find two weary men who had just landed after a 54-day voyage from France. The men—the soon-to-be-famous Marquis de Lafayette and Baron De Kalb—stayed with Major Huger at his North Island home before moving on to eventually join George Washington’s army. Due to Lafayette’s subsequent fame, today historical markers on U.S. 17 point to the island as the site of Lafayette’s arrival in America.

By the late 18th century it was obvious that the island needed a lighthouse to guide shipping traffic entering Winyah Bay. A tract of land was donated in 1789, and with a Federal appropriation the lighthouse was begun in 1799 and finished in 1801. This 72-foot-tall octagonal structure was built of cypress and burned whale oil to light its lamp, and with this navigational aid in place area residents next conceived of a plan to cut a canal across North Island that would allow ships to bypass the navigational hazards at the mouth of the bay. John Drayton’s 1802 work A View of South Carolina, as Respects Her Natural and Civil Concerns mentions the plan for the “highly advantageous canal,” and notes that its construction would mean that the approach to Georgetown “will be attended with greater safety, and its commerce be much increased by admitting vessels of heavier burden than those which can penetrate the channel between North and South Islands.”

An engineering marvel at the time, the project entailed cutting a canal from a point north of the lighthouse and running east to west from the ocean on the other side of North Island.

Unfortunately, after the canal was opened to the ocean, storm tides filled in at least one-third of it with sand from the seabed. Faced with the obvious conclusion that such occurrences would beset the canal again and again the ambitious project proved impractical and was never recommenced. Even today satellite images of the island clearly show at least a half-mile of the outline of the canal that was completed before being abandoned.

It wasn’t just the canal that storms destroyed. The lighthouse fell victim to a hurricane in 1806 as well. In 1807 a new stone lighthouse was started, and by 1811 this sturdier lighthouse that burned whale oil and required a full-time lighthouse keeper was completed and stands as the basis of the lighthouse on the island today. This would thereafter serve as the island’s focal point both in war and in peace. During the War of 1812, American troops were posted near the lighthouse, and although British warships were responsible for several wrecks on the island, no military operations of note took place there.

Although the war hadn’t had an effect on the island, nature was another matter, and during the 19th century storms would play a significant role in the construction and reconstruction of the dwellings on the island, just as they had with the proposed canal.

By 1820, North Island had become a relaxation retreat and was, in fact, the area’s first resort—more than a century before Myrtle Beach was even conceived. Increasingly, wealthy rice planters were building vacation homes on the island, and a village consisting of a church and more than 100 houses called Lafayette Village was flourishing on the island. Drawings made in 1820 for Mill’s Atlas, published in 1825, show the village and church, as well as a number of plantation homes around the island’s circumference.

But the idyllic conditions on the island would not last long. A hurricane in 1820 caused the tide to rise four feet above normal, resulting in substantial damage to structures on the island, and a hurricane in September 1822 destroyed many of the homes and tides rose so high that there were as many as 125 drownings on North Island alone—perhaps as many as 300 people died overall. Despite the devastation, some of the habitations were rebuilt again, and by 1825 there was also a school on the island.

Robert Mills wrote in 1826 that as many as 600 or 700 people were on the island during the summer. Another major hurricane in September 1834 was so powerful that it wrecked at least five ships in the area, and hurricanes in 1846 and 1854 were also devastating. As a result, as a 1905 article in the Carolina Field noted, even though the island was a “natural resort” and once “the site of two populous summer villages,” “storms of unusual severity caused such havoc that people in the habit of visiting North Island became frightened and moved away.” Indeed, with each storm there was less rebuilding, and further complicating matters was that the island was practically inaccessible other than by boat. By the mid-19th century when the Civil War broke out, most people had given up on the idea of establishing a permanent community on the island.

By the time the war was over, what remained of the lighthouse was a burned shell that had to be rebuilt in 1867. This is essentially the structure that exists today, which is 87 feet tall with a base diameter of 20 feet and walls six inches thick.

After the war and hurricanes in 1881, 1885, 1893 and 1903, it was obvious that the island was impractical as the setting for a permanent community, although using the island as a site for leisure activities was a safe enough prospect. A pavilion was built on the island where dances were held almost weekly during the summer, prompting frequent reports around the turn of the century such as one in The Georgetown Semi-Weekly Times that noted in 1899 that “a most charming dance was given at North Island on Monday night.” Increasingly, the island was a destination for day or night trips featuring beachcombing and dances, so much so that not long after The Georgetown Daily Item noted in 1910 that the steamship Comanche had been purchased by the Waccamaw Transportation Company, ads appeared in the paper advertising excursions to North Island on the Comanche every Sunday at a cost of 25 cents round trip.

Beginning with the onset of World War I, a military presence was frequently on the island. The navy established a radio station there, and they eventually took over the island to the extent that a 1921 military drawing of the area shows the dance pavilion designated now simply as a “shed.” Throughout the 20th century photographs show barracks, stables, boathouses, additional piers, and all manner of structures that were built and destroyed by man and nature. Eventually the families of the lighthouse keepers gave way to the Coast Guard, who in turn finally abandoned their post there by automating the lighthouse in 1986.

In the late ’80s the Department of Juvenile Justice established a marine rehabilitation program for juvenile offenders on the island, but the program was eventually discontinued in the 1990s. Even those last-built facilities near the lighthouse have rapidly deteriorated; no more homes, picket fences, stables or pavilions stand, only a single pier and a handful of dilapidated late 20th century buildings sit isolated and abandoned; in all likelihood, wind and tide will cause them to disappear soon as well.

The rest of the island will never again be developed. Boston Red Sox owner Tom Yawkey’s family bought the island except for the lighthouse compound in 1911, and upon Yawkey’s death the land was willed to the South Carolina Department of Natural Resources. While this has kept the land from being developed, it also means that it is largely off-limits to the public. Today the island is lush and overgrown with vegetation, but everywhere there are minute reminders of man’s former presence, even though the island is devoid of human life today. As a result, it is a peaceful place that offers a marked contrast to the bustle of the rest of the Grand Strand, and there is little to remind us that before there was a Myrtle Beach, North Island was the premier resort area along the upper South Carolina coast.