A Sunnyside Stroll Back in Time 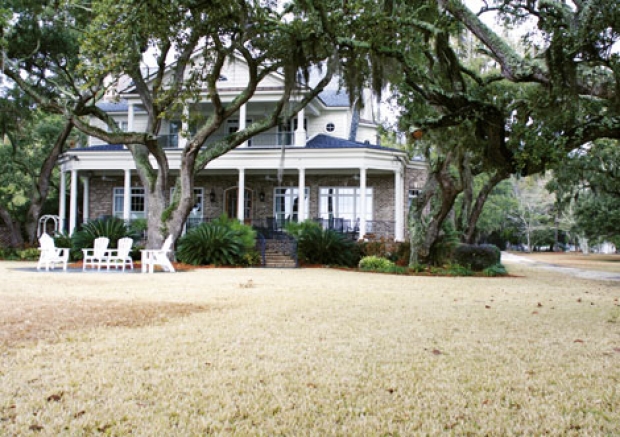 Right off the main drag of Murrells Inlet, a quiet road rambles its way to the water’s edge, the gateway to a point of land that by orientation basks in the sun all day long and gives life to groves of aged live oaks, a coveted place to summer since the time of antebellum plantations.

It is known simply and aptly as “Sunnyside,” a geographic jewel, steeped in history, legend and the kind of passion that only a summer love can invoke.

Like its southern cousin Pawleys Island, Sunnyside was developed by wealthy rice planters in the 1800s to escape the suffocating heat and swarms of malaria-carrying mosquitoes that summer brought to their working plantations along the Waccamaw River. And until the end of World War I, the cottage coven of Sunnyside was made up of about 15 cabin-like homes, stretching from Rum Gully Creek to the present site of Flo’s Place restaurant.

To this day, Sunnyside residents respect “creekside strolling rights” written into the original property deeds, a provision that allows for public promenade along the waterside, across privately owned land. A creekside stroll is a taproot-deep tradition here, and has been practiced through the ages by the notable and notorious alike.

The ravages of fire, hurricanes and floods demolished most of the original structures of Sunnyside, but the memories and folklore live on forever. As you will see, the chronicles of just four of Sunnyside’s earliest residences could rival even a best-selling suspense novel.

The Granddaddy of Them All
According to a plat from 1800 and a map designating “Sunnyside-on-Murrells Inlet, A Seashore Residence,” it is most likely that the first summer place was built by Governor Joseph Alston for his ill-fated bride, Theodosia Burr, who boarded the schooner Patriot in 1812, both of which vanished somewhere off the Outer Banks. She was never seen or heard from again.

But Theodosia Burr would not be the last woman associated with the “Sunnyside” cottage home to lose her life under strange circumstances.

In the early 1900s the Bigham family of old Marion County was known far and wide for their brutality and abuse of power and money. Patriarch Leonard “Smiley” Bigham II was particularly feared by family servants, especially when he took the life of a young boy by driving a nail through his ear. Smiley was indicted for this offense and trial was set for October 1909.

Kin to the Bighams, Henry Gilmore Smith, purchased Sunnyside in 1909 to retire to and his Marion relatives became regular visitors.

One month before Smiley’s trial, his son, Dr. G. Cleveland Bigham, and Cleveland’s wife, Ruth, were staying at Sunnyside. While Cleveland and his friend William Avant were boating offshore, Ruth Bigham took to her early evening “sunnyside stroll” at dusk.

Ruth, like all fashionable ladies of the time, wore long flowing white or pastel dresses. She had been summoned to testify at the Smiley hearing in a month’s time and the Bigham clan hardly trusted one another, let alone anyone outside their immediate gene pool.

By the time she got to the shoreline of the Sunnyside property, Cleveland had convinced William Avant that the figure in the gloom was a ghost and that Avant should shoot at it. He did. Ruth Bigham died on the spot.

As it turned out, Smiley never went to trial, dying of mysterious means that, townsfolk whispered, “looked like poisoning.” Dr. Bigham and Avant were found guilty of manslaughter and sentenced to three years. A judge let Cleveland free on bond pending an appeal. He slipped out of the state and never served another day of his sentence.

The Bigham bloodline and reign of terror would come to an end in 1921 when Edmund Bigham was the only family member left alive after a mass shooting at their Pamplico estate that took the lives of his mother, brother, sister and his sister’s two children. To his death, Edmund maintained that his brother Smiley III had murdered the family and then shot himself. But who could trust the word of a man who skirted military draft by laying his hand on a railroad track and letting a moving train sever it from his arm?

The state of South Carolina tried Edmund three times during the 1920s for the family massacre. It was the most sensational, courthouse-packed trial to be witnessed in the county seat of Conway with Edmund publicly placing a curse on all those “who have lied on me.” Four witnesses would die during the Edmund Bigham trials and he indeed outlived the prosecutors and jurors. Serving a life sentence, Edmund got paroled in 1960 and lived his last two years in Marion.

Over time, so many people from Marion came to own the Sunnyside cottages that the area was nicknamed “Little Marion.” At that time, it was a straight pathway from the inland town to the inlet, except for a short ferry jaunt at Socastee.

Private Hunting and Fishing Club for Power Brokers
From notorious to the notable, “Buckeye” was built in the early 1900s by the Wilcox brothers, also from Marion, but eventually became a hunting and fishing club for Dr. Lon McMillan of Mullins and a host of prominent South Carolina power brokers including Gov. Ransom Williams, John Dixon, T. Lide Smith, E.T. McMillan and J.S. Neal.

Buckeye was ravaged by fire and later by Hurricane Hugo. Current owners Joy and Joe Pinson built a green-inspired, energy-efficient Buckeye III and Joy has devoted her life to the health and welfare of the inlet as the founding president of Winyah Rivers Foundations and Waccamaw Riverkeeper.

“Sunnyside is the most gorgeous Southern setting with natural charm,” says Joy. “We’re not a highly polluted river with problems, but our river needs care and understanding. Prevention is the key. People forget that this area along with Pawleys Island started the whole Grand Strand resort industry. If our Waccamaw River goes down the drain in any way, no one in any hotel around here will be able to take a shower.”

Bullets & Books
The original camp-like “Pretend” was named by its second lady of the cottage, Julia Mood Peterkin, winner of the 1928 Pulitzer Prize for her novel Scarlet Sister Mary. Like many of the Sunnyside retreats, live oaks were incorporated into the porch design, protruding through the roof. Pretend was later passed down to another family author, “Sister” Peterkin, who wrote Heaven Is A Beautiful Place.

During World War II, Garden City and the north end of Murrells Inlet were target ranges for B-52s and A-26s making gunning runs with 50-caliber machine guns, 75-mm canons and rockets. Current owner Bill Chandler, brother of “Sister” Peterkin, well remembers the “rain of bullets” and how as a child he severely burnt his hand picking up a hot bullet.

When the gable of Pretend was hit during one of the runs by a misfired 75-mm cannon, Julia Peterkin was duly upset and went to talk to the base commander about it. The commander was polite but reminded Mrs. Peterkin that the country was at war and if the residents of Sunnyside wanted to complain about the gunning, he would have everyone in Murrells Inlet evacuated. According to Bill Chandler, Sunnyside took up the cause and ceased the complaints.

“No one ever wanted to leave Sunnyside,” laughs Chandler. “It’s the pearl of Murrells Inlet. They’ll have to drag me out of here feet first.”

The Most Spirited Spot in Sunnyside?
And then there’s the other-worldly happenings at “The Bates Cottage,” built of lumber that washed up on the site in the “1893 Hurricane.” The timber was taken from a church by Dr. Ward Flagg to build his Garden City summer house, even though, according to old-timers, “local Negroes warned that the good Lord would not let a house stand built of the Lord’s timbers.”

Sure enough, “the ocean and river shook hands that day” of the great storm as the ocean surged inland and the Waccamaw River overflowed, meeting in Murrells Inlet and sweeping away the Flaggs’ Garden City cottage.

The Bates Cottage has been in the Harry G. Bates family since 1919 and children who have spent summers here have experienced bouts of sleepwalking, shocking adults by bringing them messages from ancestors long deceased. More than once when the cottage was particularly active with unseen guests, family members enlisted the help of exorcists and mediums.

Up a narrow staircase to the second floor loft, the children sleep on one of the six white iron beds with shuttered windows open on all four sides. And most who have spent the night here have heard the desperate calling-out of a child.

As the legend has been passed down, it was customary for black folk to catch fish and harvest shellfish from the inlet, take it to the cottagers and for a price they would clean the catch and cook breakfast and lunch. The cottagers loved this service and dinner was usually a plate of the leftovers.

A three-year-old came along with his family one day and while the others harvested the inlet, the child was firmly instructed to stay in the boat. But he couldn’t resist trying to catch a stone crab he spied in the water. His hand got caught in the crab’s hole and high tide rushed in, drowning him. According to Pat Bates, family children still hear the boy crying for help in the night.

Serene and sensational. Natural beauty and the supernatural. A busy road on one border and inlet waters on the other. A place of historic events and breathy legend, Sunnyside has been a special place to statesmen, authors and scalawags alike.

As Bill Chandler says, “Where else in the world would compare to Sunnyside?”