A Salute to the Tourist 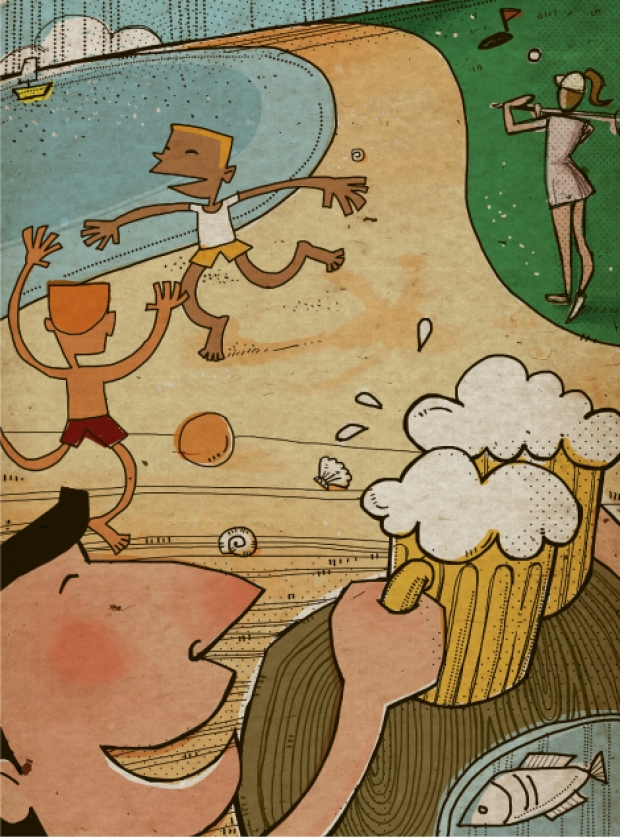 If there’s one common pastime among locals in every tourist town, it’s complaining about the suitcase-lugging hoards that descend upon those spots, clogging the roads and restaurants. From Key West to Asheville to Aspen, year-round residents grouse about the visitors: They can’t drive. They’re too loud. Too drunk. They treat this place like it’s their personal playground. They forget that some of us actually live here.

The Grand Stand is not immune to this grumbling, of course, and in the four and a half years since my wife and I moved to Conway, I’ve certainly done my share of bellyaching about the out-of-towners, especially when I’m running weekend errands, trying to hustle, say, from Lowe’s to the Carolina Forest Post Office to Wal-Mart, with two sweaty, thirsty kids in the backseat, and I’m so rushed and muddled that I’ve temporarily gone soft in the head, forgetting the cardinal rule of Grand Stand living: Always, no matter what, avoid U.S. 501 on summer Saturdays. I’ll freely admit that while stuck at the Singleton Ridge intersection for 10 minutes without making discernable progress, I’ve smacked my hand against the dash and cursed Saint Christopher and F.G. Burroughs.

But inconveniences like this are minor and temporary. The vast majority of the time, I enjoy living in the Myrtle Beach area precisely because of the millions of people who vacation here. I don’t say this because I own a hotel or a souvenir shop or any other business that is dependent upon the tourist dollar. I have no financial stake in the travel industry other than the interest all of us Grand Stand residents have in the economic health of the region. Instead, I love the high season because the tourists—be they teenagers chucking a football on the beach, a foursome laughing over oysters and beers, a father and daughter at the mini golf course—always look like they’re having a really great time. And call me big softy, but hey: I like living where folks are happy.

I grew up in Columbus, Ohio, which is as fine a hometown as any and better than most, but it’s not exactly a vacation wonderland. Columbus residents often say about their city, “It’s a nice place to live, but you wouldn’t want to visit.” Living in a place that people want to visit is new for me. I love it, and the tourists crystallize for me why I love it.

I love Myrtle Beach because—and I mean this in a good way—it’s kind of like a giant Chuck E. Cheese’s, which is to say, it’s built for amusement, and you can’t break it. Parts of the Grand Strand might not be as swanky as some other South Carolina resort areas, and sure, we’ve got more than our share of gaudy airbrush shacks and fireworks outlets, but I’ll happily tolerate a little tackiness in exchange for the Strand’s lack of snobbery and pretentiousness. Plus, because Myrtle Beach is accessible to nearly all income brackets, it’s more democratic than some of the snootier areas on the East Coast. Myrtle Beach is America’s Beach because most Americans can actually afford to come here.

Of course it’s unrealistic to think that all tourists are having a postcard-perfect visit at every moment. I’ve taken enough family trips to know that disagreements happen on vacation just as often as they do at home, possibly more so, because on vacation everybody is out of the usual routine, sharing closer quarters than normal, a little tweaked and tired. And granted, I don’t live right at the beach; I live 15 miles inland. Maybe I would be hesitant to praise tourists and their touristy-type fun if I lived next to a beach rental, and every morning, on my way out the door, I had to kick through a pile of empty beer cans and spent bottle rockets to get to my car.

It is true that vacationers and locals run on conflicting schedules. When we first moved to the Grand Strand, my wife and I were warned by long time residents, “Be careful. You’ll move here because of the beach. But then you’ll never have time to go there.” And sometimes, as I grind through the work week, I get a little jealous watching the tourists and all the fun they’re having. It’s like I’m looking through the window at a party I wasn’t invited to. And it’s a damn good party, made better because it will inevitably end. The vacationers only have so many days here, and then it’s back to real life. But living in a tourist-town reminds me that real life is also finite. There’s always a check-out time, and it always comes too soon.

So my wife, kids, and I try to get to the beach as often as we can, even on summer Saturdays, even if it means fighting traffic on 501. Stuck behind all those cars with license plates from Ohio and West Virginia and New Jersey, I tell myself that every one of those cars represents a family that has chosen to spend their precious vacation time with us, on our beautiful strip of sand, on our scenic waterways. Even as a relative newcomer to the area, I take pride in that. The long line of traffic might be a hassle, but it’s also is a measure of how lucky we are to call this place home.
---------------------------------------------------------------
Joe Oestreich is the author of Hitless Wonder: A Life in Minor League Rock and Roll. He teaches creative writing at Coastal Carolina University.