December 2014
Written By:
Paul Grimshaw
Tom Hilderbrand settles down on the Grand Strand after a high-flying career 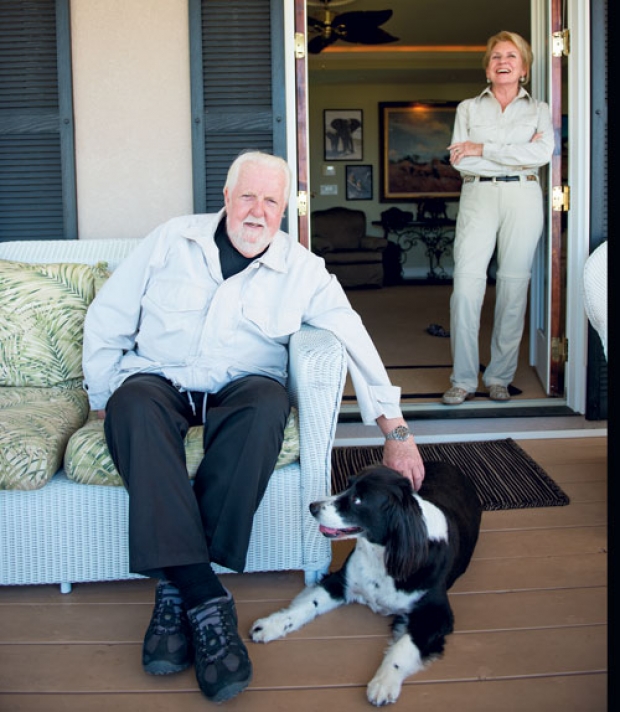 They’ve lived a life most would envy: traveling the U.S. and the world, raising two children and, finally, settling in North Myrtle Beach in a beautiful Intracoastal Waterway home. Tom and Jane Hilderbrand are only semi-retired, but find their priorities are friends, family, travel and regular visits to local dining establishments. For the Hilderbrands, living on the Grand Strand means living the good life, but getting here was clearly half the fun.

“I had been promising Jane a trip to Africa over the past 45 years of our marriage,” said Tom Hilderbrand, a location scout, photographer and former Director of Photography for ABC’s The American Sportsman, among many other high-flying film and video production jobs. “It was a bucket list trip, one I had promised her since my days with [ABC].”

The Hilderbrands spent three weeks in Africa last spring, but the trip was just one of many memorable treks into the great unknown, a pattern the couple has enjoyed for many decades.

Tom Hilderbrand, 77, is warm and inviting and quick to laugh, with snow-white hair and beard to match. His wife, Jane, is seven years his junior and is poised, confident and the consummate hostess. They live with their rescue dog, Angel. Two grown children, a boy and a girl, live in Atlanta and Las Vegas, respectively.

On the couple’s second-story outdoor deck, watching the sunset with a glass of red wine, the Hilderbrands recount their lives together over the better part of five decades. Their home, overlooking the Intracoastal Waterway in North Myrtle Beach, is filled with memorabilia, photos, autographed movie posters and fine art collected over a lifetime that, especially for Tom, involved constant travel to far flung locales around the world, and, for the couple, several long stints from one end of the U.S. to other.

Born in the small farming community of Clayton, Indiana, Tom Hilderbrand attended Indiana University and worked through college sweeping floors in a television station. One fortuitous day he said “Yes” to a lucky opportunity to operate a camera, thus beginning a nearly 60-year career behind the lens. “I knew a little bit about photography,” recalled Hilderbrand, “and had enough knowledge and worked cheap enough so they hired me on. NBC picked up the coverage of a big murder trial I was shooting and then later invited me to Chicago, which scared me to death. I moved back to Indianapolis, then to Minneapolis, stayed at that NBC-owned station for a couple of years, then had a two-year stint in the U.S. Army. They sent me to film school, and then I taught photography [for the U.S. Army]. I went back to KSTP [in Minneapolis] after the Army and started shooting aerial stuff from helicopters, long before it was popular. I got pretty good at it and was developing a bit of a reputation.”

Hilderbrand obtained a multi-engine, fixed-wing pilot’s license many years ago, and will fly again as soon as the Federal Aviation Authority clears him on medical conditions after he had a pacemaker implanted two years ago. Jane Hilderbrand also flies. She’s made it through the solo flight portion of her training, but not quite to full licensure. “We love to fly, always have,” said Tom Hilderbrand.

Sitting on a nearby table, a four-prop helicopter drone with a small digital camera attached sits waiting for the FAA to rule on commercial use. Hilderbrand shoots commercial and real estate photography assignments throughout the Grand Strand.

“So after the Army I shot freelance film for the NFL and had an opportunity for ABC to go shoot the National Ice Boat races in Wisconsin. If you’ve ever hung out of a helicopter with the door off in the middle of a Wisconsin winter, it’s cold.”

ABC flew Hilderbrand to New York City to pitch a new show, The American Sportsman, and he signed on. He stayed with the highly rated program for seven years flying around the world, filming celebrities and sports stars on their hunting and fishing trips. A still photo of Hilderbrand with Bing Crosby hangs on the wall of their home, as the men huddle around a shortwave radio in 1969, in Iceland, taking a break from filming to listen to the moon landing. He worked with dozens of other celebrities and sports superstars including Andy Griffith, Catfish Hunter, Mickey Mantle and others. “It was a fun ride.”

As his time with The American Sportsman came to a close, he decided he didn’t want to spend another eight to ten months per year on the road, and with a newly pregnant wife, he decided to settle in Tucson, Arizona.

“We lived in Tucson for 21 years,” he recalled. “I was a location scout and assistant in the City Manager’s office. Part of my job was scouting locations for major motion pictures—Tombstone, Harley Davis and the Marlboro Man, Tin Cup and a bunch of others.”

So why the Grand Strand?

“Jane is from North Carolina,” said Hilderbrand. “Her grandfather had a cottage here for many years, and both our mothers were on the East Coast and getting older. But even when Jane and I were just visiting we always loved Myrtle Beach. We bought a condo and came back and forth when we were living in Tucson.”

With the failing health of their mothers, the Hilderbrands moved permanently to the Grand Strand in 1998.

Finally, with time to devote to still photography, Hilderbrand has been shooting scenic and wildlife subjects including stills of his bucket list trip to Africa, local wildlife and a one-of-kind photomontage of the Sunset Beach, North Carolina, bridges, new and old. “I have a good time,” he said pointing out some of his favorite photos.

“When we first moved here, we had a boat, played golf, but got that old quick. I wanted back in.” Hilderbrand embraced the digital photography that replaced the 35mm and film stock motion picture photography of his early career.

“We love to travel, go to Jamaica and rent a house. We’ve been to Hawaii. I like to target shoot in Conway. We do short trips to Wilmington and Southport, North Carolina, and Charleston. But I still dabble and work when I can. Just last week I chartered a helicopter for a shoot.”

Though the work always tugs, their spot on the porch watching life on the Intracoastal Waterway tugs just as hard. “We really do love it,” said Hilderbrand. “You see the damndest things from this porch.”