Most travel-savvy locals can say they’ve been to, or at least through, North Carolina’s capital city, Raleigh. But few know that Raleigh wasn’t the Tar Heel State’s first capital, or that New Bern, a small historic city 112 miles to its east, was the fledgling colony’s first government seat. This historic, quaint and well-preserved Colonial-era city was settled by the Swiss in 1710, survived the U.S. Revolution, occupation by Federal forces during the U.S. Civil War, and may be one of the best-kept secrets less than a three-hour drive from North Myrtle Beach. With its historic downtown filled with antique shops, fine art galleries, modern lodgings, superior B&Bs, excellent restaurants and more surprises than you might imagine, New Bern should be on every Grand Strander’s getaway list, especially at Christmastime.

While most of us know Coca-Cola was first invented as a patent medicine in Atlanta, how many of us know the origin story of its closest competitor, Pepsi-Cola? Invented by Caleb Bradham in 1898, a humble-but-enterprising pharmacist from New Bern, his concoction was first called “Brad’s Drink,” and the building that housed his laboratory on the corner of Middle and Pollock streets still stands. Though the pharmacy business is gone, The Pepsi Store continues to sell the namesake drink and, of course, more Pepsi memorabilia than anyone might need in a lifetime.

A short walk from downtown, the massive Georgian-style Tryon Palace, originally built in the 1760s as the opulent (for its time) provincial government headquarters, stands majestically and plays host to year-round tours and events and offers a taste of Colonial life. Within the 22-acre site, living history demonstrations by costumed interpreters accurately depict day-to-day life in the late 1700s with a working blacksmith shop, a working kitchen, Colonial-era homes and more.

Originally built as the first Royal Governor William Tryon’s Palace, the subsequent Royal Governor fled as the patriots approached in 1775. After the Revolution, the Palace served as North Carolina’s first State House through 1792. Though the original palace burned in 1798, the enterprising people of New Bern raised funds in the 1950s to painstakingly recreate and rebuild Tryon Palace to its original magnificence. Tours and private functions keep the Palace as busy as it was during its original years standing in the 1700s. Tour information is available by calling (800) 767-1560 (529 Front St.)

The Swiss and Germans, who named the town “Bern” in deference to Bern, Switzerland, settled New Bern, the second oldest town in North Carolina. Both cities use “Bern,” which is the Germanic word for “Bear,” thus the unavoidable bear-related imagery seen nearly everywhere.

Though New Bern has plenty of modern lodging options, including Hampton Inn, DoubleTree, Courtyard New Bern and motels along the roads in and out of town, consider a B&B in the heart of the historic district for the true flavor of New Bern in a way that only a local host can offer.

Built in 1882, The Aerie Bed & Breakfast Guest House offers elegant accommodations with nine bedrooms in the main house, ornate turn of the century and late Victorian décor, modern amenities, over-the-top creature comforts and home-cooked gourmet breakfasts by the proprietors Michael and Marty Gunhus. The Aerie is in the Select Registry of B&Bs and has been awarded three diamonds by AAA. An affiliated conference center across the street hosts corporate functions and retreats. After a good night’s rest and a hearty breakfast, it’s a pleasant walk or a short drive to many of New Bern’s 150 historic sites, all on the National Register of Historic Places. (509 Pollock St.)

Somewhat surprising in a city of less than 30,000 residents, New Bern is home to the North Carolina History Center, a sprawling modern museum with state-of-the-art interactive displays celebrating coastal North Carolina’s diverse history. As a stand-alone visit or a start to a Tryon Palace tour, the NCHC is a must see while in town. A modern masterpiece of design, the NCHC is considered to be one of the “greenest” public buildings in the state. So closely tied to the land, rivers and the sea, careful planning and design lead to permeable surface parking areas, restored wetlands and eco-friendly heating and cooling, but it’s what’s on display that’s so remarkable.

Regional history comes alive through photographs and dramatized exhibits. You’ll learn that New Bern was home to the largest refugee camp of escaped and freed slaves in the U.S. as word spread that the Yankees were coming in 1862. It was here that former slaves were first recruited into the U.S. Army.

Four large exhibit halls cover the maritime and mercantile history of Pamlico Sound, the area’s rivers and the Outer Banks. Traveling exhibits come and go and relate to the arts, culture and history of North Carolina. www.tryonpalace.org

Much has been written about the coastal regions of North Carolina, but no one has captured the drama, melodrama and angst of life on the coast any better than romantic-drama novelist, screen writer and producer Nicholas Sparks, who is responsible for 18 novels, three of which have scenes set in New Bern, and others in nearby communities. Sparks has sold some 60 million books, and 11 of his novels became Hollywood gold with box office grosses of some $300 mil.

A New Bernian since 1989, the altruistic Sparks donated $9 million to the local high school and has been seen assisting track & field coaches. It’s local lore that Sparks, while volunteering at a New Bern senior center, found his inspiration for The Notebook, the novel and film that launched his career in earnest some 20 years ago.

Eat, Drink and be Beary

As a tourist-friendly locale and the biggest town in the immediate region, New Bern has an eclectic array of dining options, from breakfast and bagel joints to quaint cafes with sidewalk tables, sports bars, neighborhood taverns and casual upscale waterfront dining.

Persimmons Waterfront Restaurant has a loyal following in part because of its location on the Neuse River, the casual, open atmosphere and the food, a blend of New American cuisine with an emphasis on seafood specialties. (100 Pollock St.)

More casual still, Morgan’s Tavern & Grill is set in an old garage with exposed brick and wood beams, an outdoor patio, simple and fresh meals for lunch and dinner and a wide variety of craft beers. (235 Craven St.)

With specialty outdoor stores catering to an active community of hikers, bikers, bird watchers and naturalists, one might wonder where they’re all going. Besides the urban trekking and bike rental shops (in nicer weather), many use New Bern as their trailhead on trips to the adjacent Croatan National Forest.

Should I Stay or Should I go?

As you weigh your options for getaways from our own little piece of paradise here on the Grand Strand, consider New Bern, and its surrounding environs, for a nearby taste of coastal diversity and little-known history from our neighbors to the north. 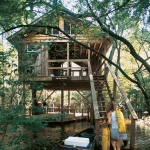 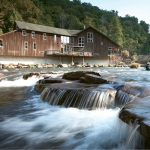 Refresh your fast-paced family life with a slow song in Bryson City, N.C. 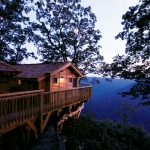