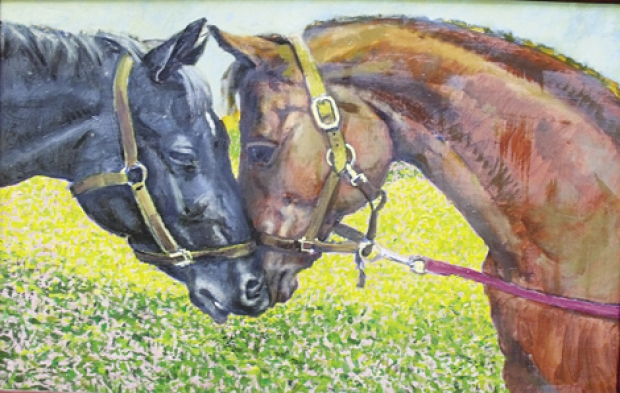 A stallion and a mare at a rescue stable in New York inspired Abeles to create this oil-on-panel work, “Nuzzling Pair.”

From a childhood spent watching people come and go at his mother’s Myrtle Beach rooming house, Sigmund Abeles has built a career as world-class artist and teacher that spans more than 50 years. Now, with his most recent project, he adds the title of curator to his resume.

Abeles partnered with the Columbia Museum of Art (CMA) to serve as guest curator on its major summer presentation of 2011, titled An Artist’s Eye: A Journey through Modern and Contemporary Art with Sigmund Abeles. A grouping of Abeles’ own work, titled It Figures: the Art of Sigmund Abeles, ran concurrently with the exhibit. Grand Strand residents will enjoy direct access to both these exhibits when they move to the Franklin G. Burroughs-Simeon B. Chapin Art Museum this fall. The exhibit opens here on October 4.

Abeles’ work focuses on the human form, as well as horses, and encompasses pastels, oils, sculpture and graphic media. His artistic career, which began in 1955 with a degree in fine arts from the University of South Carolina, includes 27 years of teaching and serving as Professor Emeritus at the University of New Hampshire. His work is displayed in the collections of the Metropolitan Museum of Art, the Boston Museum of Fine Arts, the Philadelphia Museum, the Whitney Museum of American Art, and, locally, Brookgreen Gardens. 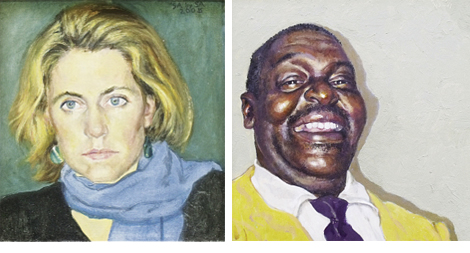 “Shanna in Blue Scarf” is a portrait of his daughter. “Myrtle Beach Gullah Bartender” is rooted in memory from a trip to the Grand Strand.

The idea of an artist, rather than a curator or art historian, producing an exhibit is an innovative concept; this is the first time the CMA, under the direction of former curator Todd Herman, has embarked on such a project. Why does it work?  Because of the unique complexity and depth of Abeles’ experience, knowledge and talent.

The purpose of the exhibit is to allow the viewer to experience art, and the way it is presented, from the lens of an artist rather than a scholar. Kay Teer, curator of the Franklin G. Burroughs-Simeon B. Chapin Art Museum, says Abeles is the perfect candidate to lead the viewer through the artistic experience and to bring it to Grand Strand viewers.  “It's very rare indeed,” Teer says, “for an artist to be asked to curate an exhibit from a museum’s collection, but Sig is a very special man. He is an extraordinary artist, a well-respected teacher, a consummate collector, has an incredible memory and can express himself so articulately about art and artists and his relationships with both. His connection with the Columbia Museum of Art, dating back to the ’50s when he was a student at USC, is most poignant, and of course his love and affection for Myrtle Beach are always foremost in his mind and heart.”

Born in New York, Abeles moved to the Grand Strand as a toddler and paints a vibrant verbal picture of his formative years as he sought engagement with his two passions: horses and art. In the 1940s, he interacted with horses at local farms and stables in any way possible—riding, exercising horses and escorting riders. Abeles recalls, “The really wonderful experience was in my earliest teens when I landed a super job as an exercise boy at the local race track (the only white exercise boy, I might add). Imagine getting to breeze huge snorting thoroughbreds in a foot and half of ocean water for a mile or more before school, and yes, laughing all the way!”

While structured art classes were not offered at Abeles’ public school, he was drawn to the vast, natural and expansive source of artistic creativity available at Brookgreen Gardens. “It was my earliest influence, my first awareness of art,” Abeles says. There he sat for hours studying the sculpture, including the work of Henry Clews, and teaching himself to sketch; this experience would root his career as a figurative artist.
Abeles’ mother ran a rooming house in Myrtle Beach, so his boyhood home was a place of people coming and going, faces and figures that lingered, sat, ate, interacted and moved on. Sitting on the stairs of the rooming house as a silent observer, the young Abeles became attuned to the actions and rituals of humans going about daily life. “In a certain sense, it was the strangers—looking at people who came in and out—that was a very big part of my upbringing,” Abeles states. 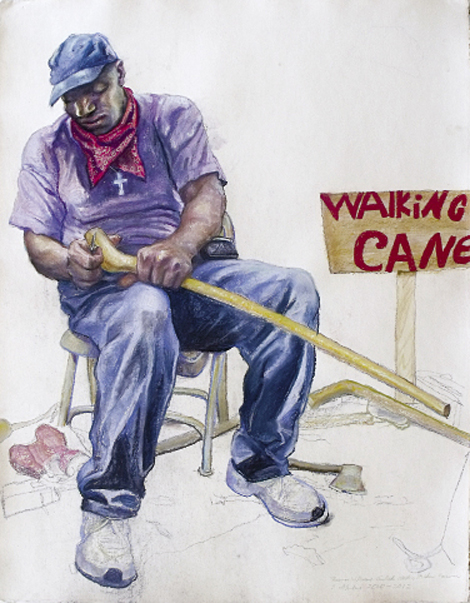 “Thomas Williams, Gullah Walking-Stick Carver” is a portrait of a legendary craftsman from Mt. Pleasant.

The artist’s unique act of collecting pieces for An Artist’s Eye was a labor of love. He knew many of the artists personally and was active in the art world himself when the works were created. With Abeles’ experience and perspective, in addition to his penchant for writing, he has created for the exhibit extensive and insightful labels for each piece that offer much more than the standard time, date or artistic context. Many of the labels include anecdotes about the artist or even the curator’s personal memories.

This endeavor too, Abeles notes, is rooted in his Southern upbringing and familiarity with its culture. “The true art of the Southerner is the story, the writer,” Abeles explains, “so I try to tell stories with my pictures, and with these labels I was able to attach a story to the visual medium.”
Abeles will be present for the opening of the upcoming exhibit in Myrtle Beach, and he’s looking forward to having a Grand Strand audience for his work: “It’s my home state, and I feel it very deeply.”