December 2014
Written By:
Paul Grimshaw
The Holy City welcomes all for its holiday festivities 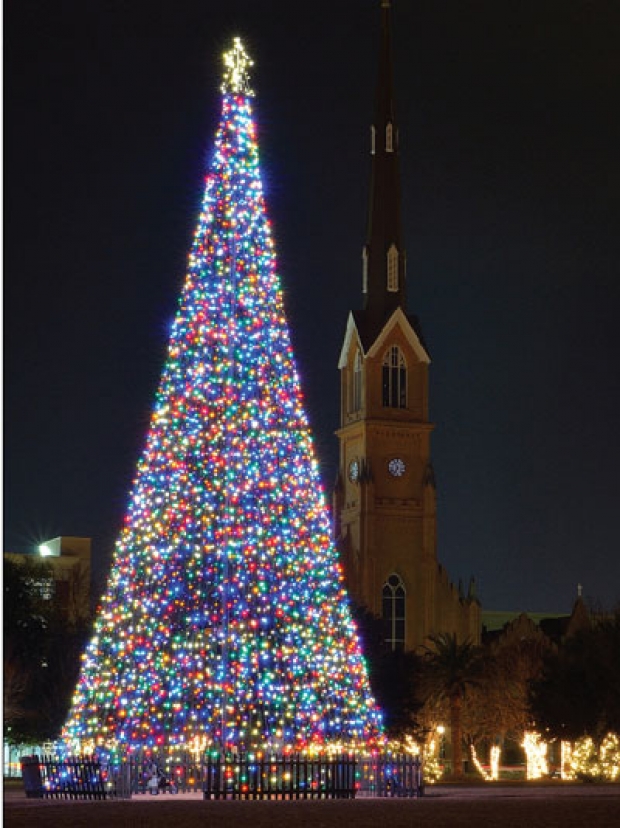 The holidays, Christmas in particular, encourage the time-honored traditions of visiting family and friends, near and far, or having them visit you right where you may be sitting. But for a variety of reasons, not everyone has the ability, need or desire to take long road trips or fight the madness in urban airports or expect visitors on their doorstep. So what’s a liberated and free-to-roam Grand Strander to do? Head north into the mountains of North Carolina? Sure, that’s Christmassy. Stay home and catch a Christmas show at one of our local Grand Strand theaters? Also a good idea, and always good for bolstering a sagging holiday spirit. Or you could do what I’ve done the past few years—head to Charleston for a holiday getaway, where the Shrimp & Grits capital of the South serves up Christmas on a historic holiday platter.

Not only is the historic district of Charleston downright Dickensian at Christmas (and what’s more Christmassy than that?), but it’s also loaded with fabulous shopping and Christmas-themed theater in the form of holiday plays and musicals. The streets, storefronts and fine hotels are rife with holiday décor, and the city is well known for its world-class accommodations and restaurants. You’ll even find a strong emphasis on the spiritual—Charleston is the “Holy City” after all, boasting hundreds of churches in the greater metro area and around 20 on the historic peninsula, many with wonderful Christmas programs.

Charleston manages to keep Christmas well—while also keeping travel easily manageable for Grand Stranders taking to the road—at just two hours south of Myrtle Beach on U.S. 17. Though not as vibrant (or manic) as New York City at Christmas, or as quiet and quaint as a small country village, Charleston captures the essence of Christmas magic through its 344-year-old history, its Southern charm, and even with rare snow flurries and the sometimes crisp weather so associated with the holiday, giving nostalgic Yankees reason to tear up.

Any Charleston getaway should start with a hotel reservation, as it’s not uncommon that the best rooms are difficult to find. Though rarely sold-out, the hotels are busy at Christmas, especially the three-to-five-star historic district inns such as The Francis Marion Hotel, the Wentworth Mansion, and the Mills House, among many others.

Bed-and Breakfast lodgings offer even more quaintness, and, like the area hotels, B&B rooms can be hard to find at Christmas and New Year’s. The Barksdale House Inn, The Historic 86 Church Street B&B, the 27 State Street B&B, the boutique Fulton Lane Inn, along with other smaller hotels can offer a great romantic getaway for around the same price (sometimes much less) than one of the fine hotels. On a budget? No problem as Charleston offers plenty of rooms between $80–$125 per night, though you’ll probably have to stay off the peninsula, but still only a few minutes from historic downtown.

Once your lodgings are in place you’ll want to get out on the town.

Theater tickets, also at a premium around the holidays, should be purchased in advance as well. Charleston boasts a few venerable old theaters with long-standing community and professional troupes producing holiday shows.

The Charleston Christmas Special 2014 runs December 5–21 at the Charleston Music Hall, and local Americana rock favorites The Blue Dogs will perform at the theater December 27–28.

A Sweet T Christmas runs from November 28–December 27 at the Black Fedora Comedy Mystery Theatre on Church Street and is said to be a “laughingly lovely story of a heavenly stranger, a hapless handyman, a hopeless hostess, and a hopping-mad Santa,” in a show back for its third season.

The Charleston Stage presents The Best Christmas Pageant Ever, (December 13 & 20) depicting the tale of the “worst kids in town, somehow wrangling the leading roles in the holiday Christmas pageant,” showing at the Dock Street Theatre, along with the Dickens’ classic A Christmas Carol (December 5–21).

Locals to the Lowcountry of the Charleston region have been visiting the “Holiday Festival of Lights” at the James Island County Park for 24 years, this year being the 25th anniversary. More than 2 million lights in 700 displays decorate the park in a drive-through extravaganza that would make even Clark Griswold blush. Pause your trip halfway through for kiddy rides, visits with Santa, holiday souvenirs, hot chocolate, roasting marshmallows and more. (through January 1)

With your lodging and entertainment planned, now you can focus on the heart of the holidays—dining out.

Volumes could be (and have been) written about Charleston’s long love affair with food. With her restaurants taking top honors from Southern Living, Fodor’s, Bon Appetit, Trip Advisor, Zagat, Travel & Leisure, various television programs, and by all manner of food critics, Charleston’s reputation as a foodie destination is well deserved. Here you’ll find something for every budget and taste, from seafood restaurants, steak and chop houses, Asian fusion restaurants and budget-friendly chains.

One of my favorites is 39 Rue de Jean (39 John St.). Located conveniently across from the Visitor’s Center (375 Meeting St.), this French café serves authentic French cuisine for lunch and dinner with nightly specials and has a lunch menu so affordable it will surprise you.

Rich dark wood interiors, fresh, white butcher paper on the tables and snappy service are the hallmarks of this two-story brick warehouse from the 1880s converted to the brasserie-styled restaurant, which opened in 2001. Regularly voted “Best French Restaurant” by the Charleston City Paper, “Rue,” as it’s known by the locals, is representative of Charleston’s commitment to food service excellence.

Many of the medium-sized and almost all of the larger hotels have fine restaurants within, making them a good option, as well.

Charleston continues to enchant first-time visitors and returning regulars who love the history, the pre-revolutionary and antebellum architecture, and even the college-town party-hearty energy of King Street and its many pubs featuring live music.

It’s worth starting your trip at the Visitor’s Center, which is part museum and part shuttle stop for the many guided tours offered.

While Charleston is fun to visit year-round, it takes on a special charm at Christmas, as nearly four centuries of history help to meld European and African cultures, traditions, religions, and cuisines into something uniquely American and very Southern.