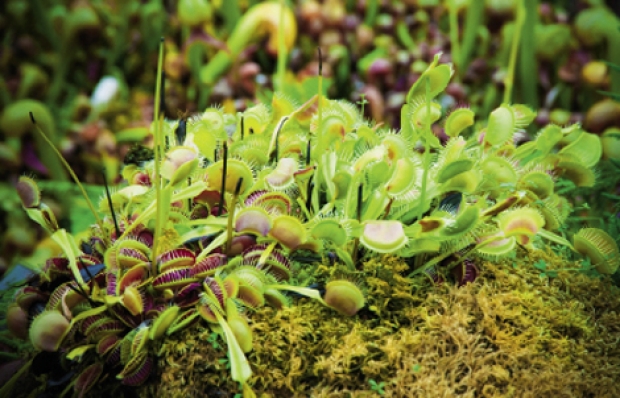 Less than a second after a fly brushes twice against its tiny bristles, the bear-trap shaped leaf of the Venus flytrap closes around the insect. For the next several days, the plant ingests life-giving protein. Living in the acidic soil of a Carolina Bay or similar wetlands, Venus flytraps eat ants, mosquitoes, flies, spiders and similar insects; although one commercial grower has seen them consume lizards.

The Venus flytrap has been successfully transplanted and grown around the world, but it is found natively only within a 60-mile radius of Wilmington, N.C. Myrtle Beach is on the outer limits of its natural habitat. The carnivorous Venus flytrap has steadily been losing its natural habitat to development. One of the last major stands existed in the tract that is now Barefoot Resort. Fortunately, the adjoining 9000-acre Lewis Ocean Bay Heritage Preserve is also home to these carnivorous plants.

A South Carolina Forestry Commission report of the 2009 wildfire said that within a week of the fire’s start, Venus flytraps and other plants were emerging from the ashes.

Other populations exist in the Green Swamp Preserve and in isolated sections of New Hanover County. Rangers at Carolina Beach State Park take visitors on an educational tour of that park’s population at least monthly.

While some varieties of the plant appear headed for extinction due to habitat development and poaching, others are thriving in commercial cultivation thanks to businesses like Flytrap Farm in Civietown, just north of Shallotte in Brunswick County. Flytrap owner Joe Wood explained that the state sells permits to individuals who may collect flytraps from the wild as long as they are on private property and have the permission of the property owner. Collection from public properties is prohibited. Those collectors, many of whom he said have been doing it for generations, sell to businesses like his own.

He sells to a large database of businesses, mostly mom & pop shops, and to overseas buyers. “Most of my plants go to 2,000 names I have through the Internet. We already have close to 200,000 plants sold for this year–all in the U.S. I don’t ship to big box stores. Everything goes to small shops like Ace Hardware or a party store.” Those stores sell them to individuals at about $5 each. Grown in moist peat, the plants perpetuate themselves through seeds and have been known to live for 20 to 30 years. While they need to be outdoors to collect insects, they should be brought inside if the temperature reaches freezing. They require rainwater (no chlorine or other treatments) and infrequent fertilization with a good 20-10-20 mixture.

Touring one of his three greenhouses, Wood, 72, displayed several flytraps that he had bought from the Netherlands. It’s a rather remarkable cycle.


Collectors package the plants for brokers who ship plants overseas. Growers in the Netherlands use tissue cultures to produce thousands of plants from one, then ship them back to Florida where “they’re grown out.” Then they go to individual businesses like his own where they’re grown for several more weeks before being shipped to retailers who sell them to collectors and other plant enthusiasts.

• They have trigger hairs, that serve as a primitive motion detector for the plant

• Once the trap fully closes, the leaves form an airtight seal so that digestive fluids and insect parts are kept inside the trap, and bacteria and molds can't get in

• To learn how to grow, visit
http://science.howstuffworks.com/environmental/life/botany/venus-flytrap...